By definition, a system that does not have this property is said to have memory.

How can we identify if a system has memory?

For a memoryless system, changing the input at any instant can change the output only at that instant. If, in some case, a change in input signal at some instant changes the output at some other instant, we can be sure that the system has memory.

While at first glance, the system might appear to have memory, it does not. This brings us to the idea that given the description of a system, it need not at all be the most economical one. The same system may have more than one description.

2. System with description y[n] = x[n-5] has memory. The input at any "instant" depends on the input 5 "instants" earlier.

also has memory. The output at any instant depends on all past and present inputs.

(It is not necessary for the input and output signals to have the same independent variable for linearity to make sense. The definition for systems with input and/or output signal being discrete-time is similar.)

A capacitor, an inductor, a resistor or any combination of these are all linear systems, if we consider the voltage applied across them as an input signal, and the current through them as an output signal. This is because these simple passive circuit components follow the principle of superposition within their ranges of operation.

Linearity can be thought of as consisting of two properties:

A system is said to be additive if for any two input signals x1(t) and x2(t),

i.e. the output corresponding to the sum of any two inputs is the sum of the two outputs.

A system is said to be homogenous if, for any input signal X(t),

i.e. scaling any input signal scales the output signal by the same factor.

To say a system is linear is equivalent to saying the system obeys both additivity and homogeneity. a) We shall first prove homogeneity and additivity imply linearity

b) To prove linearity implies homogeneity and additivity.

This is easy; put both constants equal to 1 in the definition to get additivity; one of them to 0 to get homogeneity.

Additivity and homogeneity are independent properties.

We can prove this by finding examples of systems which are additive but not homogeneous, and vice versa.

Again, y(t) is the response of the system to the input x(t).

Example of a system which is additive but not homogeneous:

[ It is homogeneous for real constants but not complex ones - consider

Example of a system which is homogeneous but not additive:

[From this example can you generalize to a class of such systems?]

2) The system with description

See for yourself that the system is neither additive, nor homogenous.

Show for yourself that systems with the following descriptions are linear:

This is another important property applicable to systems with the same independent variable for the input and output signal. We shall first define the property for continuous time systems and the definition for discrete time systems will follow naturally.

i.e. for every permissible x(t) and every t0

In other words, for a shift invariant system, shifting the input signal shifts the output signal by the same offset 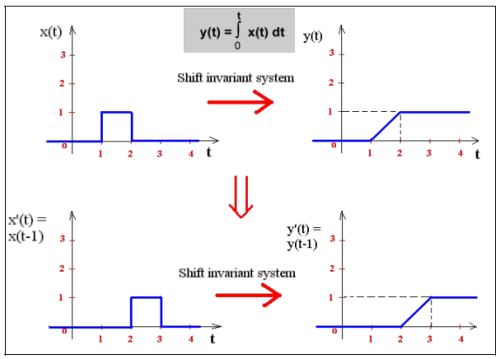 Note this is not to be expected from every system. x(t) and x(t - t0) are different (related by a shift, but different) input signals and a system, which simply maps one set of signals to another, need not at all map x(t) and x(t - t0) to output signal also shift by t0

A system that does not satisfy this property is said to be shift variant.

Let us learn about one more important system property known as stability. Most of us are familiar with the word stability, which intuitively means resistance to change or displacement. Broadly speaking a stable system is a one in which small inputs lead to predictable responses that do not diverge, i.e. are bounded. To get the qualitative idea let us consider the following physical example.

There are various ideas/notions about stability not all of which are equivalent. We shall now introduce the notion of BIBO Stability, i.e. BOUNDED INPUT-BOUNDED OUTPUT STABILITY. Statement:

This should be true for all bound inputs x(t). It is not necessary for the input and output signal to have the same independent variable for this property to make sense. It is valid for continuous time, discrete time and hybrid systems.

Consider systems with the following descriptions. y(t) is the output signal corresponding to the input signal x(t).