The inverter that uses a p-device pull-up or load that has its gate permanently ground. An n-device pull-down or driver is driven with the input signal. This roughly equivalent to use of a depletion load is Nmos technology and is thus called ‘Pseudo-NMOS’. The circuit is used in a variety of CMOS logic circuits. In this, PMOS for most of the time will be linear region. So resistance is low and hence RC time constant is low. When the driver is turned on a constant DC current flows in the circuit. Logic consumes no static power in CMOS design style. However, signals have to be routed to the n pull down network as well as to the p pull up network. So the load presented to every driver is high. This is exacerbated by the fact that n and p channel transistors cannot be placed close together as these are in different wells which have to be kept well separated in order to avoid latchup. 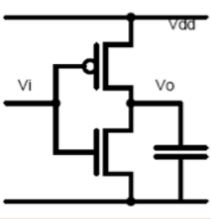 The CMOS pull up network is replaced by a single pMOS transistor with its gate grounded. Since the pMOS is not driven by signals, it is always ‘on'. The effective gate voltage seen by the pMOS transistor is Vdd. Thus the overvoltage on the p channel gate is always Vdd -VTp. When the nMOS is turned ‘on', a direct path between supply and ground exists and static power will be drawn. However, the dynamic power is reduced due to lower capacitive loading.

As we sweep the input voltage from ground to , weencounter the following regimes of operation:

substituting the values of V1 and V2 and choosing the sign which puts V0 in the correct range, we get

The nMOS is now in its linear mode of operation. The derived equation does not apply beyond this input voltage.