The document Public Debt - Public finance Notes | Study Public Finance - B Com is a part of the B Com Course Public Finance.
All you need of B Com at this link: B Com

In India, public debt refers to a part of the total borrowings by the Union Government which includes such items as market loans, special bearer bonds, treasury bills and special loans and securities issued by the Reserve Bank. It also includes the outstanding external debt.

However, it does not include the following items of borrowings:

The aggregate borro­wings by the Union Government—comprising the public debt and these other borrowings — are generally known as ‘net liabilities of the Government’.

In such countries the government debt has a very simple relationship to the government deficit the increase in debt over a period (say one year) is equal to its current budgetary deficit. But, in India, the term is used in a different sense.

The State generally borrows from the people to meet three kinds of expenditure:

(a) to meet budget deficit,

It is not always proper to effect a change in the tax system whenever the public expenditure exceeds the public revenue. It is to be seen whether the transaction is casual or regular. If the budget deficit is casual, then it is proper to raise loans to meet the deficit. But if the deficit happens to be a regular feature every year, then the proper course for the State would be to raise further revenue by taxation or reduce its expenditure.

In many countries, the existing public debt is, to a great extent, on account of war expenses. Especially after World War II, this type of public debt had considerably increased. A large portion of public debt in India has been incurred to defray the expenses of the last war.

During British rule in India public debt had to be raised to construct railways, irrigation projects and other works. In the post-independence era, the government borrows from the public to meet the costs of development work under the Five Year Plans and other projects. As a result the volume of public debt is increasing day by day.

The Burden of Public Debt:

When a country borrows money from other countries (or foreigners) an external debt is created. It owes its all to others. When a country borrows money from others it has to pay interest on such debt along with the principal. This payment is to be made in foreign exchange (or in gold). If the debtor nation does not have sufficient stock of foreign exchange (accumulated in the past) it will be forced to export its goods to the creditor nation. To be able to export goods a debtor nation has to generate sufficient exportable surplus by curtailing its domestic consumption.

Thus an external debt reduces society’s consumption possibilities since it involves a net subtraction from the resources available to people in the debtor nation to meet their current consumption needs. In the 1990s, many developing countries such as Poland, Brazil, and Mexico faced severe economic hardships after incurring large external debt. They were forced to curtail domestic consumption to be able to generate export surplus (i.e., export more than they imported) in order to service their external debts, i.e., to pay the interest and principal on their past borrowings.

The burden of external debt is measured by the debt-service ratio which returns to a country’s repayment obli­gations of principal and interest for a particular year on its external debt as a percentage of its exports of goods and services (i.e., its current receipt) in that year. In India it was 24% in 1999. An external debt imposes a burden on society because it represents a reduction in the consumption possibilities of a nation. It causes an inward shift of the society’s pro­duction possibilities curve.

When we shift attention from external to internal debt we observe that the story is different.

(1) Distorting effects on incentives due to extra tax burden,

(2) Diversion of society’s limited capital from the productive private sector to unproductive capital sector, and

(3) Showing the rate of growth of the economy

These three problems may now be briefly discussed:

1. Efficiency and Welfare Losses from Taxation:

When the government borrows money from its own citizens, it has to pay interest on such debt. Interest is paid by imposing tax on people. If people are required to pay more taxes simply because the government has to pay interest on debt, there is likely to be adverse effects on incentives to work and to save. It may be a happy coincidence if the same individual were tax-payer and a bond-holder at the same time.

But even in this case one cannot avoid the distorting effects on incentives that are ines­capably present in the case of any taxes. If the government imposes additional tax on Mr. X to pay him interest, he might work less and save less. Either of the outcome — or both — must be reckoned a distortion from efficiency and well-being. Moreover, if most bond­holders are rich people and most tax-payers are people of modest means repaying the debt money redistributes income (welfare) from the poor to the rich.

Secondly, if the government borrows money from the people by selling bonds, there is diversion of society’s limited capital from the productive private to unproductive public sector. The shortage of capital in the private sector will push up the rate of interest.

In fact, while selling bonds, the government competes for borrowed funds in financial markets, driving up interest rates for all borro­wers. With the large deficits of recent years, many economists have been concerned in the competition for funds; also higher interest rates have discouraged borrowing for private investment, an effect known as crowding out.

By diverting society’s limited capital from productive private to unproductive public sector public debt acts as a growth-retarding factor. Thus an economy grows much faster without public debt than with debt.

When we consider all the effects of government debt on the economy, we observe that a large public debt can be detrimental to long-run economic growth. Fig. 22.3 shows the relation between growth and debt. Let us suppose an economy were to operate over time with no debt, in which case the capital stock and potential output would follow the hypothetical path indicated by the solid lines in the diagram. 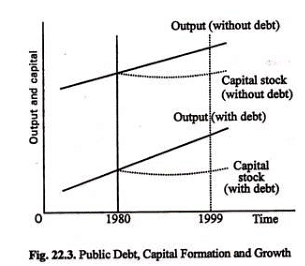 Now suppose the government increase a huge deficit and debt; with the accumulation of debt over time, more and more capital is displaced, as shown by the dashed capital line in the bottom of Fig. 22.3. As the government imposes additional taxes on people to pay interest on debt, there are greater inefficiencies and distortions — which reduce output further.

What is more serious is that an increase in external debt lowers national income and raises the proportion of GNP that has to be set aside every year for servicing the external debt. If we now consider all the effects of public debt together, we see that output and consumption will grow more slowly than in the absence of large government debt and deficit as is shown by comparing the top lines in Fig. 22.3.

This seems to be the most important point about the long-run impact of huge amount of public debt on economic growth. To conclude with Paul Samuelson and W. D. Nordhaus: “A large government debt tends to reduce a nation’s growth in potential output because it displaces private capital, increases the ineffi­ciency from taxation, and forces a nation to service the external portion of the debt.”

There is no doubt a feeling among some people that interest payment on the national debt repayment is a drain on the nation’s limited economic resources. It is pure waste of our resources to use them to pay interest on the debt.

This argument is wrong because interest payment on the debt — if domestically held —do not prevent a use of economic resources at all. It is, of course, true that if our debt is held by foreigners, we will suffer a loss of resources.

In the case of domestically held (internal) debt, internal payment on the debt involves a transfer of income from Indian taxpayers to Indian bondholders of the same generation. Since, in most cases, taxpayers and bond­holders are different entities, a large national debt inevitably involves income redistri­bution effects. But internal debt does not involve any using up of the nation’s real economic resources. 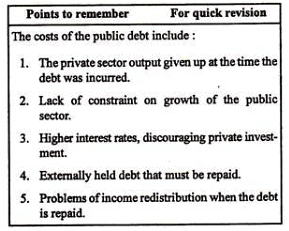 What kind of burden does the national debt impose on taxpayers and on future gene­rations?

The rising burden of the debt service — or interest cost of maintaining the debt — will be passed on to future generations who will have to pay the interest on the current debt. At the same time, however, many of those to whom interest will be paid will be Indian citizens who own government securities.

Should we pay off the debt? First of all, it would be a huge, probably impossible, burden, even over several years, to raise, through taxes and other revenues, the amount needed to pay off the debt. Second, with repayment of the debt, a significant income redistribution would occur as the average taxpayer became poorer due to the increased tax burden and the holders of government securities became richer with their newly redeemed funds.

Also, some portion of the debt is external, or foreign-owned. While, under normal conditions, this is not a serious concern, in a period of accelerated repayment it would mean a sizable outflow of rupees from the India. Finally, in order to pay off the public debt, a series of surplus budgets would be needed.

However, as Keynes pointed out, a surplus budget has a contractionary impact on the economy. While the debt was being paid off, economic activity would decline. In short, the opportunity cost of lowering the national debt would be a slowing down of the economic activities.

The document Public Debt - Public finance Notes | Study Public Finance - B Com is a part of the B Com Course Public Finance.
All you need of B Com at this link: B Com