Definition of a Polynomial

be real numbers and x is a real variable. Then f(x) =

is called a real polynomial of real variable x with coefficients

Degree of a Polynomial

The degree of a polynomial is the highest power of the variable in the polynomial.

Try yourself:What is the degree of a polynomial of 4x7+9x5+5x2+11?
Explanation
View Solution
Examples on Degree of a Polynomial

Ans: The degree of the polynomial is 4.

Ans: The degree of the polynomial is 3. 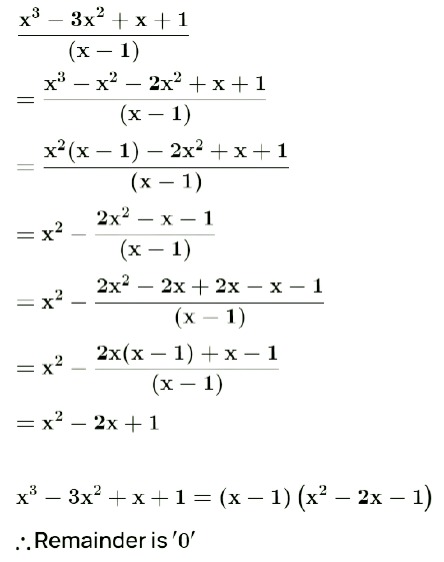 Root or Zero of a Polynomial Equation

Linear Equation with One Variable

A linear equation is 1st degree equation. It has only one root. Its general form is a Quadratic Equation in “x” is one in which the highest power of “x” is 2. The equation is generally satisfied by two values of “x”.

Try yourself:Roots of a quadratic equation are imaginary when discriminant is:
Explanation

Sum and Product of Roots

Formation of Equation from Roots 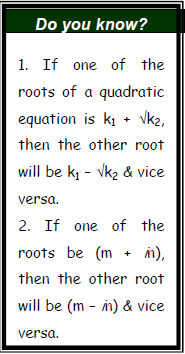 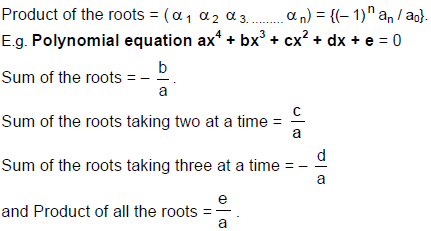 Maximum and Minimum value of a Quadratic Equation

The maximum or minimum value is given by

Ex.3. Find the values of x and y from the equations Ex.5. Aman won a competition and so he got some prize money. He gave Rs. 2000 less than the half of prize money to his son and Rs. 1000 more than the two third of the remaining to his daughter. If both they got same amount, what is the prize money Aman got? 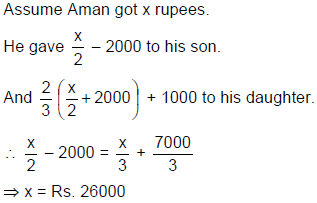