We have studied in detail about the properties of a triangle. We also know that the triangle is a figure obtained by joining three non collinear points in pair. In this chapter we shall discuss about four non-collinear points such that no three of them are collinear.

We know that the figure obtained on joining three non-collinear points in pairs is a triangle. If we mark four points and join them in some order, then there are three possibilities for the figure obtained:
(i) If all the points are collinear (in the same line), we obtain a line segment.

(ii) If three out of four points are collinear, we get a triangle.

(iii) If no three points out of four are collinear, we obtain a closed figure with four sides. 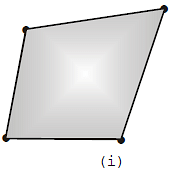 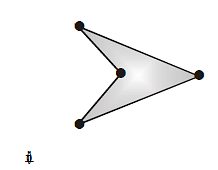 Each of the figure obtained by joining four points in order is called a quadrilateral. (quad means four and lateral for sides).

2. CONSTITUENTS OF A QUADRILATERAL

A quadrilateral has four sides, four angles and four vertices.

We find so many objects around us which are of the shape of a quadrilateral the floor, walls, ceiling, windows of our classroom, the blackboard, each face of the duster, each page of our mathematics book, the top of our study table, etc. Some of these are given below.

4. SOME RELATED TERMS TO QUADRILATERALS
In a quadrilateral ABCD, we have

(i) VERTICES :- The points A, B, C and D are called the vertices of quadrilateral ABCD.

(ii) SIDES :- The line segments AB, BC, CD and DA are called the sides of quadrilateral ABCD.

(iii) DIAGONALS :- The line segments AC and BD are called the diagonals of quadrilateral ABCD.

(vi) CONSECUTIVE ANGLES :- Two angles of a quadrilateral are said to be consecutive angles if they have a common arm. Here, in the above figure, (∠A,∠B), (∠B,∠C), (∠C, ∠D) and (∠D, ∠A) are four pairs of consecutive angles.

(i) PARALLELOGRAM :- A quadrilateral in which Dboth pair of opposite Csides are parallel is called a parallelogram.

(ii) RHOMBUS :- A parallelogram whose all sides are equal is called rhombus.

∴ Parallelogram ABCD is a rectangle. A B

∴ rectangle ABCD is a square. A B

(v) TRAPEZIUM :- A quadrilateral in which exactly one pair of opposite sides is parallel, is called a trapezium. D

A In figure, ABCD is a quadrilateral in which AB ⊥ DC.
∴ ABCD is trapezium.

(vi) ISOSCALES TRAPEZIUM :- A trapezium whose non-parallel sides are equal is called an isosceles trapezium. D

A In figure, ABCD is a trapezium in which AB ⊥ DC and BC = AD .
∴ trapezium ABCD is isosceles trapezium. 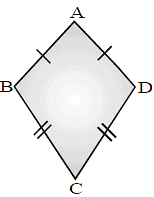 ∴ quadrilateral ABCD is a kite.