The document Quantum Hall Effect Physics Notes | EduRev is a part of the Physics Course Basic Physics for IIT JAM.
All you need of Physics at this link: Physics

IntroductionTake a bunch of electrons, restrict them to move in a two-dimensional plane and turn on a strong magnetic field. This simple set-up provides the setting for some of the most wonderful and surprising results in physics. These phenomena are known collectively as the quantum Hall effect.The name comes from the most experimentally visible of these surprises. The Hall conductivity (which we will defi ne below) takes quantised values

Originally it was found that v is, to extraordinary precision, integer valued. Of course, we're very used to things being quantised at the microscopic, atomic level. But this is something different: it's the quantisation of an emergent, macroscopic property in a dirty system involving many many particles and its explanation requires something new. It turns out that this something new is the role that topology can play in quantum many-body systems. Indeed, ideas of topology and geometry will be a constant theme throughout these lectures.
Subsequently, it was found that v is not only restricted to take integer values, but can also take very specifi c rational values. The most prominent fractions experimentally are v = 1/3 and v = 2/5 but there are many dozens of different fractions that have been seen. This needs yet another ingredient. This time, it is the interactions between electrons which result in a highly correlated quantum state that is now recognised as a new state of matter. It is here that the most remarkable things happen. The charged particles that roam around these systems carry a fraction of the charge of the electron, as if the electron has split itself into several pieces. Yet this occurs despite the fact that the electron is (and remains!) an indivisible constituent of matter.
In fact, it is not just the charge of the electron that fractionalises: this happens to the "statistics" of the electron as well. Recall that the electron is a fermion, which means that the distribution of many electrons is governed by the Fermi-Dirac distribution function. When the electron splits, so too does its fermionic nature. The individual constituents are no longer fermions, but neither are they bosons. Instead they are new entities known as anyons which, in the simplest cases, lie somewhere between bosons and fermions. In more complicated examples even this description breaks down: the resulting objects are called non-Abelian anyons and provide physical embodiment of the kind of non-local entanglement famous in quantum mechanics.
Because of this kind of striking behaviour, the quantum Hall effect has been a constant source of new ideas, providing hints of where to look for interesting and novel phenomena, most of them related to the ways in which the mathematics of topology impinges on quantum physics. Important examples include the subject of topological insulators, topological order and topological quantum computing. All of them have their genesis in the quantum Hall effect.
Underlying all of these phenomena is an impressive theoretical edifice, which involves a tour through some of the most beautiful and important developments in theoretical and mathematical physics over the past decades. The first attack on the problem focussed on the microscopic details of the electron wavefunctions. Subsequent approaches looked at the system from a more coarse-grained, field-theoretic perspective where a subtle construction known as Chern-Simons theory plays the key role. Yet another perspective comes from the edge of the sample where certain excitations live that know more about what's happening inside than you might think. The main purpose of these lectures is to describe these different approaches and the intricate and surprising links between them.

Quantum Hall Effects
Now we understand the classical expectation. And, of course, this expectation is borne out whenever we can trust classical mechanics. But the world is governed by quantum mechanics. This becomes important at low temperatures and strong magnetic fields where more interesting things can happen.
It’s useful to distinguish between two different quantum Hall effects which are associated to two related phenomena. These are called the integer and fractional quantum Hall effects. Both were first discovered experimentally and only subsequently understood theoretically. Here we summarise the basic facts about these effects. The goal of these lectures is to understand in more detail what’s going on.

Integer Quantum Hall Effect
The first experiments exploring the quantum regime of the Hall effect were performed in 1980 by von Klitzing, using samples prepared by Dorda and Pepper1. The resistivities look like this: 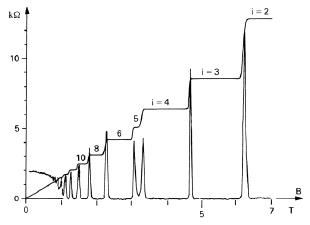 (1.9)
The value of v is measured to be an integer to an extraordinary accuracy — something like one part in 109. The quantity 2πh/e2 is called the quantum of resistivity (with —e, the electron charge). It is now used as the standard for measuring of resistivity. Moreover, the integer quantum Hall effect is now used as the basis for measuring the ratio of fundamental constants 2πh/e2 sometimes referred to as the von Klitzing constant. This means that, by definition, the v =1 state in (1.9) is exactly integer!
The centre of each of these plateaux occurs when the magnetic field takes the value

where n is the electron density and

is known as the flux quantum. As we will review in Section 2, these are the values of the magnetic field at which the first v ∈ Z Landau levels are filled. In fact, as we will see, it is very easy to argue that the Hall resistivity should take value  when v Landau levels are filled. The surprise is that the plateau exists, with the quantisation persisting over a range of magnetic fields.
There is a clue in the experimental data about the origin of the plateaux. Experimental systems are typically dirty, filled with impurities. The technical name for this is disorder. Usually one wants to remove this dirt to get at the underlying physics. Yet, in the quantum Hall effect, as you increase the amount of disorder (within reason) the plateaux become more prominent, not less. In fact, in the absence of disorder, the plateaux are expected to vanish completely. That sounds odd: how can the presence of dirt give rise to something as exact and pure as an integer? This is something we will explain in Section 2.
The longitudinal resistivity pxx also exhibits a surprise. When pxy sits on a plateau, the longitudinal resistivity vanishes: pxx = 0. It spikes only when pxy jumps to the next plateau.
Usually we would think of a system with pxx = 0 as a perfect conductor. But there's something a little counter-intuitive about vanishing resistivity in the presence of a magnetic field. To see this, we can return to the simple definition which, in components, reads

If pxy = 0 then we get the familiar relation between conductivity and resistivity:

1/pxx. But if pxy ≠ 0, then we have the more interesting relation above. In particular, we see

a perfect insulator! What’s going on?
This particular surprise has more to do with the words we use to describe the phenomena than the underlying physics. In particular, it has nothing to do with quantum mechanics: this behaviour occurs in the Drude model in the limit

to where there is no scattering. In this situation, the current is flowing perpendicular to the applied electric field, so E . J = 0. But recall that E . J has the interpretation as the work done in accelerating charges. The fact that this vanishes means that we have a steady current flowing without doing any work and, correspondingly, without any dissipation. The fact that

Fractional Quantum Hall Effect
As the disorder is decreased, the integer Hall plateaux become less prominent. But other plateaux emerge at fractional values. This was discovered in 1982 by Tsui and Stormer using samples prepared by Gossard2. The resistivities look like this: 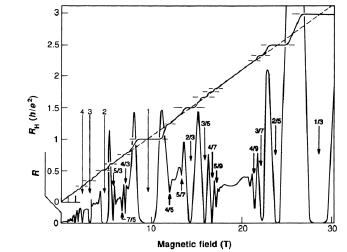 This is the fractional quantum Hall effect. On the plateaux, the Hall resistivity again takes the simple form, but now with v a rational number
v ∈ Q
Not all fractions appear. The most prominent plateaux sit at v = 1/3,1/5 (not shown above) and 2/5 but there are many more. The vast majority of these have denominators which are odd. But there are exceptions: in particular a clear plateaux has been observed at v = 5/2. As the disorder is decreased, more and more plateaux emerge. It seems plausible that in the limit of a perfectly clean sample, we would get an infinite number of plateaux which brings us back to the classical picture of a straight line for
pxy!
The integer quantum Hall effect can be understood using free electrons. In contrast, to explain the fractional quantum Hall effect we need to take interactions between electrons into account. This makes the problem much harder and much richer. The basics of the theory were first laid down by Laughlin3, but the subject has since expanded in a myriad of different directions. The 1998 Nobel prize was awarded to Tsui, Stormer and Laughlin. Sections 3 onwards will be devoted to aspects of the fractional quantum Hall effect.