The Bose–Einstein statistics apply only to those particles not limited to single occupancy of the same state—that is, particles that do not obey the Pauli exclusion restrictions.

Such particles have integer values of spin and are named boson , after the statistics that

The wave function of particle will overlap to each other because mean separation of particles is less than the thermal wavelength, which is identified by λ.

is defined as the thermal wavelength )

Suppose there are l states with energies, E1,E2,E3,...El and degeneracy g1,g2,g3...gl. Respectively, in which the particles are distributed. If there is N numbers of indistinguishable boson particles out of these n1,n2,n3.....nl particles is adjusted in energy level E1,E2,E3,...El respectively.

The total no. of arrangements of the particles in the given distributions is given by

If ni and gi are large numbers, we can omit 1 in comparison to them,

The Bose Einstein distribution of the particle among various states ni =

is negative, but for photon gas is zero.

Example 11: Two indistinguishable boson particles have to be adjusted in a state whose degeneracy is three.

(a) How many ways the particles can be adjusted?

(b) Show all arrangement.

(b) Total number of arrangement for 2 indistinguishable boson particles in state whose degeneracy is 3. 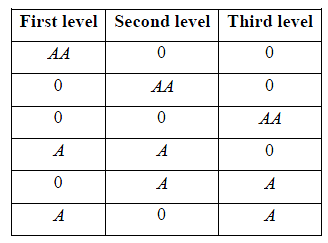 Examples 12: (a) Write down distribution function of photon at temperature T , if average energy in each state is given by ε= hv.

(c) Write down expression of no of particle for photon gas at temperature T .

(d) Write down expression of average energy for photon gas at temperature T.

(a) The Bose Einstein distribution is given by f(E) =

(b) If j is quantum number associate with frequency v then total no of frequency between v to v + dv is same as the number of points between j to j + dj . The volume of spherical shell of radius j and thickness dj is 4πj2dj

Hence all three component of j is positive (same as particle in box) and there are two direction of polarization so degeneracy g = 2 .

So number of standing wave g(j)dj =

The integral have value, N =

Example 13: A system consisting of two boson particles each of which can be any one of three quantum state of respective energies o, ,3 is in equilibrium at temperature T. write the expression of partition function. 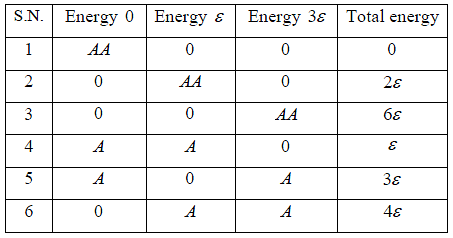 Fermi–Dirac (F–D) statistics applies to identical particles with half odd integer spin in a system in thermal equilibrium. Additionally, the particles in this system are assumed to have negligible mutual interaction. This allows the many-particle system to be described

in terms of single-particle energy states. The result is the F-D distribution of particles over these states and includes the condition that no two particles can occupy the same state, which has a considerable effect on the properties of the system. Since F-D statistics applies to particles with half-integer spin, these particles have come to be called fermions. It is most commonly applied to electrons, which are fermions with spin 1/2.

No. of ways W in which ni indistinguishable particles to place in level with the

condition that only one particle or no particle can be placed in gi each level i.e. identical

particles that obey the Pauli exclusion principle. (It is given

The Fermi-Dirac energy distribution is, f(E)=

strongly degenerate (A= 0) at T = 0 , where μ = μ(0) = EF . The limiting chemical potential is known as the Fermi energy EF of the gas and the distribution function can be 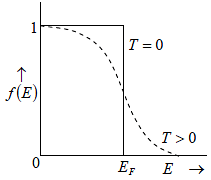 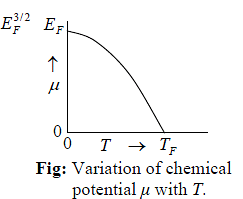 Thus, the Fermi energy is

and the Fermi temperature TF is defined as TF =

The Fermi momentum pF is given by pF =

Example 14: What is no. of ways if two fermions have to adjust in energy state whose degeneracy is three.

Two indistinguishable particles is shown by A, A

Example 15: Fermions of mass m are kept in two dimensional box of area A at temperature T = 0

(a) What is total number of particle if is Fermi energy EF.

(b) What is the energy of the system if is Fermi energy EF.

(c) Write expression of energy in term of EF and N

And distribution function at temperature T = 0 , is given by

At E = EF + x , find the fraction of occupied levels is

(c) The fraction of unoccupied levels at the energy E is

At E = EF - x , find the fraction of occupied levels is