The document Quantum Numbers And Its Related Principles - Atomic Structure Chemistry Notes | EduRev is a part of the Chemistry Course Physical Chemistry.
All you need of Chemistry at this link: Chemistry

To understand the concept of Quantum Numbers, we must known the meaning of some terms clearly so as to avoid any confusion.

To describe or to characterize the electrons around the nucleus in an atom, a set of four numbers is used, called as Quantum Numbers. These are specified such that the states available to the electrons should follow the laws of quantum mechanism or wave mechanics.

Higher is the value of n, greater is its distance from the nucleus, greater is its size and also greater is its energy. It also gives the total electrons that may be accommodated in each shell, the capacity of each shell is given by the formula 2n2, where n: principal quantum number.

It can assume all integral values from 0 to n –1. The possible values of l are:

Each value of l describes a particular sub-shell in the main energy level and determines the shape of the electron cloud.

The orbital Angular momentum of electron =

These three orbitals are represented as px, py, pz along X, Y, Z axes perpendicular to each other.

Aufbau is a German word meaning ‘building up’. This gives us a sequence in which various sub-shells are filled up depending on the relative order of the energy of the subs-hells. The sub-shell with minimum energy is filled up first and when this obtains maximum quota of electrons, then the next sub-shell of higher energy starts filling. Exceptions of Aufbau Principle:  In some cases it is seen that actual electronic arrangement is slightly different from arrangement given by Aufbau principle. A simple reason behind this is that half-filled and full-filled sub-shell have got extra stability.

Similarly the following elements have slightly different configurations than expected. 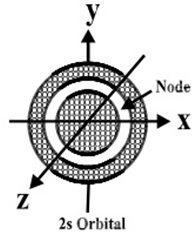 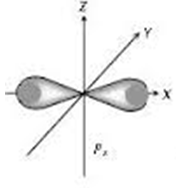 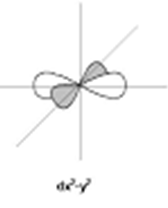 In case of light some phenomenon like diffraction and interference can be explained on the basis of its wave character. However, the certain other phenomenon such as black body radiation and photoelectric effect can be explained only on the basis of its particles nature. Thus, light is said to have a dual character. Such studies on light were made by Einstein in 1905.

Louis de-Broglie, in 1942 extended the ideal of photons to material particles such as electron and he proposed that matter also has a dual character-as wave and as particle.

Derivation of de-Broglie equation: The wavelength of the wave associated with any material particle was calculated by analogy with photon, if it is assumed to have wave character, its energy is given by

If the photon is supposed to have particle character, its energy is given by

Where ‘m’ is the mass of photon, ‘c’ is the velocity of light.

Where mv = p is the momentum of the particle.

All moving objects that we see around us e.g., a car, a ball thrown in the air etc, move along definite paths. Hence their position and velocity can be measured accurately at any instant of time. Is it possible for subatomic particle also:

As a consequence of dual nature of matter. Heisenberg, in 1927 gave a principle about the uncertainties in simultaneous measurement of position and momentum (mass × velocity) of small particles. This principle states.

It is impossible to measure simultaneously the position and momentum of a small microscopic moving particle with absolute accuracy or certainty i.e., if an attempt is made to measure any one of these two quantities with higher accuracy, the other becomes less accurate.

Thus, the mathematical expression for the Heisenberg’s uncertainty principle is simply written as

Explanation of Heisenberg’s uncertainty Principle: Suppose we attempt to measure both the position and momentum of an electron, to pin point the position of the electron we have to use light so that the photon of light strikes the electron and the reflected photon is seen in the microscope. As a result of the hitting. The position as well as the velocity of the electron  is distributed. The accuracy with which the position of the particle can be measured depends upon the wavelength of the light used. The uncertainty in position is +l. The shorter the wavelength, the greater is the accuracy. But shorter wavelength means higher frequency and hence higher energy. This high energy photon on striking the electron changes its speed as well as direction. But this is not true for macroscopic moving particle. Hence Heisenberg’s uncertainty principle is not applicable to macroscopic particles.

Pauli’s Exclusion Principle: According to this principle

By doing this, the electrons stay as far away from each other as possible. This is highly reasonable if we consider the electron-electron repulsion. Hence electron obey Hund’s rule as it results in lower energy state and hence more stability.

Node is defined as a region where the probability of finding an electron is zero.

The planes passing through the angular nodal points are called nodal planes.