QUARTILE DEVIATION Quartiles are such values which divide the total number of observations into 4 equal parts. Obviously, there are 3 quartiles—(i) First quartile (or Lower quartile): Q1(ii) Second quartile, (or Middle quartile) : Q2(iii) Third quartile (or Upper quartile): Q3 The number of observations smaller than Q1 , is the same as the number lying between Q1 and Q2, or between Q2 and Q3, or larger than Q3. For data of continuous type, one-quarter of the observations is smaller than Q1, two-quarters are smaller than Q2 , and three-quarters are smaller than Q3. This means that Q1, Q2, Q3 are values of the variable corresponding to ‘less-than’ cumulative frequencies N/4, 2N/4, 3N/ 4 respectively. Since, 2N/4 = N/2, it is evident that the second quartile Q2 is the same as median.

Quartile Deviation (Q.D.) is dependent on the two quartiles and does not take into account the variability of the largest 25% or the smallest 25% of observations. It is therefore unaffected by extreme values. Since in most cases the central 50% of observation tend to be fairly typical, Q.D. affords a convenient measure of dispersion. It can be calculated from frequency distributions with open-end classes. Q.D. is thus superior to Range in many ways. Its unpopularity lies in the fact that Q.D. does not depend on the magnitudes of all observations. The calculation of Q.D. only depends on that of the two quartiles, Q1 and Q3 which can be found from a cumulative frequency distribution using simple interpolation.

Example and Solution.
Example 1. Calculate the quartile deviation from the following: 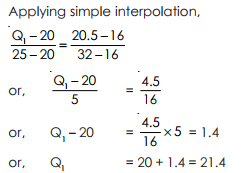 Example 2. Calculate the appropriate measure of dispersion from the following data :

Next, we can now compute the MAD:

= 30/6= 5%Interpretation: It means that on average, an individual return deviates 5% from the mean return of 12%Example 5. Working with data from example 2 above, the variance will be calculated as follows:Solution.

Thus, the average variation from the mean (0.12) is 0.003767.The standard deviation is 0.0037671/2 = 0.06137 or 6.14%Analysts use the standard deviation to interpret returns as opposed to the variance since it is much easier to comprehend.Example 6. Assume that the returns realized in example 2 above were sampled from a population comprising 100 returns. Compute the sample mean and the corresponding sample variance.Solution. The sample mean will still be 12%Hence,