The document Question Paper 2016 (Set 1) Commerce Notes | EduRev is a part of Commerce category.
All you need of Commerce at this link: Commerce

Q.1. Which accounts are not considered while preparing the trial balance?Q.2. Name the process of transferring entries from a journal to their respective accounts in the ledger.Q.3. Why are rules of debit and credit same for liability and capital?Q.4. Which document evidenced that the credit has been granted to the named person for the reason stated therein?Q.5. Briefly discuss the informational needs of any three external users.Q.6. On December 31, 2013, the cash book of XYZ Bros showed an overdraft of Rs 69,200, from the following particulars make out a bank reconciliation statement and ascertain the balance as per pass book(i) Debited by bank for Rs 2,000 on account of interest on overdraft and Rs 500 on account of charges for collecting bills.(ii) Cheques drawn but not cashed before December 31, 2013 for Rs 40,000.(iii) The bank has collected interest and has credited Rs 6,000 in pass book.(iv) A bill receivable for Rs 7,000 previously discounted with the bank had been dishonoured and debited in the pass book.(v) Cheques paid into bank but not collected and credited before December 31, 2013 amounted to Rs 60,000.Q.7. Double entry system of accounting is based on the principle of 'dual aspect'. Explain.Q.8. Qualitative characteristics are the attributes of accounting information which tend to enhance its understandability and usefulness. In the light of this statement, briefly explain any three such characteristics.Q.9. Create an accounting equation on the basis of the following transactions and show the resulting balance sheet. 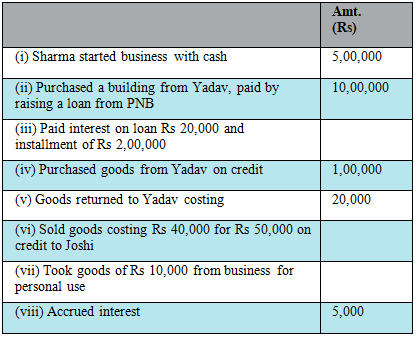 Q.10. Rectify the following errors by passing journal entries, using a suspense account.(i) The purchase of Rs 400 from X was entered into sales book but X's personal account was rightly credited.(ii) The sale of Rs 430 to Y was credited in his account as Rs 340(iii) The sale of old furniture of Rs 540 was credited to sales account as Rs 450(iv) Goods worth Rs 100 were taken by the proprietor which was not recorded(v) The sales of Rs 296 to P was entered in sales books as Rs 269(vi) Sales return books balance of Rs 210 was not included in the accounts

Q.11. Journalise the following transactions:(i) Harish started business with cash Rs 1,00,000 and a building valued at Rs 5,00,000.(ii) An old machine with the book value of Rs 80,000 is exchanged for a new machine of Rs 2,40,000. The old machine is valued at Rs 50,000 for exchange purposes by Machine Tools Ltd.(iii) A cheque from a customer amounted to Rs 5,000 deposited in the bank was returned dishonoured.(iv) Paid landlord Rs 1,500 for rent. One third of the premises is occupied by the proprietor for his own residence.(iv) Goods costing Rs 500 given as charity (Sales price Rs 600). Q.13. (i) Why should a business follow the consistency principle?(ii) Explain materiality concept.

Q.14. A draws on B three bills of exchange for Rs 50,000, Rs 40,000 and Rs 30,000 respectively for goods sold to him on 1st February, 2013. These bills were for one month, two month and three month respectively. The first bill was endorsed to his creditor C. The second bill was discounted with his bank on 4th February, 2013 @ 12% per annum discount and the third bill was sent to his bank for collection on 30th April. On the due dates all the bills were duly met by B. The bank sent the collection advice for the third bill after deducting Rs 250 as collection charges. Pass the journal entries in the books of A and B.

Financial Accounting – II Q.16. An idea about the cash position of non-profit organisation can be known through which account?

Q.17. Rajesh went to an internet cafe and used one PC for some work but instantly she saw that the previous person's email-id who worked on the same computer was opened. She didn't saw it and logged it out. Which value is being observed by Mona by doing so?

Q.18. Software is the instruction that makes a computer work. In context to this discuss any three types of software.

Q.19. (i) From the following figure calculate the operating profit

(ii) State whether the cost of obtaining license to carry out business is a capital or revenue expenditure.

Q.21. Briefly explain any six factors which should be taken into account before sourcing an accounting software.

Q.22. Extracts of receipts and payments account for the year ended 31st March, 2013 are given below

Receipt and Payments Account
For the year ended 31st March, 2013

Calculate the amount of subscriptions to be shown on the income side of income and expenditure account and show the relevant data in the balance sheet on 31st March, 2012 and 2013. You are required to prepare an income and expenditure account for the year ending 31st December, 2013 and balance sheet as on that date after making the following adjustments
(i) Membership subscription included Rs 10,000 received in advance.
(ii) Provide for outstanding rent Rs 4,000 and salaries Rs 3,000
(iii) Books to be depreciated @ 10% including additions. Electrical fittings and furniture are also to be depreciated at the same rate.
(iv) 75% of the entrance fees is to be capita used.
(v) Interest on securities is to be calculated @ 5% per annum including purchases of investment made on 1st July, 2013 for Rs 40,000.

The balance sheet of Sports club on 1st April, 2014 and the receipts and payments account for the year ended 31st March, 2015 are:

Receipt and Payment Account
For the year ended 31st March, 2015

Additional Information:
(i) On 30th September, 2014 the old furniture was donated to the Ramjash society and new furniture was purchased on 1st October, 2014, depreciation @ 10% per annum is to be provided on the furniture.(ii) On 31st March, 2015 the creditors for stationery were Rs 4,800 and the value of the unused stationery was Rs 5,400.(iii) A payment of Rs 5,000 for stationery by the club was to be debited to the general expenses.
You are required to prepare the income and expenditure account for the year ended 31st March, 2015 and the balance sheet as at that date.

Q.24. From the books of Mr. Yadav the following trial balance has been prepared on 31st March, 2013 Prepare the trading and profit and loss account for the year ended 31st March, 2013 and the balance sheet as at that date, taking into consideration the adjustment given below:
(i) On 1st October, 2012 plant worth Rs 1,00,000 was purchased on credit but no entry has been passed.(ii) Outstanding expenses: rent Rs 5,000; salary Rs 6,000(iii) Prepared expenses: insurance Rs 2,500; wages Rs 4,000(iv) Goods worth Rs 27,500 were taken for personal use by the owner but no entry has been made.(v) Write off depreciation on plant and furniture @ 10% per annum.(vi) Write off Rs 5,000 from debtors as bad debts and create provision for doubtful debts @ 5% and 2% provision for discount on debtors.

From the following trial balance, prepare the trading and profit and loss account for the year ended 31st March, 2015 and the balance sheet as at that date.