Question 1. Make three points in your notebook and name them.

Solution :  Three points, namely A,P and H can be marked as follows

Question 2. Draw a line in your notebook and name it using a small letter of the alphabet

Solution :  Let us draw a line and name it l

Question 3. Draw a line in your notebook and name it by using two points on it

Solution :  Let us first draw a line. Two points on it are P and Q. now, the line can be written as line PQ 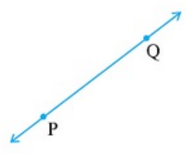 Question 4. Give three examples from your environment of:

i) The period at the end of the sentence, a pinhole on the map and the point at which two walls and the floor meet at the corner of the room.

Question 5. There are a number of ways by which we can visualize a portion of a line. State whether the following represent a portion of line or not:

i) A piece of elastic stretched to the breaking point

iii) The line thread by which a spider lowers itselfAnswer:i) Yesii) Noiii) YesQuestion 6. Can you draw a line on the surface of a sphere which lies wholly on it?

Solution :  No, we cannot draw a line on the surface of the sphere, which lies wholly on it.

Questions 7. Make appoint on the sheet of a paper and draw a line passing through it. How many lines can you draw through this point?

Solution :  Unlimited number of lines can be drawn passing through a point L 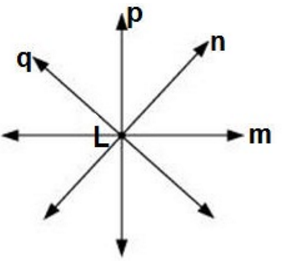 Question 8. Mark any two points P and Q in your notebook and draw a line passing through the points.

How many lines can you draw passing through this both points?

Solution :  We have two points P and Q and we draw a line passing through these two points.

Only one line can be drawn passing through these two points.

Question 9. Give an example of the horizontal plane and a vertical plane from your environment.

Solution :  Ceiling of a room is an example of a horizontal plane in our environment.

Wall of a room is an example of a vertical plane in our environment. 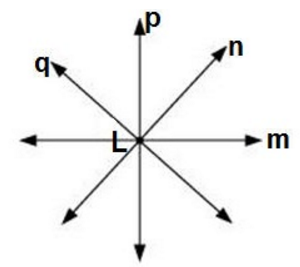 Lines passing through two points – one

Lines passing through any three collinear points – one 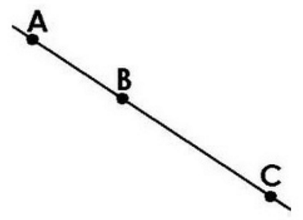 Question 11. Is it ever possible for exactly one line to pass through three points?

Solution :  Yes, it is possible if three points lie on a straight line 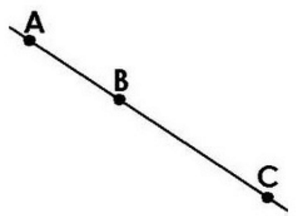 Question 12. Explain why is not possible for a line to have a mid point?

Solution :  The length of the line is infinite. Thus, it is not possible to find its midpoint. On the other hand, we can find, we can find the midpoint of a line segment

Question 13. Mark three non – collinear points points A,B,C in your notebook . Draw the lines through the points taking two at a time. Name these lines. How many such different lines can be drawn ?

Three lines can be drawn through these points. These three lines are AB, BC and AC 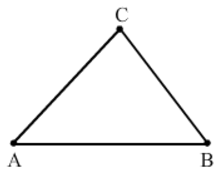 Question 14. Coplanar points points are the points that are in the same plane. Thus,

A group of points that lie in the same plane are called co planar points.

Thus, it is possible that 150 points can be co-planar.

3 points will be coplanar because we can have a plane that can contain 3 points on it.

Thus, it is not possible that 3 points will be non – coplanar.

Question 15. Using a ruler, check whether the following points given in the figure are collinear or not?

i) D,A and C are collinear points

Question 16. Lines p, q is coplanar. So are the lines p, r. Can we conclude that the lines p, q, r are coplanar?

Solution :  No, p,q and r are not necessarily coplanar.

Example – if we take p as intersecting line of two consecutive walls of a room , q as a line on the first wall and r on the second wall whose (both walls) intersection is line p

Thus we can see that p,q and r are not coplanar.

Question 17. Give three examples of each: 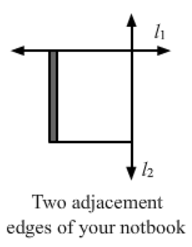 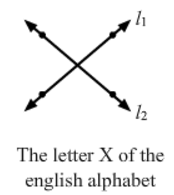 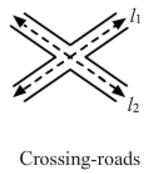 i) Parallel lines from your environment:Answer: 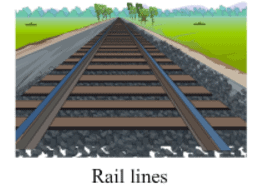 Question 18. From the figure write: 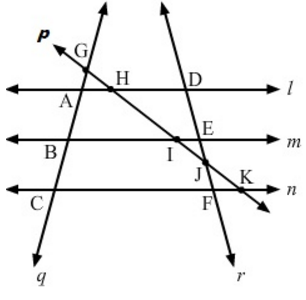 iv) Lines whose point of intersection is DAnswer: (l,r)

Question 19. Write concurrent lines and their and their point of concurrence: 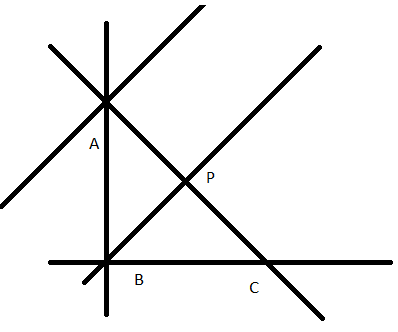 From the given figure, we have :

Concurrent lines can be defined as three or more lines which share the same meeting point. Clearly lines, n,q, and l are concurrent with A as the point of concurrence .

Lines, m,q and p are concurrent with B as the point of concurrence.

Question 20. Mark four points A,B,C,D in your notebook such that no three of them are collinear . Draw all the lines which join them in pairs as shown 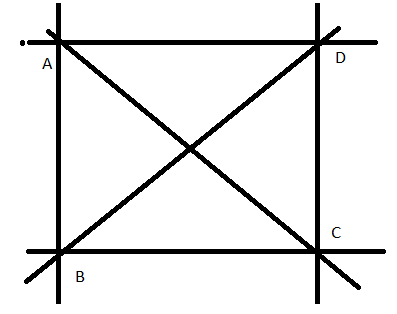 i) How many such lines can be drawn

Answer: Six lines can be drawn through these four points as given in the figure.

ii) Write the names of these linesAnswer: These lines are AB, BC, CD, BD and AD

iii) Name the lines which are concurrent to A

Answer: Lines which are concurrent at A are AC, AB and AD

Solution :  Maximum number of points of intersection of three lines in a plane will be three 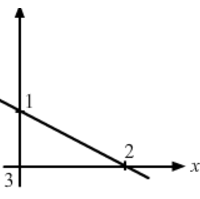 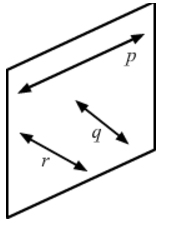 Question 22. With the help of a figure, find the maximum and minimum number of points of intersection of four lines in a plane.

Solution :  Maximum number of points of intersection of four lines in a plane will be six 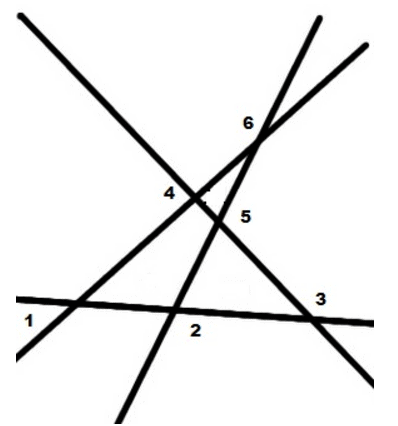 Minimum number of points of intersection of four lines in a plane will be zero. 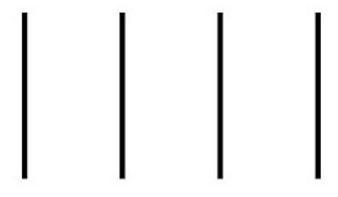 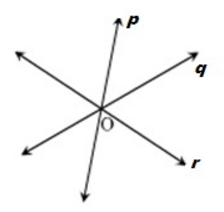 Therefore, lines p, r, and s intersect at a common point. But q and r intersect each other at O.

So, p,q and r intersect at O 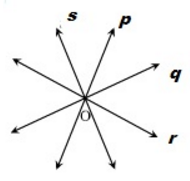 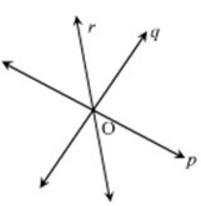 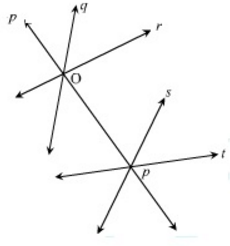 Question 25. Fill in the blanks in the following statements using suitable words:

i) A page of a book is a physical example of aAnswer: plane

Answer: parallel or are intersecting

Question 26. State which of the following statements are true and which are false:

ii) By lines in geometry , we mean only straight lines – True

iv) Any plane through a vertical line is vertical – True

ix) If two lines intersect at a point P , then P is called the point of concurrence of the two lines – False

x) If two lines intersect at a point P , then P is called the point of intersection of the two lines- True

Question 27. Give the correct matching of the statements of column A and column B 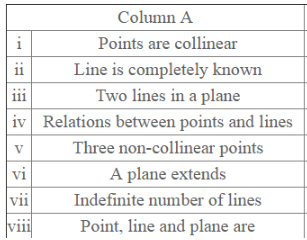 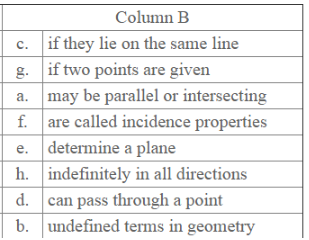