Q.1 Name any four objects from your environment, which have the form of

(ii) A disc, a chalk box,a cubical cabin, and a tissue box.

Q.2 Draw a diagram to represent a cuboid. Label its vertices as P, Q, R, S, T, U, V and W. Now write the names of its faces and edges.

Sol.2 : The diagram of a cuboid is shown below : 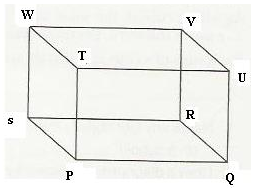 Now write the names of its faces and edges. 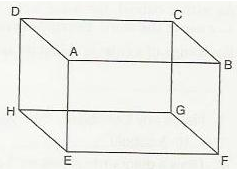 Q.4 Figure represents a cuboid. The lengths of the edges AE, EF and FG are indicated as l, b and h respec. Indicated the lengths of all other edges.

Q5. In figure, if the face EFGH is taken as the base, the name the lateral faces. Also, name the line segment represent the height of the cuboid. (fig. from book)

Sol.5 : Following are the lateral faces for the base EFGH.

AE or DH or BF or CG are the line segments representing the height of the cuboid.

Q.6 In fig. name the four diagonals of the cuboid. (fig. from book)

(i) face parallel to BFGC

(iii) three edges which meet in the vertex G.

(ii) The faces adjacent to BFGC are BCDA, DCGH, ABFE, and EFGH.

Q.8 Fill in the blanks to make the following statements true :

(ii) A cube has twelve vertices.

(i) What is the base of this cuboid?

(ii) What are the lateral faces of this cuboid?

(iv)Name all the faces of this cuboid which have X as a vertex. Also, name those which have VW as a side.

(iii) Any one pair of opposite faces among the lateral faces of the base are PQVU and SXWR or UXSP and QVWR.

There are two pairs of opposite faces among the lateral faces of the base of the cuboid.

(iv) The faces, which have one of the vertex as X, are UVWX, UXSP and SXWR.

The faces, which have VW as side, are QVWR and UVWX.

Faces which meet at vertex P are PQRS, UPSX,and PQVU.

(iv) Which faces have a diagonal equal to 5 cm?

(v)What is the area of the base of this cuboid?

(vi) Do all the lateral faces have the same area?

(ii) The faces having dimensions of 5 cm x 4 cm would have an area of 20 cm2. And such faces are ABCD and EFGH.

Therefore, the faces ADHE and BCGF have the diagonal of 5 cm.