The document RRB NTPC Admit Card 2019 -Important Updates Notes - Railways is a part of Railways category.
All you need of Railways at this link: Railways

The RRB NTPC Admit Card 2019 will be released soon. The same once released will be available on the official website.

This would mean that the process would begin in January, following which the admit card would be released by February 2020. Once the date is announced the RRB NTPC Admit Card 2019 will be released.

Analysts say that the manner in which the entire processes that the RRB is undertaking one could be in for a surprise as well. The board had not given any date for the RRB JE CBT 2 result 2019. However much to the surprise of the candidates, the same was released last week. The same could happen in the case of the RRB NTPC exam 2019 date as well.

Looking at the progress made, there is a chance that the exam process could be delayed further. A tentative date would either be in January or February 2020.

Candidates feel that the board must keep them updated about the ongoing process.

This is a very important process for us and we want to ensure that everything goes on smoothly. The sheer number of candidates who have applied shows how big the process is. We want everything to go on properly and do not want any confusion, a Board official informed OneIndia.

The RRB received a total of 1,26,30,885 applications to fill up 35,208 vacancies. A large number of applications is what led to the delay in the release of the admit card and exam dates.

"It was indicated in the employment notice that the 1st stage computer based test (CBT) is tentatively scheduled between June and September 2019. However, it has been postponed. The revised schedule will be published in the official websites of all RRBs later on," the notice from the Railway Recruitment Board said.

The RRB NTPC exam is a computer-based exam which will be conducted for a total of 100 marks. It will be divided into 3 sections General awareness, General reasoning and mathematics. The examination duration will be for 90 minutes. 1/3rd mark will be reduced for the wrong answers.

As per the official notification, released by the Government of India, Ministry of Railways, the computer-based test (first stage) that was tentatively scheduled between June and September 2019 has been postponed. The revised schedule will be published in the official website of all RRB later on and candidates 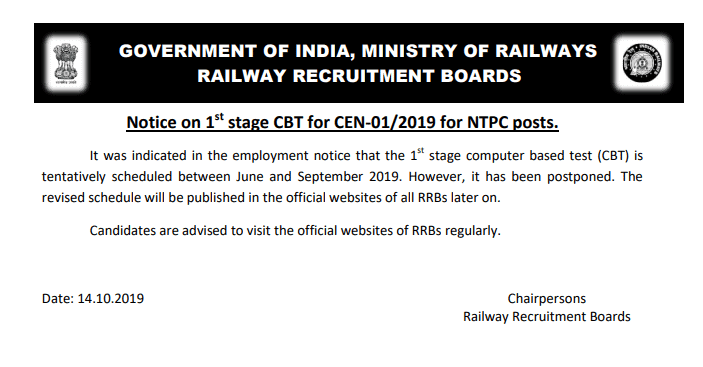