In near field approximation, this led to expression that was familiar to us in magnetostatics excepting for the time dependent multiplicative factor

leading to our describing the situation as “quasi-stationary”. We will not have much to say about the intermediate zone as this case is very complicated. However, the far field approximation or the radiation zone for which the distance of the point of observation from the source is much greater than both the typical source dimension and the wavelength of radiation is of great interest to us and will be described in the following.

for situations where r<<x'.In a similar way, we have, keeping terms of the order of 1/r3 in Binomial expansion

Using the above, we can write, retaining terms upto

The lowest order approximation is to ignore the second term within bracket of the above. This gives

The integral above is rewritten by observing,

and the fact that the time dependence is given by

We replace each component of

in the expression for vector potential by

The integration over the first term is done by first converting it to a surface integral using the divergence theorem and letting the surface go toinfinity. Since the source dimension is confined to a limited region of space, this integral is zero and we are then left with,

is the electric dipole moment of the source. Hence, we can write,

We can now obtain the expressions for the magnetic field and the electric field from the vector potential. Using the fact that

is a constant vector, we can write,

Thus the magnetic field direction is transverse to the direction of

We will see, however, that the electric field has a longitudinal component as well.

The first and the last terms of above are zero because

is a constant vector. We are left with

Substituting these, the electric field becomes

We reorganize the terms in the following fashion. Keep the first term within the first parenthesis in tact. For the second and the third terms, expand the vector triple product

the electric field goes as

In the radiation zone, we are only interested in large distance behaviour. In this regime, the field expressions are,

and the corresponding electric field is given by

How does the emitted power, i.e., the average value of Poynting vector vary? 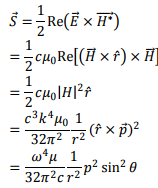 The amount of power flowing per unit solid anglein the direction of (θ, Ø) is given by

and the total radiated power is obtained by integrating over  (θ, Ø). Since there is no azimuthal dependence, the integration over Ø gives 2π and we get,

The following figure shows the “power pattern” in dipole approximation. It can be seen that the two lobes are symmetric about the dipole. The distance from the dipole to the lobe at any point gives the relative power in that direction with respect to the maximum. The total radiated power varies as the fourth power of the frequency.

We had started our discussion on radiation zone with the following expression for the vector potential,

In the dipole approximation, we only retained the first term within the square bracket and ignored the remaining. Our next approximation is concerned with the second term. We will not write down the dipole term so that what we are discussing below is the correction to the dipole radiation. We consider

Using the argument given before, as the ettent of the source is limited, by extending the surface integral to infinite distances, we have, from the divergence theorem,

If we write this by expanding the divergence term, we have,

where, in the last step, we have used the equation of continuity. Inserting this into i-th component of the integral,

As mentioned before, the integral over the divergence is zero and we are left with

is the Levi-Civita symbol which is + 1 if i,j,k is an even permutation of 1,2 and 3, is −1 if it is an odd permutation and is zero if any pair of symols are equal. Using

where the magnetic moment vector

where we have restored the structure

for the central term of the second expression retaining the expanded form for the remaining.

In the radiation zone, the first term, which varies as 1/r at large distances dominate and we have,

The corresponding electric field can be determined from Faraday’s law,

where we have retained only the leading term in radiation zone approximation.

The power radiated can be calculated in the same manner as we did for the electric dipole case,

[The above formulae were for two specific cases of radiating systems, viz. oscillating electric dipole and oscillating magnetic dipole. The power radiated from an arbitrary current and charge distribution is given by the formula

where the double dots indicate double differentiation with time. For the specific cases mentioned above, these boil down to respective formulae on taking the time average.

1. Spherical symmetry implies that both the electric and the magnetic field remains radial at all times. Using Gauss’s law, this implies

hence there is no radiation.

2. Since the distance from the source is large, it is reasonable to assume that the observer is in the radiation zone. In this region we use

where we have used the fact that the observer is located along the x-axis .

(b) As discussed in the last lecture, the wave generated at time t arrives at

at the observer’s location. Thus the phase difference between the wave at the source and that at the location of

(c) Since the observer is in the equatorial plane θ= 90∘ . The power measured at this location is

(d) Along the axis of dipole θ= 0∘ so that no power is radiated in this direction.

(e) The total power radiated is given by

3. Take the dipole along the x-y plane with its axis being along the z-axis. Consider the position vector of the of observer to be in the x-z plane,

The magnetic moment vector is given by

where A is the area of the loop. The complex magnetic field is given by

The electric field is given by

The average Poynting vector is given by

The power flowing out per unit solid angle is given by

and other constants, we get the total power radiated to be 0.253 W.

1. Two point charges, q each, are attached to the ends of a rigid rod of length ℓ. The rod is rotated with an angular speed ω about an axis through the centre of the rod and perpendicular to it. Calculate the electric and the magnetic dipole moment of the system taking the centre of the rod as the origin. What is the total power radiated by this system?

2. An electric dipole of strength ρ0 initially lies along the x-axis centred at origin. The dipole rotates in the x-y plane about the z-axis at an angular frequency ω. Calculate the radiation field and the radiated power as seen by an observer in the x-z plane at an angle θ to the z-axis.

which is equivalent to a current 4 πqω. The area of the current loop is

Thus the magnetic moment is given by

Both the electric and the magnetic dipoles are constant in time and hence there is no radiation emitted by the system.

2. The dipole vector can be written as

Since the observer is in x-z plane, y-direction is perpendicular to the direction of observation

Using these, we can write the complex magnetic field as

The corresponding electric field is given by

The average Poynting vector is given by

The power flowing out per unit solid angle is given by

The total power radiated is given by integrating the above over the solid angle. Since there is no azimuthal dependence, we have,

3. The magnetic field of a dipole at

is given by the expression

At the equator, θ= 90∘ so that the strength of the magnetic field is

Substituting the given values, the magnitude of the magnetic field is

The magnetic moment vector as

Substituting numerical values, one gets the power radiated to be 1.2 × 1029 W.