Q.6. A radioactive material decays by simultaneous emission of two particles with respective half-lives 1620 and 810 year. Find the time, in year, after which one-fourth of the material remains.

∵ N/N0 = e-λtThere is a simultaneous emission of two particles

Q.9. In the mixture of isotopes normally found on the earth at the present time,

has an abundance of 0.7%. The measured lifetimes of these isotopes are 6.52 x 109 years and 1.02 x 109 years, respectively. Assuming that they were equally abundant when the earth was formed, the estimate age of the earth, in years.

Q.10.  A radioactive nucleus X decays to a nucleus Y with a decay constant λX = 0.1s-1. Y further decays to a stable nucleus Z with a decay constant λY = (1/30)s-1 Initially there are only X s nuclei and their number is N0 = 1020.Set, up the rate equations for the populations of X , Y and. Z. The Populations of Y nucleus as a function ‘of time is given by

Find the time at which NY is maximum and determine the populations of X and Z at that instant. 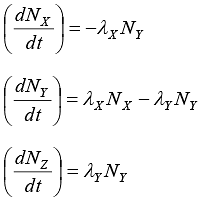 (ii) Time t at which NY is maximum:

The document Radioactive Decay: Assignment Notes | Study Modern Physics - Physics is a part of the Physics Course Modern Physics.
All you need of Physics at this link: Physics
Join Course