Memory is the most essential element of a computing system because without it computer can’t perform simple tasks. Computer memory is of two basic types – Primary memory(RAM and ROM) and Secondary memory (hard drive, CD, etc). Random Access Memory (RAM) is primary-volatile memory and Read Only Memory (ROM) is primary-non-volatile memory.

Difference Between DRAM and SRAM 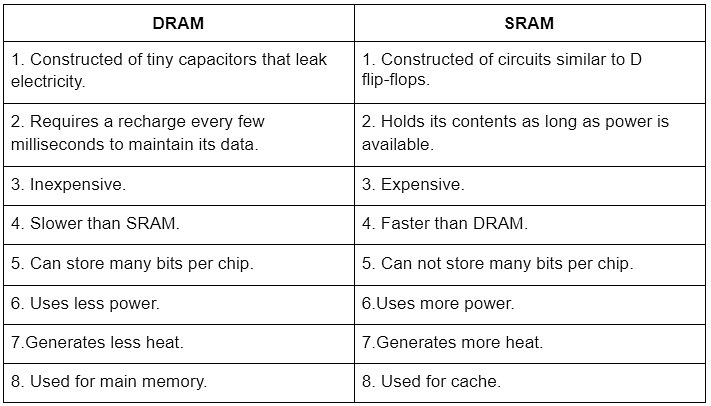 Types of Read Only Memory (ROM)

Difference Between RAM and ROM

RAM(Random Access Memory) is a part of computer’s Main Memory which is directly accessible by CPU. RAM is used to Read and Write data into it which is accessed by CPU randomly. RAM is volatile in nature, it means if the power goes off, the stored information is lost. RAM is used to store the data that is currently processed by the CPU. Most of the programs and data that are modifiable are stored in RAM.

The block diagram of RAM chip is given below.

The SRAM memories consist of circuits capable of retaining the stored information as long as the power is applied. That means this type of memory requires constant power. SRAM memories are used to build Cache Memory.SRAM Memory Cell: Static memories(SRAM) are memories that consist of circuits capable of retaining their state as long as power is on. Thus this type of memories is called volatile memories. The below figure shows a cell diagram of SRAM. A latch is formed by two inverters connected as shown in the figure. Two transistors T1 and T2 are used for connecting the latch with two bit lines. The purpose of these transistors is to act as switches that can be opened or closed under the control of the word line, which is controlled by the address decoder. When the word line is at 0-level, the transistors are turned off and the latch remains its information. For example, the cell is at state 1 if the logic value at point A is 1 and at point B is 0. This state is retained as long as the word line is not activated. 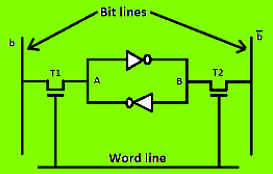 For Read operation, the word line is activated by the address input to the address decoder. The activated word line closes both the transistors (switches) T1 and T2. Then the bit values at points A and B can transmit to their respective bit lines. The sense/write circuit at the end of the bit lines sends the output to the processor.

For Write operation, the address provided to the decoder activates the word line to close both the switches. Then the bit value that to be written into the cell is provided through the sense/write circuit and the signals in bit lines are then stored in the cell.

DRAM stores the binary information in the form of electric charges that applied to capacitors. The stored information on the capacitors tend to lose over a period of time and thus the capacitors must be periodically recharged to retain their usage. The main memory is generally made up of DRAM chips.DRAM Memory Cell: Though SRAM is very fast, but it is expensive because of its every cell requires several transistors. Relatively less expensive RAM is DRAM, due to the use of one transistor and one capacitor in each cell, as shown in the below figure., where C is the capacitor and T is the transistor. Information is stored in a DRAM cell in the form of a charge on a capacitor and this charge needs to be periodically recharged. 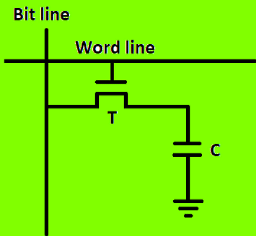