The document Random Variables:Discrete and Continuous - Mathematical Methods of Physics, UGC - NET Physics Physics Notes | EduRev is a part of the Physics Course Physics for IIT JAM, UGC - NET, CSIR NET.
All you need of Physics at this link: Physics

A random variable, usually written X, is a variable whose possible values are numerical outcomes of a random phenomenon. There are two types of random variables, discrete and continuous.

Suppose a random variable X may take k different values, with the probability that X = xi defined to be P(X = xi) = pi. The probabilities pi must satisfy the following: 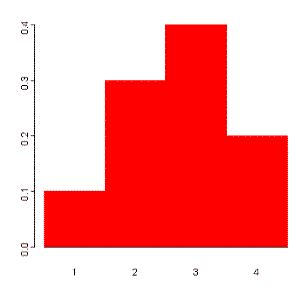 Suppose a variable X can take the values 1, 2, 3, or 4. The probabilities associated with each outcome are described by the following table:

This distribution may also be described by the probability histogram shown to the right: 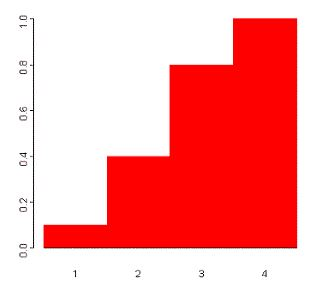 The probability histogram for the cumulative distribution of this random variable is shown to the right:

A continuous random variable is not defined at specific values. Instead, it is defined over an interval of values, and is represented by the area under a curve (in advanced mathematics, this is known as an integral). The probability of observing any single value is equal to 0, since the number of values which may be assumed by the random variable is infinite.

Suppose a random variable X may take all values over an interval of real numbers. Then the probability that X is in the set of outcomes A, P(A), is defined to be the area above A and under a curve. The curve, which represents a function p(x), must satisfy the following:

2: The total area under the curve is equal to 1.

A curve meeting these requirements is known as a density curve.

A random number generator acting over an interval of numbers (a,b) has a continuous distribution. Since any interval of numbers of equal width has an equal probability of being observed, the curve describing the distribution is a rectangle, with constant height across the interval and 0 height elsewhere. Since the area under the curve must be equal to 1, the length of the interval determines the height of the curve.

The following graphs plot the density curves for random number generators over the intervals (4,5) (top left), (2,6) (top right), (5,5.5) (lower left), and (3,5) (lower right). The distributions corresponding to these curves are known as uniform distributions.

The uniform distribution is often used to simulate data. Suppose you would like to simulate data for 10 rolls of a regular 6-sided die. Using the MINITAB "RAND" command with the "UNIF" subcommand generates 10 numbers in the interval (0,6):

Another type of continuous density curve is the normal distribution. The area under the curve is not easy to calculate for a normal random variable X with mean μ and standard deviation σ. However, tables (and computer functions) are available for the standard random variable Z, which is computed from X by subtracting μ and dividing by σ. All of the rules of probability apply to the normal distribution.