Ratio and Proportion are explained majorly based on fractions. When a fraction is represented in the form of a:b, then it is a ratio whereas a proportion states that two ratios are equal.

What is a Ratio?

The ratio is the comparison between similar types of quantities, it is an abstract quantity and does not have any units.

1. A ratio remains the same if both antecedent and consequent are multiplied or divided by the same non-zero number,

2. Two ratios in their fraction notation can be compared just as we compare real numbers.

4. Key Points to Remember about Ratio:

Try yourself:In a mixture of 60 litres, the ratio of milk and water 2 : 1. If this ratio is to be 1 : 2, then the quantity of water to be further added is:
Explanation

Let the quality of water to be added further be x litres.

∴ Quantity of water to be added = 60 litres

What is a Proportion?

The equality of two ratios is called proportion i.e. If a/b = c/d, then a, b, c, d are said to be in proportion. 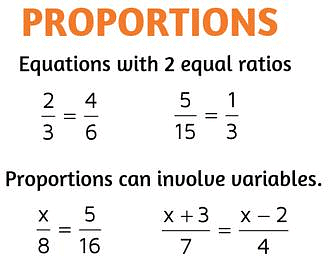 Example 1: Let us consider one more example of a number of students in a classroom. Our first ratio of the number of girls to boys is 3:5 and that of the other is 4:8, then the proportion can be written as:

Try yourself:Two numbers are respectively 20% and 50% more than a third number. The ratio of the two numbers is:
Explanation

Let the third number be x.

Difference Between Ratio and Proportion

The LCM process gets very cumbersome when we have to find the ratio out of multiple ratios.We have the following simple method for that for a chain of ratios of any length.

Suppose you have the ratio train as follows

If we were to find A : B : C : D : E, then the LCM method would have taken quite a long time which is infeasible in examinations of limited hours.

The short cut is as follows: 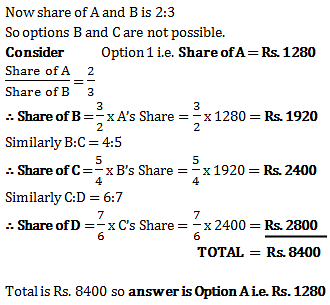 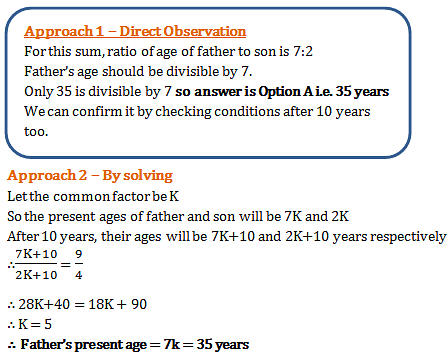 Q.4. Ajay and Raj together have Rs. 1050. On taking Rs. 150 from Ajay, Ajay will have same amount as what Raj had earlier. Find the ratio of amounts with Ajay and Raj initially. 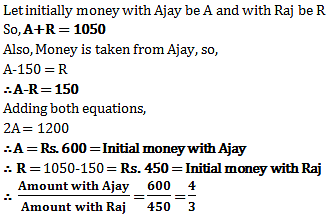