The document Rational and Irrational Numbers - Number Systems, Class 9, Mathematics | EduRev Notes is a part of Class 9 category.
All you need of Class 9 at this link: Class 9

Rational numbers:– These are real numbers which can be expressed in the form of

, where p and q are integers and 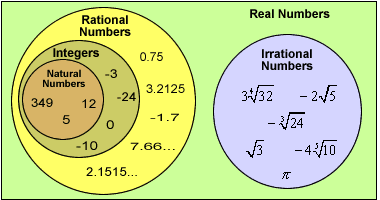 , where p & q are integers and

is a rational number lying between x and y.

(B) 2nd method : Find n rational number between x and y (when x and y is non fraction number)then we use formula.

(C) 3rd method : Find n rational number between x and y (when x and y is fraction Number) then we use formula,

Ex. Find 3 rational numbers between 2 and 5.

Hence, three rational numbers between 2 and 5 are :

in the decimal form by long division method.

(ii) Non terminating & Repeating (Recurring decimal) :–A decimal in which a digit or a set of finite number of digits repeats periodically is called Non-terminating repeating (recurring) decimals.

Ex. Find the decimal representation of

Sol. By long division, we have Now, divide OA into two equal parts. Let OP be the first part out of these two parts.Then, the point P represents the rational number 1/2.

Again, divide OA' into two equal parts. Let OP' be the first part out of these 2 parts. Then the point P' represents the rational number -1/2.