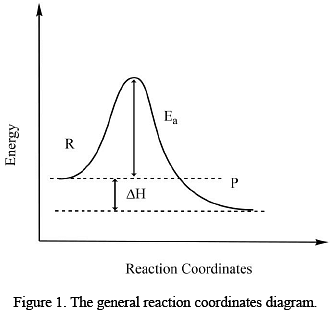 Labile and Inert Complexes on the Basis of Valence Bond Theory

According to the valence bond theory of chemical bonding, octahedral metal-complexes can be divided into two types.

Labile and Inert Complexes on the Basis of Crystal Field Theory

Octahedral complexes react either by SN1 or SN2 mechanism in which the intermediates are five and seven-coordinated species, respectively. In both cases, the symmetry of the complex is lowered down and due to this change in crystal field symmetry, the crystal field stabilization (CFSE) value also changes. The cases for lability and inertness are:

1. All six-coordinated complexes should be treated as perfect octahedral even if the mixed ligands are present.2. The inter-electronic repulsive forces arising from d-subshell can simply be neglected.3. The Dq-magnitude for reacting as well as the intermediate complexes are assumed to be the same though they might have considerably different values.4. The Jahn-Teller distortion should also be neglected in all calculations.

➤ Evidence for the lability and inertness: The ligand displacement can be dissociative or associative depending upon the nature of the reaction.  (i) For SN1 or dissociative pathway, the 5-coordinate intermediate can be trigonal-bipyramidal or squarepyramidal. However, it has been observed that the dissociative mechanism occurs through a square-pyramidal intermediate. Hence, the gain or loss of the crystal field stabilization energy can be calculated as:CFSE gain or losss = CFSE of Squarepyramidal Intermediate – CFSE of Octahedral ReactantIf the CFSE gain-or-loss is negative, it means that activation energy is zero because it cannot be negative. 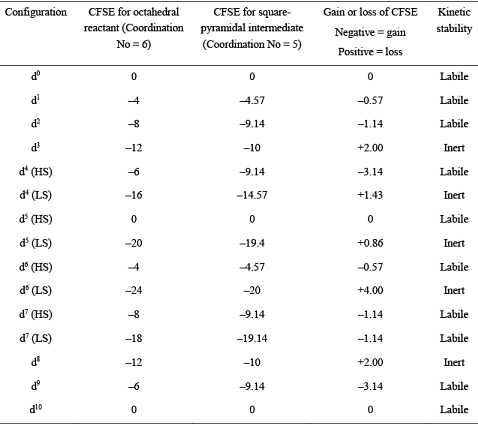 From Table 1, we can say that:Metal complexes with d0, d1, d2, d10 are labile in nature and undergo fast ligand displacement through the dissociative pathway. High spin metal complexes with d4, d5, d6, d7 are also labile in nature and react quickly through the dissociative pathway. Low spin complexes of d7 metal ions are also found to be labile due to CFSE gain.On the other side, d3 and d8 metal complexes are inert in nature and undergo slow ligand displacement through the dissociative pathway. Moreover, low spin complexes with d4, d5 and d6 metal complexes are also inert due to loss of CFSE during the SN1 mechanism. Using the order of CFSE loss, the reactivity can be represented as d5 > d4 > d8 > d3 > d6.(i) For SN2 or associative pathway, the 7-coordinate intermediate can be a pentagonal-bipyramidal or octahedral wedge. However, it has been observed that the associative mechanism preferably occurs through an octahedral-wedge intermediate. Hence, the gain or loss of the CFSE can be calculated as:CFSE gain or loss = CFSE of Octahedral-Wedge Intermediate – CFSE of Octahedral Reactant 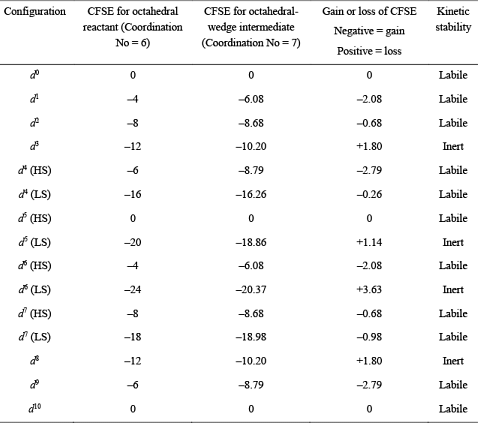 The following conclusions can be drawn from the data listed in Table 2.

Now although the lability of transition metal complexes mainly depends upon the gain or loss of CFSE during the formation intermediate (what we have already discussed in this section previously), the geometry also plays some role in the same. In other words, in addition to the lability of non-transition metal complexes, ‘Figure 4’ may also be used to explain some lability profiles in transition metal complexes. For instance, the rate of exchange of CN− by 14CN− in [Ni(CN)6]2− is greater than what is observed for [Mn(CN)6]3− and [Co(CN)6]3− complexes. This can be attributed to the easy formation of an activated complex with the incoming ligand, which in turn, facilitates the removal of the previously attached ligand.

The ligand displacement in metal complexes is said to have been taken place if one of the previously attached ligands got replaced by another ligand from its coordination sphere. The scheme can be shown as:MAnL + E → MAnE + L ...(2)Where ligand L is the leaving group present in the complex, E is the entering ligand which is nucleophilic in nature. The coordination number of the complex remains the same.

...(8)The intermediate state is trigonal-bipyramidal and undergoes rapid Berry-pseudo-rotation followed by the elimination of the leaving group. 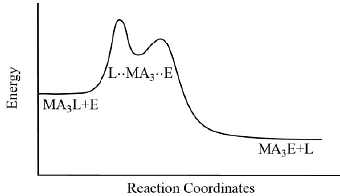 A more in-depth visualization of ligand displacement reactions in square-planar complexes is given below in which the involvement of Berry-pseudorotation is depicted more precisely.

Figure 12. Involvement of Berry-pseudorotation in the ligand displacement in square-planar complexes.

Formation of Complexes from Aquo Ions

The complex formation from the aquo ions yields the assembly containing metal ions with only water as ligands. These complexes are the major components in aqueous solutions of many metal salts, like metal sulphates, perchlorates and nitrates. The formula for metal-aquo complexes [M(H2O)n]z+ where the value of z generally varies from +2 to +4. The metal-aquo complexes play some very important roles in biological, industrial and environmental aspects of chemistry. Now though the homoleptic aquo complexes (only with H2O as the ligands attached) are very common, there are many other complexes that are known to have a mix of aquo and other ligand types. 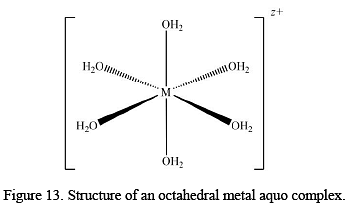 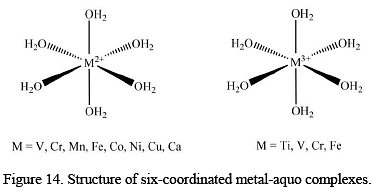 The metal-aquo complexes that exist with coordination numbers lower than six are very uncommon but not absent from the domain. For instance, Pd2+ and Pt2+ form [M(H2O)4]2+ complexes with the squareplanar stoichiometry; and a rare tetrahedral aquo complex [Ag(H2O)4]+ is also known. Some of the most studied hexa-coordinated complexes are given below.

The metal-aquo complexes of the trivalent lanthanides are eight- and nine-coordinated, which is obviously due to the large size of the metal ions. In past, the coordination number of Ln3+ ions in their aquo complexes was somewhat more or less controversial; however, nowadays, advanced characterization techniques like O17 NMR or density functional studies number of coordinated water molecules decreases from nine to eight with the decrease of the ionic radius i.e La3+ to Lu3+. Some of the most studied eight and ninecoordinated complexes are given below. 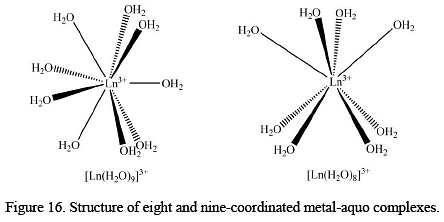 There are some metal-aquo complexes which do possess metal-metal bonds. Two of the most studied examples are [Mo2(H2O)8]4+ and [Rh2(H2O)10]4+ which have eclipsed and staggered conformations, respectively. It should also be noted that metal-metal in [Mo2(H2O)8]4+ is of quadruple nature (four bond order).

The main reactions shown by metal-aquo complexes are the electron-transfer, ligand exchange, and acid-base reactions of the O-H bonds. A general discussion on all three is given below.

The general scheme for the ligand displacement reactions in octahedral complexes can be shown as:MA5L + E → MA5E + L ...(12)Where ligand L is the leaving group present in the complex, E is the entering ligand which is nucleophilic in nature. The coordination number of the complex remains the same. Moreover, if the entering group E is H2O or OH– in aqueous solution, the study of ligand displacement become more important due to extremely wide application domain. Some of the most prominent reactions in ligand substitution in six-coordinated complexes are discussed in detail.

The point group symmetry for the above system D3. There are also geometrical isomers when the bidentate ligands are unsymmetrical in nature like glycinato. The total number isomer, in that case, is four as:

The interconversion or the racemization of tris chelate complexes in case symmetrical ligands can take place via with or without the rupturing of the metal-ligand bond.

There is a special class of ligand substitution reactions in which ligand displacement occurs without the breaking of metal-ligand bonds. Experimental studies suggested that these reactions take place via an electrophilic attack on the ligand already attached to the metal center. Consider the preparation of [Co(NH3)5(H2O)]3+ complex from [(NH3)5–Co–CO3]+ cationic species:

It has been observed that the no isotopically labeled oxygen is found in the aquo complex which indicates that no metal-ligand bond-breaking has actually been taken place during the course of the whole substitution process.

Mechanism: The whole process can be summed up into the following steps(1) Electrophilic or the proton attack on the oxygen atom of the ligand bonded to the trivalent cobalt.(2) Expulsion of CO2 and H2O to form hydroxo complex.(3) Protonation of the hydroxo complex. 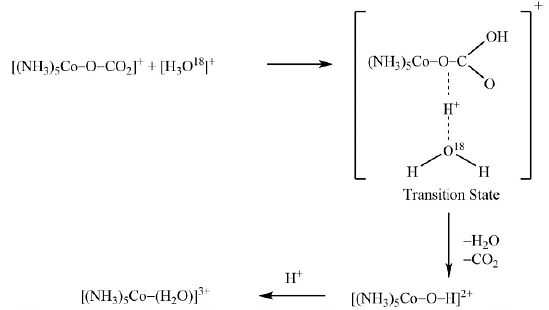 It is also worthy to mention that the reaction described above is a decarboxylation rather than the acid hydrolysis.The similar behavior can be observed in the reaction of NO2− group with pentaammineaquocobalt(III) ion. When the studies involving isotopic labelling were carried out, we came to know that show that the oxygen of bound water is actually the same to what is used by NO2− to bind with metal centre. This unusual result can be explained by the following mechanism. 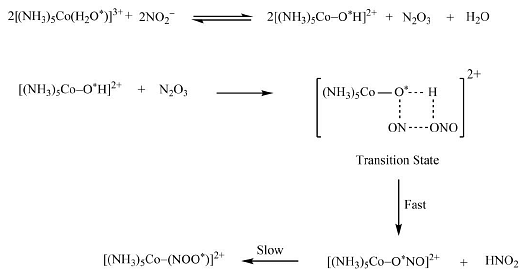 Hence, in both of the reactions given above, the displacement of previously attached ligand octahedral complexes occurs without metal-ligand bond breaking.

Q 1. How does the ligand field affect the choice between SN1 and SN2 paths in the substitution reactions of octahedral complexes? Also, explain how is this choice influenced by the basicity and π bonding capacity of a non-reacting ligand?

Q 2. Discuss the mechanism of acid hydrolysis taking the example of the octahedral complex of Co(III).

Q.3 What do you understand by SN1CB? Explain with example.

Q 5. What is base hydrolysis? Discuss the possible mechanisms.

Q 6. How does the racemization of tris chelate complexes take place?

Q 8. What are metal-aquo complexes? Also, draw and discuss the structure of eight and nine coordinated aquo complexes of trivalent lanthanide ions.

Q 9. Give a brief discussion on important reactions of metal-aquo complexes.