Andrews’ experiment investigated the behaviour of CO2 and analyse the Pressure (P) versus volume(V) at different temperature T .

The observations are following:

From A to B , CO2 behaves as a gas. At point B, the liquification of the gas just starts. The gas condenses at constant pressure from B to , so that liquid and vapour phase co-exist. At C, the gas is completely in the liquid phase. From C to D, the slope is very steep since a liquid is almost incompressible.

A gas can be liquified only if it is cooled upto or below its characteristic critical temperature.

There exist a continuity of liquid and gaseous states, i.e. they are two distinct stages of a

The van der Waals equation for real gases are given by,

And for n mole of gas,

is popularly known as co-volume, which is dependent on the nature of gas.

Example 1: If Vm is molecular volume of real gas, then prove that m b = 4NVm , if N is total number of molecule in container. 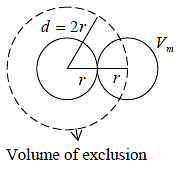 The volume available to second molecule = V - Vs

Where, Vs is volume of exclusion i.e. around any molecule, a spherical volume is Vs =

will be denied to every other molecule.

Volume of exclusion,  Vs =

Hence, the average volume available to each molecule is,

A molecule in the interior of the gas is on average attracted equally in all direction, so

that there is no resultant force on it. But for outermost layer closes to the surface of

container, there will be net inward force. So whenever a molecule strikes the walls of

container, the momentum exchange will be less than that for an Ideal gas.

There forces are cohesive in nature and proportional to number of molecules. So, for real

gas change in pressure is a/V2 . So for real gas pressure will be

So, the gas equation reduces to

James Clerk Maxwell replaced the isotherm between a and c with a horizontal line positioned so that the areas of the two hatched regions are equal (means area of adb and bec are equal). The flat line portion of the isotherm now corresponds to liquid vapor equilibrium. As shown in figure. 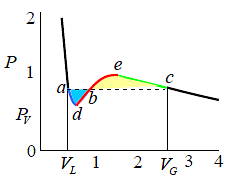 The portions a - d and c - e are interpreted as metastable states of super-heated liquid and super-cooled vapor respectively. The equal area rule can be expressed as:

Example 2: One mole of a certain gas is contained in a vessel of volume V . At a temperature T1 the gas pressure is p1 atm and at a temperature T2 the pressure p2 is atm.  Find the van der Waals parameters for this gas.

It is given that the number of mole n =1

Example 3: Under what pressure will carbon dioxide of molar mass M have the density ρ at the temperature T , if given gas is obeying van der Waals gas equation.

Assume M is molar mass of the carbon dioxide and V is the volume.

where P,V and T represent the pressure, volume and temperature respectively, a and b are constant parameters. At the critical point, all the roots of the above cubic equation are degenerate means all roots are equal.

Mathematically, the critical isotherm is the point of inflection.

On the basis of above definition, one can find the critical volume Vc , critical pressure Pc and critical temperature Tc for van der waal gas.

On putting the value of Vc and Tc, one can get Pc =

= cc which is popularly known as critical coefficient for van der Waals gas.

According to virial theorem the equation of state is given by

Where α ,β and γ are first, second and third virial coefficient.

For the Ideal gas, α =  RT and other coefficients are zero.

Using binomial theorem, we have

As it will be noted, van der Waals equation has only three virial coefficients and on comparison with equation (i) yields,

At the Boyle’s temperature, the second virial coefficient is zero.

From the preceding, section we recall that the critical temperature of a gas obeying van

der Waals equation of state is

on comparing these expressions, we get

i.e., the Boyle’s temperature, on the basis of van der Waals equation, is 3.375 times the