INTRODUCTION
"God gave us the natural number, all else is the work of man". It was exclaimed by L. Kronecker (1823-1891), the reputed German Mathematician. This statement reveals in a nut shell the significant role of the universe of numbers played in the evolution of human thought.

N : The set of natural numbers,

W : The set of whole numbers,

Z : The set of Integers,

Q : The set of rationals,

R : The set of Real Numbers 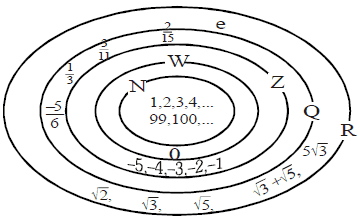 Dedekind was the first modern mathematician to publish in 1872 the mathematically rigorous definition of irrational numbers. He gave explanation of their place in the real Numbers System. He was able to demonstrate the completeness of the real number line. He filled in the 'holes' in the system of Rational numbers with irrational Numbers. This innovation has made Richard Dedekind an immortal figure in the history of Mathematics.

Srinivasa Ramanujan (1887-1920) was one of the most outstanding mathematician that India has produced. He worked on history of Numbers and discovered wonderul properties of numbers. He stated intuitively many complicated result in mathematics. Once a great mathematician Prof. Hardy come to India to see Ramanujan. Prof. Hardy remarked that he has travelled in a taxi with a rather dull number viz. 1729. Ramanujan jumped up and said, Oh! No. 1729 is very interesting number. It is the smallest number which can be expressed as the sum of two cubes in two different ways.
viz 1729 = 13 + 123,
1729 = 93 + 103,
⇒ 1729 = 13 + 123 = 93 + 103

In our day to day life, we deal with different types of numbers which can be broadly classified as follows.