The document Realistic Representation Of Stereo Structures Of Molecules - Stereochemistry Chemistry Notes | EduRev is a part of the IIT JAM Course Organic Chemistry.
All you need of IIT JAM at this link: IIT JAM

The sawhorse formula indicates the spatial arrangement of all the groups on two adjacent carbon atoms is represented by a diagonal line usually from lower left to upper right. The Fischer projection, devised by Emil Fischer in 1891, is a two-dimensional representation of a three-dimensional organic molecule by projection.

In order to find out whether the two structures are identical or not, these projections can be manipulated only in specific ways. The following rules must be obeyed.

1. For comparison, a fischer projection may be rotated 180° in the plane of the paper & molecule remains same.

2. One interchange in the fischer projection leads to the enantiomers. Configuration at the

stereocenter changes from (S) to (R) and vice-versa.

3. Two or any even number of interchanges of the groups at the chiral centre, don’t changes the configuration.

4. A 900 rotation of the fischer projection formula about the chiral centre inverts the configuration.

5. It is not permitted lift projection formulae out of the plane of the paper and flip them over or view them from the opposite side of the paper. These operations, if done, are the same as breaking a bond to change the configuration of the original molecule.

6. Fischer projection can be manipulated by rotating a group of any three ligands in a clockwise or anticlockwise direction; the fourth ligand doesn’t change its position (Such a manipulation is equivalent to two interchanges).

The Flying-Wedge Projection is the most widely used three-dimensional representation of a molecule on a two-dimensional surface (paper). 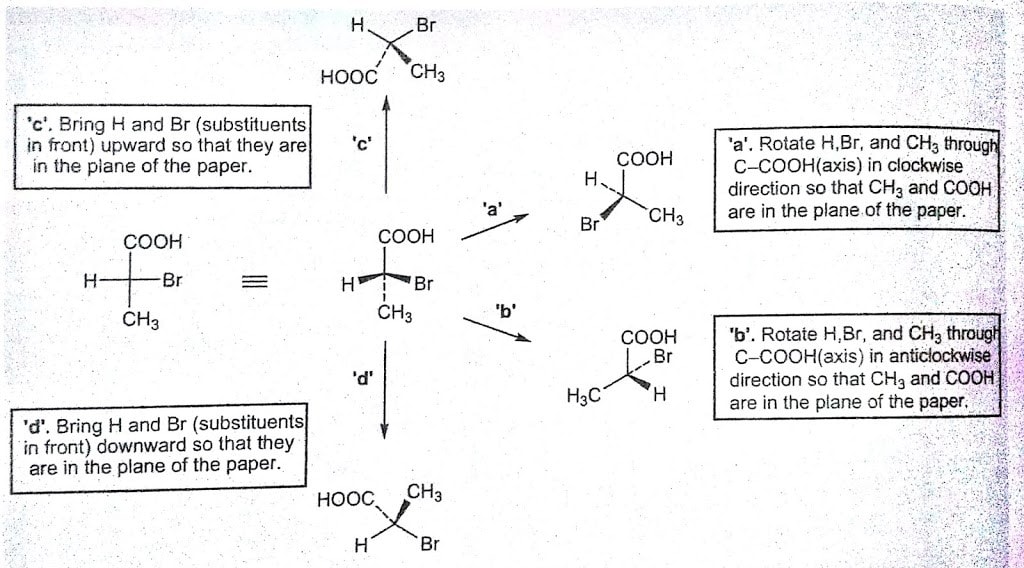 Conversion of Fischer Projection into Sawhorse and Newman Formula