Reconciliation of Cost and Financial AccountsNeed For ReconciliationThe two systems of accounting viz. financial and cost accounts co-exist in the same organisation and they deal with same basic transactions say, purchases, consumption of materials, wages and other expenses. But the difference of purpose calls for a difference in approach in collection, analysis and presentation of data to meet the objective of individual system. Financial accounts are concerned with the ascertainment of profit or loss for the whole operation of the organisation for a relatively long period usually a year, without being too much concerned with cost computation, whereas cost accounts are provided for ascertaining the profit or loss made by manufacturing or product divisions/products for cost comparison and preparation and use of variety of cost statements. The difference in purpose and approach more often than not results in a different profit from what is disclosed by the financial accounts and this establishes the need for a reconciliation of profit between cost accounts and financial accounts.Thus, reconciliation between the results of the two sets of books is necessary due to the following reasons:

Causes of DifferencesThe vital differences between the two branches of accounting are manifested in the variation of the profit figure of one from the other through the cumulative impact of the following factors:

I. Items Shown Only In Financial AccountsThere are certain items which are included in financial accounts but find no place in cost accounts. These may be items of expenditure or appropriation of profit or items of income. The items may be classified as under:(a) Purely Financial Charges:

II. Items Included In Cost Accounts OnlyThere are certain items which are excluded from financial accounts but are included in cost accounts:

IV. Adoption of Different Basis of Valuation of Stock

Thus the method of valuation of stock gives rise to different results in the sets of books.

V. Different Methods of Charging DepreciationThe methods of charging depreciation may be different in cost books as well as in financial books. The method of providing depreciation under financial accounting is totally governed by Companies Act or tax provisions so that diminishing balance method or fixed instalment method is generally followed. However in cost accounts machine hour rate or production hour or unit method may have been followed.

VI. Abnormal Gains and LossesAbnormal gains or losses may completely be excluded from cost accounts or may be taken to costing profit and loss account. If it is excluded, costing profit/loss will differ from financial profit/loss and adjustment will be required. In case, if these are transferred to costing profit and loss account, the profit or loss shown by cost accounts will agree with the profit or loss of financial accounts. In such a case no adjustment will be required. Examples of such abnormal gains and losses are, abnormal wastage of materials, e.g. by theft, fire etc., cost of abnormal idle time, cost of abnormal idle facilities, exceptional bad debts, abnormal gain in manufacturing through processes etc.

I. Ascertain the various reasons of disagreement (as discussed above) between the profits disclosed by two sets of books of accounts.II. If profit as per cost accounts (or loss as per financial accounts) is taken as the base.

2. What is the object of Reconciling cost and Financial accounts?Answer:To know the reasons for the difference. know the situation of under absorption and over absorption of overhead. To check the mathematical mistake.

4. Why the cost accounts and financial accounts show a different profit?Answer: The difference between costing profit & financial profit is on account of their difference in the object of preparing account.

7. State any two items which are included in cost accounts but not in financial accounts?Answer: Two items in cost books only are national rent of self-occupied house and national interest on own capital.

8. Give the causes of difference between costing profit and financial profits?Answer: Reasons for difference in profit are:

9. How is stock of finished goods valued in financial accounts and ost accounts?Answer: In cost book, only prime cost and factory overhead are considered for valuation of stock while in financial accounts it is valued at total cost of production I.e in addition to work costs office overhead are also included hence it is necessary to adjust it while preparing reconciliation statement.

10. Explain the valuation of stock in financial and cost accounts?Answer: In financial accounts stock are valued at cost price or market price whichever is less while is cost accounting it is shown only at its cost price.

Illustration 1:(When profits as per financial and cost accounts are given). The profit shown in the financial accounts was Rs. 1,12,870 and for the same period the cost accounts showed a profit of Rs. 27,040.

ILLUSTRATION 3. (When profits as per financial and cost accounts are given). Red Ltd. made a profit of rs 20,000 during the year 2011 as per their costing system, whereas their Final Accounts disclose a profit of rs 15,000. From the following Profit and Loss Account for the year ended 31st December, 2011 as per the financial books, you are required to prepare a Reconciliation Statement showing the causes for this difference :

ILLUSTRATION 4. (When profits as per financial & cost accounts are given). From the following summary of Trading and Profit and Loss Account which appears in the financial accounts of X. Ltd., and the additional information given, you are required to prepare detailed statement reconciling the profit of rs 60,570 as disclosed by the Financial Accounts with the figure of profit i.e. rs 54,65p as disclosed in Cost Accounts.

ILLUSTRATION 5. (Where profit as per cost accounts is given). From the following data prepare a reconciliation statement :

ILLUSTRATION 6. (When profits as per financial and cost accounts are given). The net profit of A. Co. Ltd. appeared at rs 60,652 as per financial records for the year ending 31st March, 2012. The Cost Books, however, showed a net profit of rs 86,200 for the same period. A scrutiny of the figures from both the sets of accounts revealed the following facts : 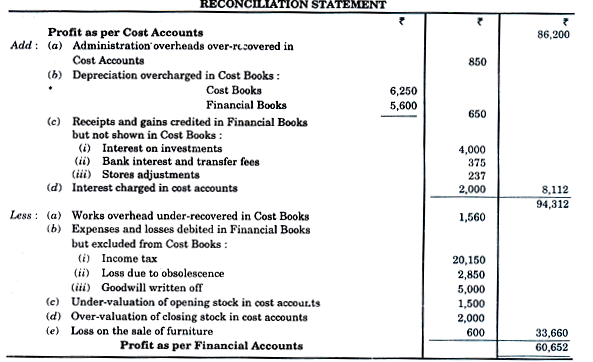 ILLUSTRATION 7. (When both profits are not given). A firm of Sports Equipments commenced business on 1-4-2011 for manufacturing 2 varieties of bats, Senior' and 'Sub-Junior'. Following information has been extracted from the accounts records for the half-year period ended 30.9.2011:

You are required to prepare a statement showing :
(1) the profit-tr each brand-piece of bat; charge labour and material at actual average cost, works am-rinses at 100% on labour cost and office cost at 25% of works cost.
(2) financial profit for the half-year ending 30-9-2011.
(3) reconciliation between profit as shown by cost accounts and financial accounts.
Solution: 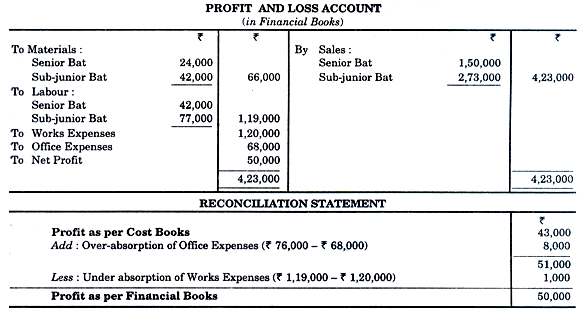 ILLUSTRATION 8. (When both profits are not given). Following figures were available in respect of Ashok Engineering Company for the year ended 31st March, 2012: 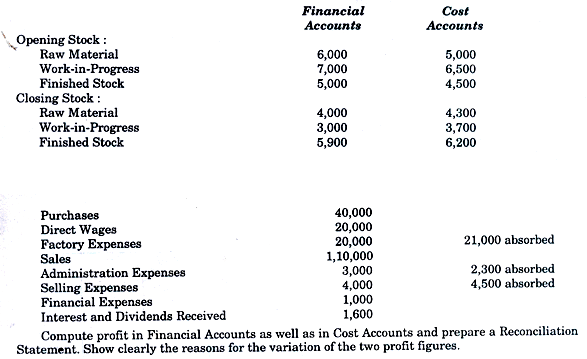 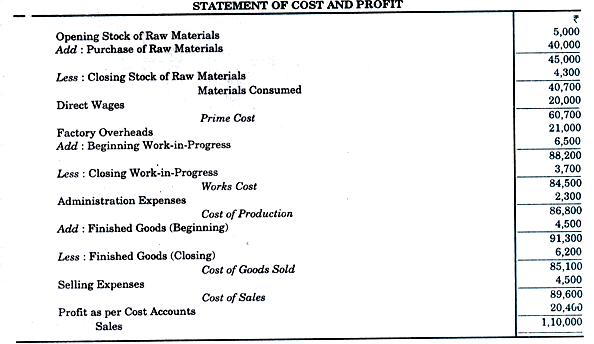 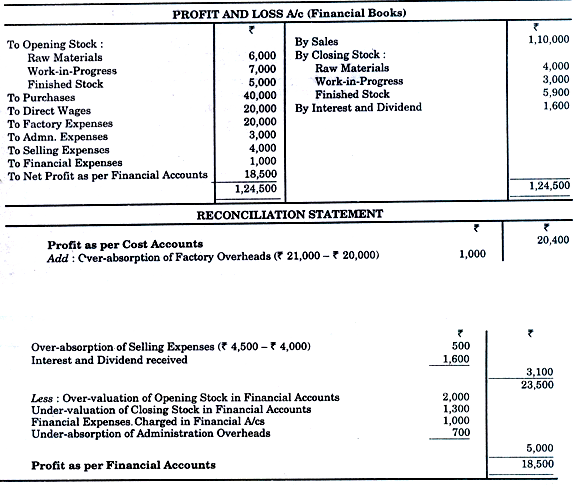 ILLUSTRATION 9. (When both profits are not given). Ashoka Engineering Co. manufactures two sizes of'a machine component, Size A and Size B. Following data refer to the year ended 31st March, 2012:

All expenses other than wages and materials are analysed under 'works overheads' which during the year amounted to rs 9,000 and 'office overheads' which amounted to rs 10,000. In fixing the selling price it was.estimated that works overheads should be taken at 50% on wages and office overhead expenses at 335% on works cost. You are required to compute the following :(a) The total coat of each unit on the basis of the above overhead percentages ;(b) The net profit for the year shown by the financial accounts, valuing unsold stocks at actual material and wages cost plus works overheads at 50% on wages ; and(c) The reconciliation of net profit in (b) above with estimated total net profit based on cost figures.Solution: 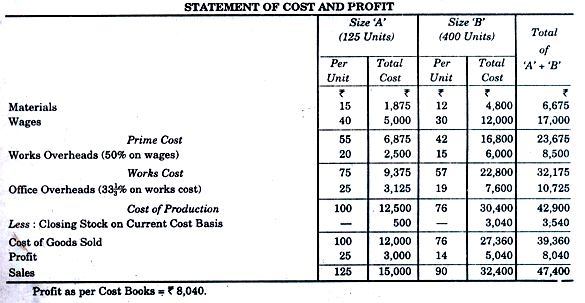 ILLUSTRATION 10. (When profits as per finanical accounts is given). Following is a summary of the Trading and Profit and Loss Account of Messrs Alpha Manufacturing Co. Ltd. for the year ended 31st March, 2012 :

The company manufactures a standard unit. In the Cost Accounts :(i) Factory expenses have been recovered from production at 20 per cent on Prime Cost ;(ii) Administration expenses at 3 per unit on units produced ;(iii) Selling and distribution expenses at 4 per unit on units sold.You are required to prepare a statement of cost and profit in cost books of the company and to reconcile the profit disclosed with that shown in the Financial Accounts.Solution:

ILLUSTRATION 11. (When both profits are not given) The financial records by Modern Manufacturers Ltd. reveal the following data. for the year ended March 31, 2012 : 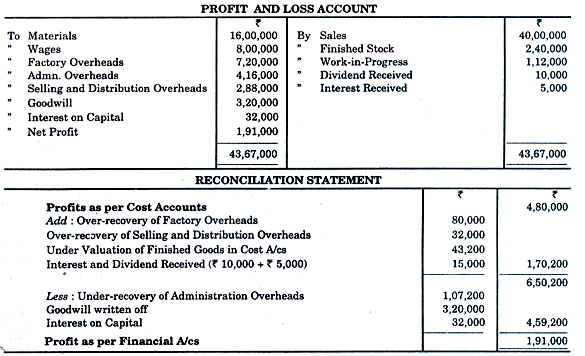 ILLUSTRATION 12. (When actual and normal output are given). Following information is available from the financial books of a company having a normal production capacity of 60,000 units for the year ended 31st March, 2012 :(i) Sales rs 10,00,000 (50,000 units).(ii) There was no opening and closing stock of finished units.(iii) Direct material and direct wages cost were rs 5,00,000 and rs 2,50,000 respectively. (iv) Actual factory expenses were rs 1,50,000 of which 60% are fixed.(v) Actual administrative expenses were rs 45,000 which are completely fixed.(vi) Actual selling and distribution expenses were rs 30,000 of which 40% are fixed.(vii) Interest and dividends received rs 15,000.You are required to :(a) Find out profit as per financial books for the year ended 31st March, 2012 ;(b) Prepare a statement of cost and profit to ascertain the profit as per cost accounts for the year ended 31st March, 2012 assuming that the indirect expenses are absorbed on the basis of normal production capacity ; and(c) Prepare a statement reconciling profits shown by financial and cost books.Solution: 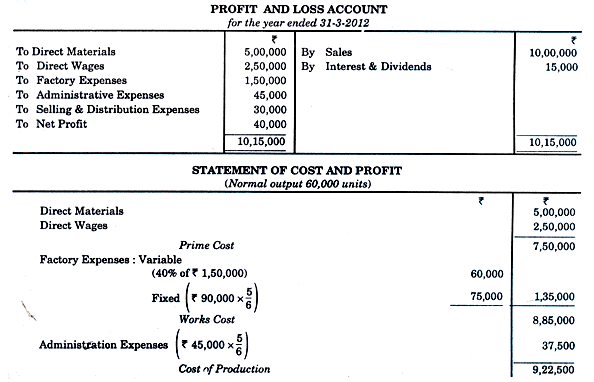 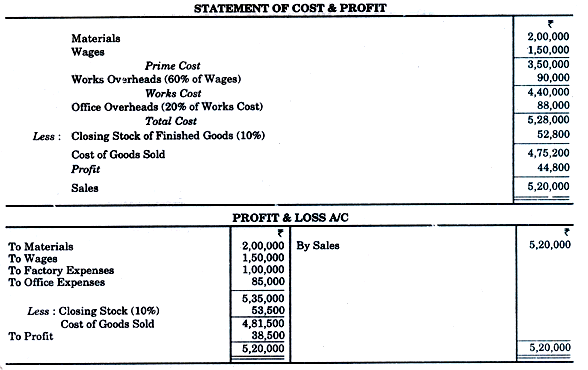 As per the cost records the direct expenses have been estimated at a cost of 30 per kg. and administration expenses at rs 15 per kg. During the year production was 6,000 kgs. and sales were 4,800 kgs.Prepare a statement of costing profit and loss account and reconcile the costing profit with financial profit.Solution: 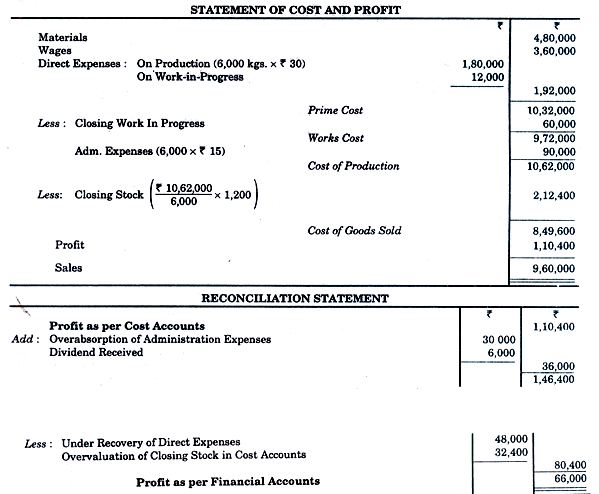 ILLUSTRATION 15. (When cost ledger accounts are to be prepared before reconciliation). Following figures have been extracted from the Cost Records of a manufacturing unit : 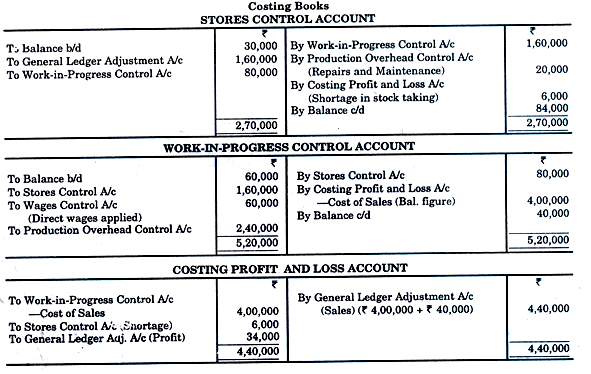