Butadiene is important raw material for production of a larger number of synthetic rubber and polymers such as styrene butadiene rubber (SBR), poly butadiene, chloroprene rubber, nitrile rubber, acrylonitrile butadiene styrene plastic. Other fastest growing use is in the manufacture of adiponitrile used in the manufacture of Nylon 66, Steam cracker and catalytic dehydrogenation of butenees are the two major sources of butadiene. Butenes can be recovered from C4 stream or produced by dehydrogenation of butanes.

There are four major routes for production of butadiene:

C4 cut from the steam cracker is first sent for butadiene recovery, which includes selective hydrogenation of acetylenics in the presence of palladium catalyst, then separation of butadiene extractive distillation process steps involved are:

2. Catalytic dehydrogenation of butenes to butadiene

Extraction of C4 cuts from steam cracking / FCC: Isobutylene is separated from C4 cuts from naphtha cracker after extraction of butadiene and from FCC gases after propylene recovery. First isobutylenes is converted to MTBE by etherification and the recovered by cracking of MTBE to get polymer grade isobutylene it is also obtained by hydration of isobutylene containing stream and then cracking.

Isomerisation of Butene: isobutylene can be also produced from butane by isomerisation using zeolite ferrierite (zeolite of medium pore size)

Butene-1 is co-monomer in the production of low density polyethylene and high density polyethylene. Butene-1 can be separated from C4 stream of cracker after extraction of butadiene SHB-CB process: This process selectively hydrogenate the butadiene in the C4 cut by converting it to butane-1 and butane-2. Acetylenes and dienes are likewise hydrogenated. If the process is optimized to produce butane-1, about 60% of butadiene is converted to butane-1. The process is operated in the liquid phase mild temperatures and moderate pressures.

The steam cracker C5 stream is a rich resource of olefins and diolefins which can be upgraded to produce elastomers, resins and fine chemical intermediates. In steam crackers during cracking process along with ethylene, propylene, C4 stream, aromatics and pyrolysis gasoline bare also formed. Apart from aromatics, Pyrolysis gasoline stream also contains C5 stream. The quantity and composition of the stream depend on the nature of the cracked product and severity of cracker operation C5 stream.

Various Steps in the recovery of C5 chemicals are

Solvents used in extraction of isoprene are Acetonitrile, N-methylpyropedone, Dimethylformalnide.

Several oxygenated fuel components have figured prominently in refinery reformulated gasoline planning. Methyl tertiary butyl ether (MTBE), tertiary amyl methyl ether (TAME) and ethyl tertiary butyl ether (ETBE). All oxygenated fuels reduce hydrocarbons in the automobile exhaust. MTBE was considered one of the most important oxygenates used in the production of lead free gasoline and was used produced on a large scale throughout the world. There has been because of environmental problem. The oxygenated MTBE and ETBE are produced by the reaction of methanol/ethanol and isobutylene.

MTBE is one of the important oxygenates and originally its use started as a substitute of tetraethyl lead. MTBE increases the oxygen content of gasoline results in the reduction of harmful emissions. MTBE which is made by etherification of C4 gases from cracker and FCC is also used for production of polymer grade isobutylene for synthetic rubber.

MTBE is produced by the reaction of methanol with isobutylene contained in C4 streams from thermal crackers in the presence of ion exchange resin at 40-90oC and a pressure of 5 to 10 kg/cm2g. Catalytic cracking butylenes and field butanes are additional possible source of isobutylene. Convention process and catalytic distillation are the two commercial processes available. Figure M-VII 3.3 shows the process flow diagram fro MTBE conventional methods. 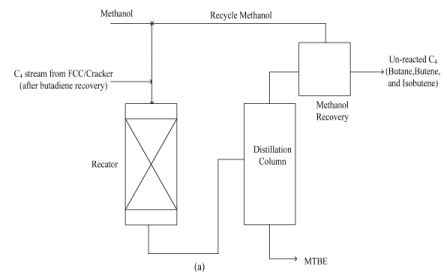 ETBE is made by etherification of isobutylene with ethanol similar to MTBE.

TAME is produced by etherification of isoamylenes recovered from C5 stream of FCC and steam crackers. Two reactive components of iosmaylenes are 2-Methyl butene-1 and 2-Methyl butene-2. Catalytic distillation process is used for the manufacture of TAME. 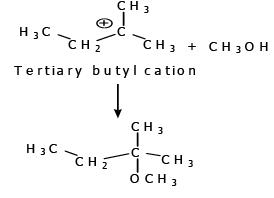 TAME is produced by etherification of isoamylenes recovered from C5 stream of FCC and and steam crackers. Two reactive components of iosmaylenes are 2-Methyl butene-1 and2-Methyl butene-2. catalytic distillation process is used for the manufacture of TAME 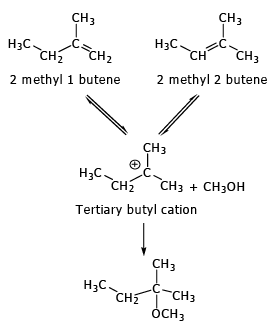