Pass the Journal entries to rectify the above errors and state what amount was carried to the Suspense Account. 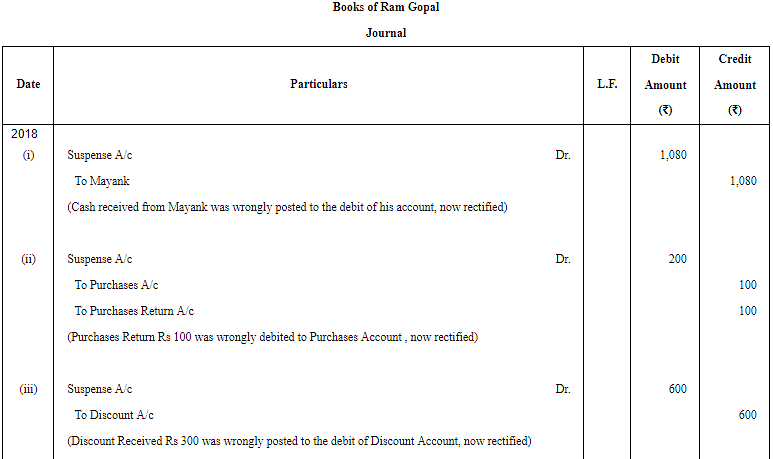 Question 43: Trial Balance of a bookkeeper shows an excess of debits over credits by ₹ 261. This difference is placed in a Suspense Account to facilitate books closure. Later on the following errors were discovered:(i) A credit item of ₹ 349 has been debited to a Personal Account as ₹ 439.(ii) A sum of ₹ 625 written off from fixtures as depreciation has not been posted to the Depreciation Account.(iii) ₹ 9,000 paid for furniture bought have been charged to the Purchases Account.(iv) A discount allowed to a customer has been credited to him as ₹ 145 in place of ₹ 154.(v) A sale of ₹ 594 was posted as ₹ 495 in the Sales Account.(vi) The total of Returns Inward Book has been added ₹ 10 short.

Pass the Journal entries to correct these errors and prepare the Suspense Account. 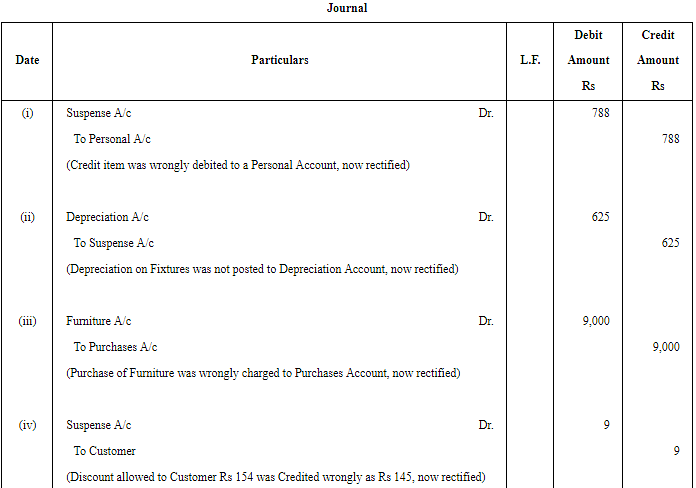 Question 44: The accountant of a firm finds that the Trial Balance as on 31st March, 2019 is out by an excess debit of ₹ 283. He placed the amount in the Suspense Account. In the first week of April, 2019, he discovered the following errors. Pass the Journal entries necessary to rectify these errors and show the Suspense Account as it would appear at the end of the week. Have you any comment to make?(i) Cash paid to Amar Nath, ₹ 75, was posted to the credit of Amar Singh's Account as ₹ 57.(ii) Discount allowed by Brijesh of ₹ 5 was not entered in the Cash Book but Brijesh stands debited correctly.(iii) No entry was made for goods worth ₹ 40 taken away by proprietor for personal use.(iv) ₹ 500 received from Jhaveri Bros. for interest on loan advanced to them were recorded in the Cash Book. But the entry was not posted in the Ledger.(v) The total of Returns Outward Book was short by ₹ 100. 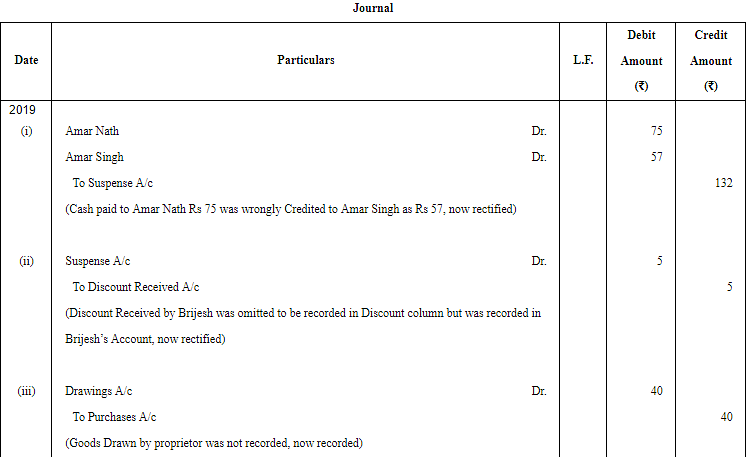 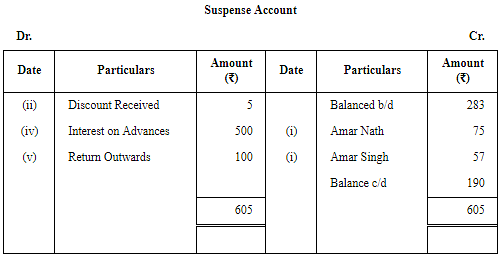 There is some error in the book of account after rectifying the traced error, Suspense Account is not closed.

Question 45: Rectify the following errors found in the books of Bheem. Trial Balance had ₹ 930 excess credit. The difference has been posted to a Suspense Account:(i) The total of Returns Inward Book has been cast ₹ 1,000 short.(ii) The purchase of an office table costing ₹ 3,000 has been passed through the Purchases Book.(iii) ₹ 3,750 paid for wages to workmen for making showcases had been charged to the Wages Account.(iv) A purchase of ₹ 670 had been posted to the Creditors' Account as ₹ 600.(v) A cheque for ₹ 2,000 received from Nakul had been dishonoured and was passed to the debit of the Allowances Account.(vi) An amount of ₹ 15,720 due from Prasad written off as had in a previous year, was recovered and credited to the Personal Account of Prasad.After rectification reflect the transactions in the Suspense Account.ANSWER: 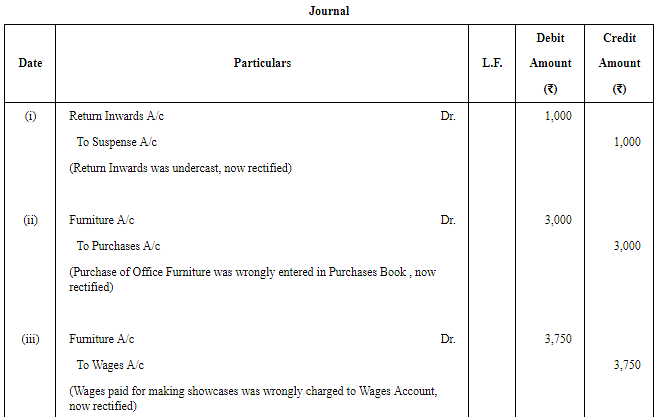 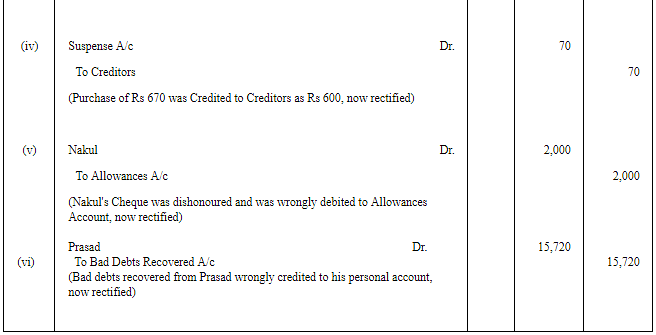 Question 46: The Trial Balance of M/s. Gupta & Sons shows a difference of ₹ 52,200. To prepare the Final Account on 31st March, 2019, this difference is placed in a Suspense Account. Afterwards the following errors were disclosed. Pass the necessary entries to rectify them and show the Suspense Account.(i) Purchases Book total had been undercasted by ₹ 20,000.(ii) A cheque received from Vasudev for ₹ 7,800 had been debited in the Cash Book but not posted in Vasudev’s Personal Account.(iii) Returns Outward Book had been overcasted by ₹ 10,000.(iv) Goods returned by Yash Pal worth ₹ 15,000 have been entered in Returns Outward Book. However, Yash Pal’s Account is correctly posted.ANSWER: 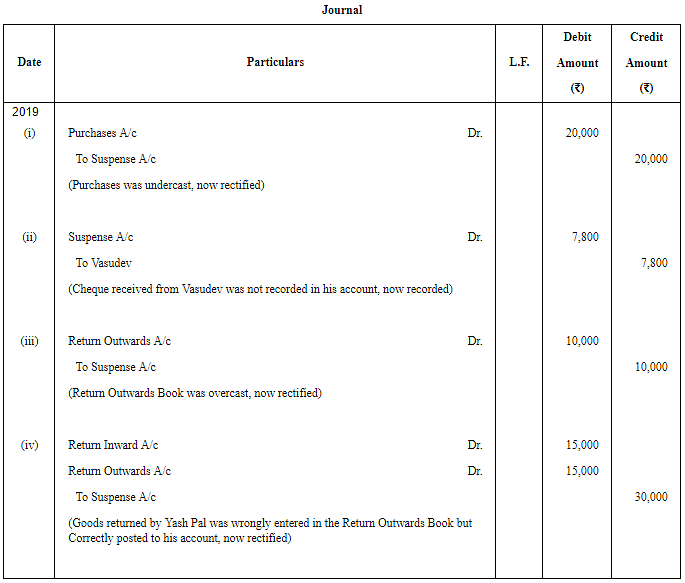 Question 47: The Trial Balance of S. Sen did not agree and the difference in books was carried to a Suspense Account. Pass the entries required to rectify the following errors which accounted for the difference. Also, prepare the Suspense Account:(i) A Sales Invoice for ₹ 1,000 for goods sold on credit to B. Basu was entered in the Purchases Book but in the Ledger, the amount was correctly debited to the account of B. Basu.(ii) Goods bought on credit from Ram Lal for ₹ 1,500 were wrongly debited to his account as ₹ 5,100(iii) An amount of ₹ 275 was posted as ₹ 325 to the debit side of the Commission Account.(iv) The Sales Book for the month of April was undercasted by ₹ 100.(v) ₹ 460 paid for building repairs was debited to the Building Account as ₹ 640.ANSWER: 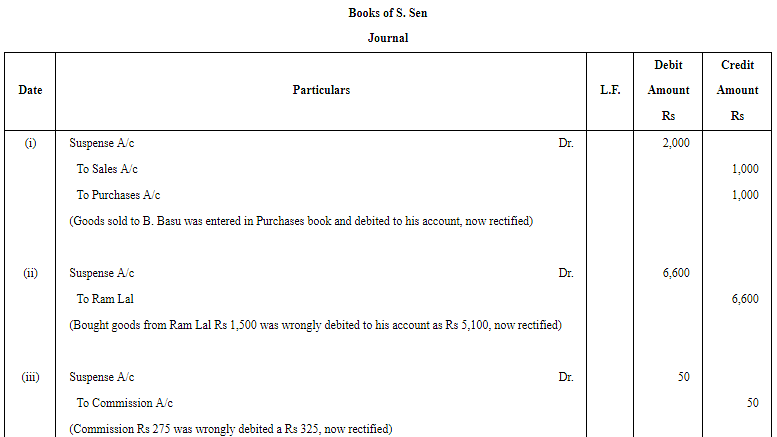 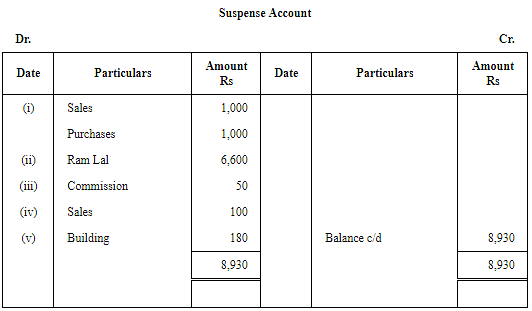 Question 48: The bookkeeper of a firm found that his Trial Balance was out (excess credit) by ₹ 742. He placed the amount in a Suspense Account and subsequently found the following errors:(i) A discount of ₹ 178 was allowed to Ramesh but in his account only ₹ 100 is recorded.(ii) The total of the Purchases Book was ₹ 1,000 short.(iii) A sale of ₹ 375 to Kohli was entered in the Sales Book as ₹ 735.(iv) From the Purchases Book, Bose’s Account was debited with ₹ 175.(v) Cash ₹ 250 received from Maitra against debt previously written off was credited to his account.(vi) Purchase of office furniture worth ₹ 750 on credit from Delhi Furnitures was entered in the Purchases Book.(vii) While carrying forward the total of the Sales Book from one page to another the amount of ₹ 11,358 was written as ₹ 11,538.(viii) The proprietor took goods of the value of ₹ 150 for his domestic consumption. No record of it has been made in the books.(ix) Repairs bill of ₹ 410 for the proprietor’s personal car, has been paid by the firm and debited to the Repairs Account.(x) A sale to Kassim of ₹ 700 has been entered in the Purchases Book.

Rectify the errors by means of suitable Journal entries and show the Suspense Account.ANSWER: 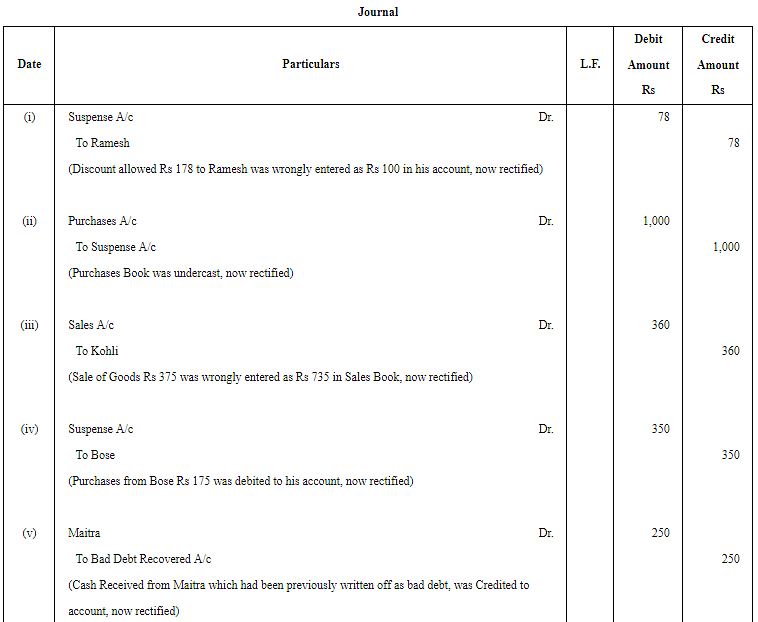 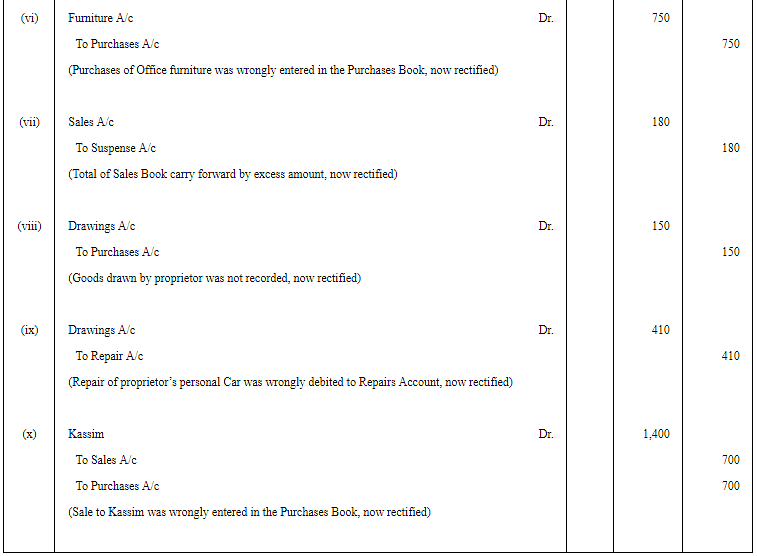