Question 24: Give rectifying Journal entries for the following errors:(i) Sales of goods to Madan ₹ 6,000 were entered in the Sales Book as ₹ 600.(ii) Credit purchase of ₹ 1,500 from Ajay has been wrongly passed through the Sales Book.(iii) Repairs to building ₹ 300 were debited to Building Account.(iv) ₹ 2,050 paid to Rohit is posted to the debit of Mohit’s Account as ₹ 5,020.(v) Purchases Return Book is overcasted by ₹ 400. 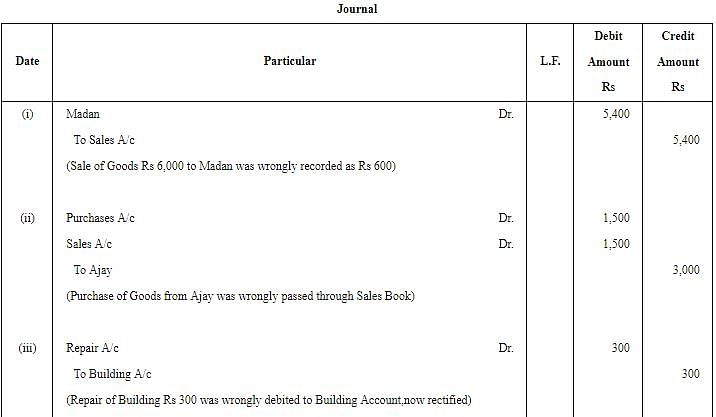 Question 25: Give rectifying entries for the following:(i) ₹ 5,400 received from Mr. A was posted to the debit of his account.(ii) The total of Sales Return Book overcasted by ₹ 800.(iii) ₹ 2,740 paid for repairs to motor car was debited to Motor Car Account as ₹ 1,740.(iv) Returned goods to Shyam ₹ 1,500 were passed through Returns Inward Book.ANSWER: 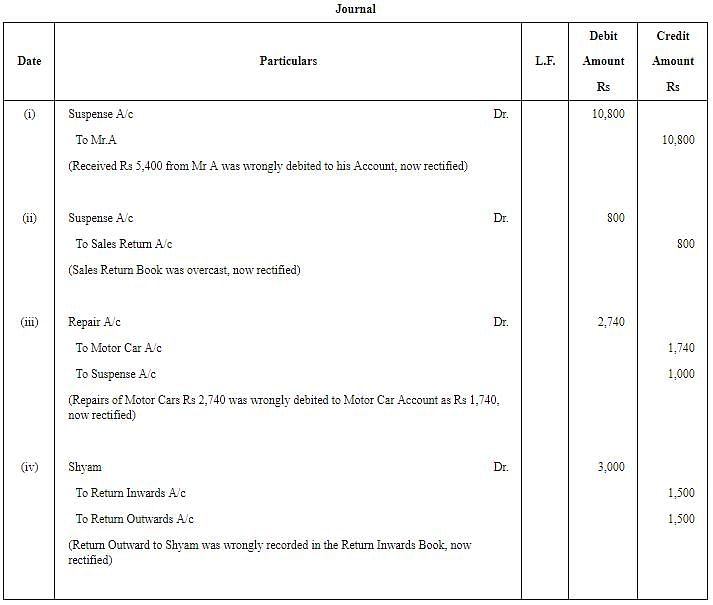 Question 26: Pass Journal entries rectifying the following errors:(i) A cheque for ₹ 10,000 was received from Ranjan on which ₹ 200 Cash Discount was allowed. The cheque was not honoured on due date and the amount of discount was credited to Discount Received Account.(ii) ₹ 2,000 paid as wages for machinery installation was debited to Wages Account.(iii) ₹ 5,000 received from Rakesh were credited to his Personal Account. The amount had been written off as bad debts earlier.(iv) Repair bill of machinery was recorded as ₹ 100 against the bill amount of ₹ 1,000. 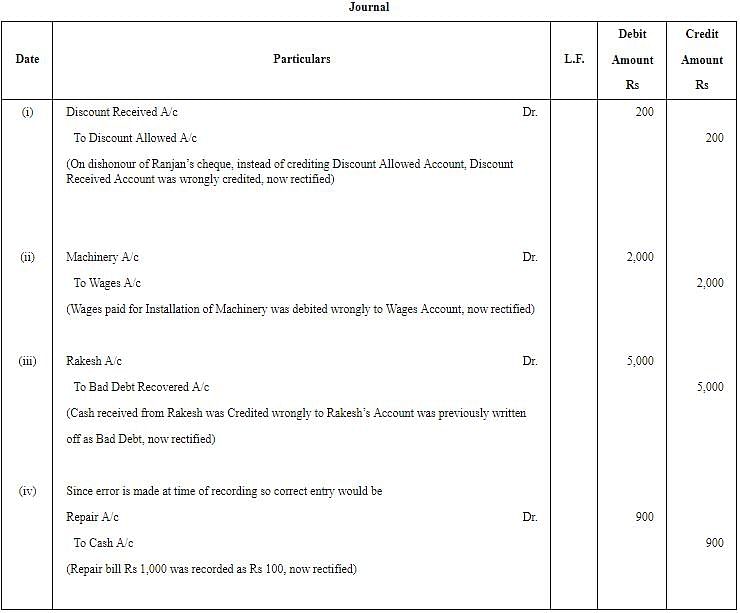 Question 27: Rectifying the following errors:(i) Sales Book has been totalled ₹ 1,000 short.(ii) Goods worth ₹ 1,500 returned by Green & Co. have not been recorded anywhere.(iii) Goods purchased worth ₹ 2,500 have been posted to the debit of the supplier, Gupta & Co.(iv) Furniture purchased from Gulab & Co. worth ₹ 10,000 has been entered in Purchases Book.(v) Cash received from A ₹ 2,500 has not been posted in his account. 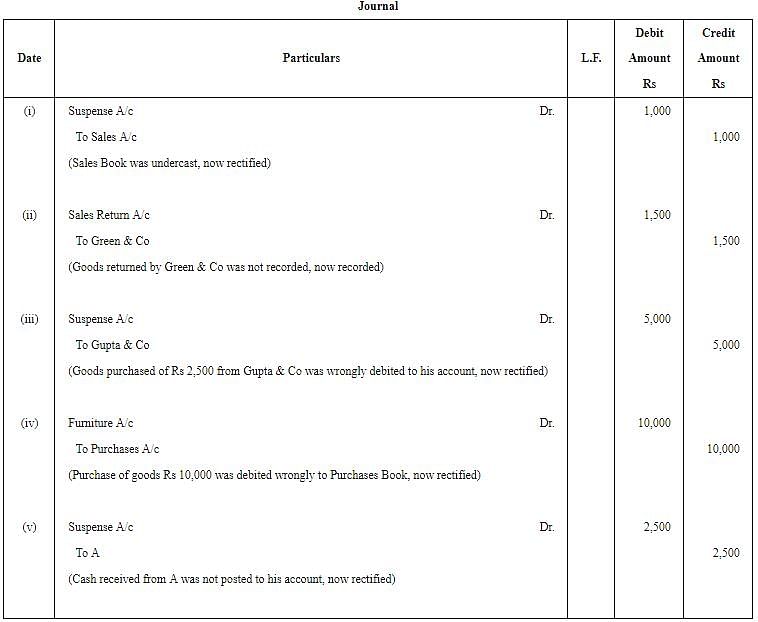 Question 28: Pass Journal entries to rectify the errors in the following cases:(i) A purchase of goods from David amounting to ₹ 150 has been wrongly passed through the Sales Book.(ii) A credit sale of goods of ₹ 120 to Peter has been wrongly passed through the Purchases Book.(iii) ₹ 200, salary paid to Cashier, Bimal, stands wrongly debited to his Personal Account.(iv) A credit sale of ₹ 4,230 to Krishan entered as purchase from Kishan ₹ 4,320.(v) Ramesh's Account was credited with ₹ 840 twice instead of once. 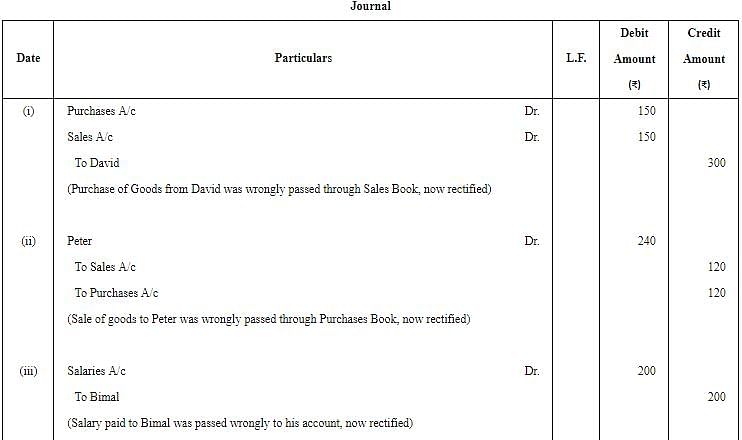 Question 29:(i) What are the different causes that make a Trial Balance incorrect?(ii) Pass the rectifying Journal entries:(a) A credit sale of goods for ₹ 2,500 to Krishna has been wrongly passed through the Purchases Book.(b) ₹ 5,000 paid for freight on machinery purchased was debited to the Freight Account as ₹ 500.|(c) The Returns Inward Book has been wrongly overcasted by ₹ 100.(d) An amount of ₹ 500 due from Ramesh which had been written off as bad debt in previous year was recovered and had been posted to the Personal Account of Ramesh.(e) A sum of ₹ 460 owed by Hari had not been included in the list of debtors.

ANSWER:(i) The following are the causes that make a Trial Balance incorrect.

6) Wrong totalling of the Trial Balance 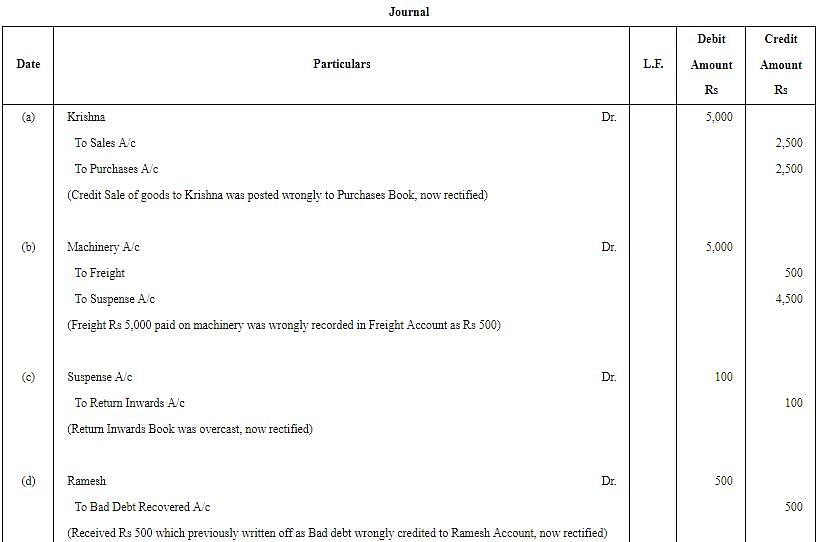