The use of polished mirrors for reflecting light has been known for thousands of years, and concave mirrors have long been used to form real images of distant objects. Indeed, Isaac Newton greatly preferred the use of a mirror as a telescope objective to the poor-quality lenses available in his time. Because there is no limit to the possible size of a mirror, all large telescopes today are of this type.When a ray of light is reflected at a polished surface, the angle of reflection between ray and normal (the line at right angles to the surface) is exactly equal to the angle of incidence. It can be seen that a convex mirror forms a virtual image of a distant object, whereas a concave mirror forms a real image. A plane mirror forms a virtual image of near objects, as in the familiar looking glass. Plane mirrors are often used in instruments to bend a beam of light into a different direction.

The law of refraction:

When a ray of light meets the surface of separation between two transparent media, it is sharply bent or refracted. Because rays are really only directions and have no physical existence, the passage of light waves through a surface must be considered if refraction is to be understood. Refraction effects are based on the fact that light travels more slowly in a denser medium. The ratio of the velocity of light in air to its velocity in the medium is called the refractive index of the medium for light of a particular colour or wavelength. The refractive index is higher for blue light than for light at the red end of the spectrum.

In Figure 1, AA′ represents a plane wave of light at the instant that A′ meets the plane refracting surface A′B separating two media having refractive indices n and n′, respectively. During the time taken by the light to travel from A to B in material n, light travels from A′ to B′ in material of refractive index n′, forming the new wave BB′ in the second material, proceeding in direction BC. Hence, the relationship n′/n = AB/A′B ′ can be obtained; and dividing numerator and denominator by BA′ gives 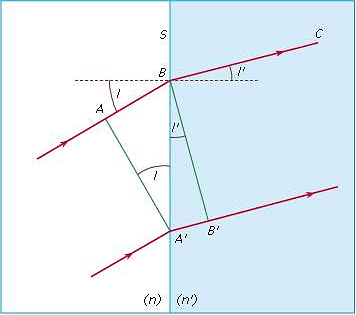 The angles I and I′ are called the angle of incidence and angle of refraction between the refracting surface and the incident and refracted waves, respectively.

When a ray of light emerges obliquely from glass into air, the angle of refraction between ray and normal is greater than the angle of incidence inside the glass, and at a sufficiently high obliquity the angle of refraction can actually reach 90°. In this case the emerging ray travels along the glass surface, and the sine of the angle of incidence inside the glass, known as the critical angle, is then equal to the reciprocal of the refractive index of the material. At angles of incidence greater than the critical angle, the ray never emerges, and total internal reflection occurs, for there is no measurable loss if the glass surface is perfectly clean. Dirt or dust on the surface can cause a small loss of energy by scattering some light into the air.

Light is totally internally reflected in many types of reflecting prism and in fibre optics, in which long fibres of high-index glass clad with a thin layer of lower index glass are assembled side-by-side in precise order. The light admitted into one end of each fibre is transmitted along it without loss by thousands of successive internal reflections at the interlayer between the glass and the cladding. Hence, an image projected upon one end of the bundle will be dissected and transmitted to the other end, where it can be examined through a magnifier or photographed. Many modern medical instruments, such as cystoscopes and bronchoscopes, depend for their action on this principle. Single thick fibres (actually glass rods) are sometimes used to transmit light around corners to an otherwise inaccessible location.

The document Reflection and Refraction Notes | Study Physics For JEE - JEE is a part of the JEE Course Physics For JEE.
All you need of JEE at this link: JEE
Join Course