INTRODUCTIONIn the last chapter we studied the concept of statistical relationship between two variables such as -amount of fertilizer used and yield of a crop; price of a product and its supply, level of sales and amount of advertisement and so on.The relationship between such variables do indicate the degree and direction of their association, but they do not answer the question that whether there is any functional (or algebraic) relationship between two variables? If yes, can it be used to estimate the most likely value of one variable, given the value of other variable?“In regression analysis we shall develop an estimating equation i.e., a mathematical formula that relates the known variables to the unknown variable. (Then, after we have learned the pattern of this relationship, we can apply correlation analysis to determine the degree to which the variables are related. Correlation analysis, then, tells us how well the estimating equation actually describes the relationship). The variable which is used to predict the unknown variables is called the ‘independent’ or ‘explaining’ variable, and the variable whose value is to be predicted is called the ‘dependent’ or ‘explained’ variable.” Ya-lun Chou

DISTINCTION BETWEEN CORRELATION AND REGRESSIONBy correlation we mean the degree of association or relationship between two or more variables. Correlation does not predict anything about the cause & effect relationship. Even a high degree of correlation does not imply necessarily that a cause & effect relationship exists between the two variables.Whereas in case of regression analysis, there is a functional relationship between Y and X such that for each value of Y there is only one value of X. One of the variables is identified as a dependent variable the other(s) as independent valuable(s). The expression is derived for the purpose of predicting values of a dependent variable on the basis of independent valuable(s).

The regression equation of X on Y is expressed as follows:

Xc = a + bYWhere a and b can be found out by solving the following two normal equations simultaneously:

Regression equation of X on Y is given by :X = a + bYWhere a & b can be found out by solving the following 2 equations simultaneously –

Example 16 : From the data of the previous example find the two regression equation by taking deviations from actual mean.Soluation :Table : Calculation Regression Equations

Regression equation of x on Y

putting the value of bYX in the above equation & also put

Regression equation of Y on X

Putting the value of bYX in above equation & also put

METHOD III WHEN DEVIATIONS ARE TAKEN FROM ASSUMED MEANIn case the actual mean of the respective series are not an integer but are in decimals, it becomes cumbersome to calculate deviations from actual mean as all the values so calculated would also be in points. In such a case deviations are taken from assumed mean to simplify the calculations.Regression equation of X on Y is given by

Regression equation of Y on X is given as

are not an integer we would solve it by taking assume mean of 15 from X series, and 25 from Y series

REGRESSION EQUATION OF X ON Y

By putting the values from the above table we get 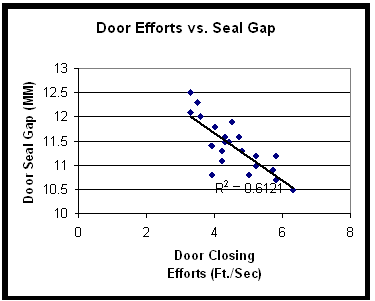 You can see that the data is clustered closely around the line, and that the line has a downward slope. There is strong negative correlation expressed by two related statistics: the r value, as stated before is, -0.78 the r2 value is therefore 0.61. R2, called the Coefficient of Determination, expresses how much of the variability in the dependent variable is explained by variability in the independent variable. You may find that a non-linear equation such as an exponential or power function may provide a better fit and yield a higher r2 than a linear equation.These statistical calculations can be made using Excel, or by using any of several statistical analysis software packages. MoreSteam provides links to statistical software downloads, including free software.Multiple Regression AnalysisMultiple Regression Analysis uses a similar methodology as Simple Regression, but includes more than one independent variable. Econometric models are a good example, where the dependent variable of GNP may be analyzed in terms of multiple independent variables, such as interest rates, productivity growth, government spending, savings rates, consumer confidence, etc.Many times historical data is used in multiple regression in an attempt to identify the most significant inputs to a process. The benefit of this type of analysis is that it can be done very quickly and relatively simply. However, there are several potential pitfalls: