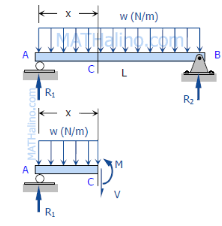 The moment at C is

If we differentiate M with respect to x:

Thus, the rate of change of the bending moment with respect to x is equal to the shearing force, or the slope of the moment diagram at the given point is the shear at that point.

Thus, the rate of change of the shearing force with respect to x is equal to the load or the slope of the shear diagram at a given point equals the load at that point.

Properties of Shear and Moment Diagrams

The following are some important properties of shear and moment diagrams:

An easier way of determining the sign of the bending moment at any section is that upward forces always cause positive bending moments regardless of whether they act to the left or to the right of the exploratory section.

Without writing shear and moment equations, draw the shear and moment diagrams for the beams specified in the following problems.Give numerical values at all change of loading positions and at all points of zero shear. (Note to instructor: Problems 403 to 420 may also be assigned for solution by semi-graphical method describes in this article.)