Remainder Theorem is an approach of Euclidean division of polynomials. According to this theorem, if we divide a polynomial P(x) by a factor (x – a); that isn’t essentially an element of the polynomial; you will find a smaller polynomial along with a remainder. This remainder that has been obtained is actually a value of P(x) at x = a, specifically P(a). So basically, x -a is the divisor of P(x) if and only if P(a) = 0. It is applied to factorize polynomials of each degree in an elegant manner.

The Remainder Theorem begins with a polynomial say p(x), where “p(x)” is some polynomial p whose variable is x. Then as per theorem, dividing that polynomial p(x) by some linear factor x – a, where a is just some number. Here go through a long polynomial division,  which results in some polynomial q(x) (the variable “q” stands for “the quotient polynomial”) and a polynomial remainder is r(x). It can be expressed as:p(x)/x-a = q(x) + r(x)

Factor TheoremFactor Theorem is generally applied to factoring and finding the roots of polynomial equations. It is the reverse form of the remainder theorem. Problems are solved based on the application of synthetic division and then to check for a zero remainder.When p(x) = 0 then y-x is a factor of the polynomial Or if we consider the other way, then When y-x is a factor of the polynomial then p(x) =0

Theorem functions on an actual case that a polynomial is comprehensively dividable, at least one time by its factor in order to get a smaller polynomial and ‘a’ remainder of zero. This acts as one of the simplest ways to determine whether the value ‘a’ is a root of the polynomial P(x).That is when we divide p(x) by x-a we obtainp(x) = (x-a)·q(x) + r(x),as we know that Dividend = (Divisor × Quotient) + Remainder

Steps to Divide a Polynomial by a Non-Zero Polynomial 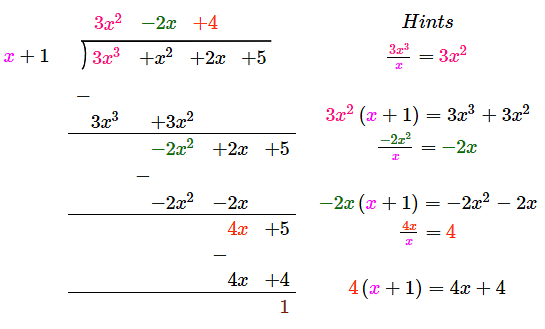 Euler’s theorem states that if n and X are two co-prime positive integers, then

Questions of the form: ma/n

Remaining power is 4, which when divided by 35 given the resultant remainder. which is,

Thus the remainder comes out to be 11.

All the standard Algebraic Identities are derived from the Binomial Theorem, which is given as: