Causal System:A system is causal if the output at any time depends only on values of the input at the present time and in the past. Such a system is often referred to as being nonanticipative, as the system output does not anticipate future values of the input. Consequently, if two inputs to a causal system are identical up to some point in time to or no the corresponding outputs must also be equal up to this same time.y1(t) = 2x(t) + x(t-1) + [x(t)]2 ⇒ Causal Signaly1(t) = 2x(t) + x(t-1) + [x(t+2)] ⇒ Non-Causal SignalHomogeneity (Scaling):A system is said to be homogeneous if, for any input signal X(t), i.e. scaling any input signal scales the output signal by the same factor.

Time-Shifting / Time Reversal / Time Scaling Time Shifting is simply shifting the signal in time. When we add a constant to the time, we obtain the advanced signal, & when we decrease the time, we get the delayed signal.

Time Scaling: Due to the scaling in time the output Signal may shrink or strech it depends on the numerical value of scaling factor. 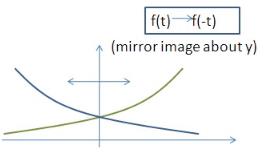 which may be considered as a “power” based definition.(b) For a finite duration waveform: If the waveform exists only in the interval t1 ≤t ≤ t2.

which may be considered as an “energy” based definition.(c) For a periodic waveform: If f(t) is periodic with period T.

for an arbitrary t0, which again may be considered as a “power” based definition.Example: Find the auto-correlation function of the square pulse of amplitude a and duration T as shown below. 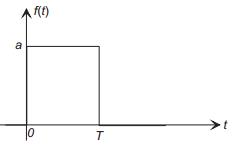 The wave form has a finite duration, and the auto-correlation function is

The auto-correlation function is developed graphically below Properties of the Auto-correlation Function

in the case of infinite duration waveforms, and

for finite duration waveforms.Example: Find the cross-correlation function between the following two functions.

In this case g(t) is a delayed version of f(t). The cross-correlation is where the peak occurs at  τ = T2 − T1 (the delay between the two signals).Properties of the Cross-Correlation Function

The Cross-Power/Energy SpectrumWe define the cross-power/energy density spectra as the Fourier transforms of the cross-correlation functions: