I. STRUCTURE OF SEED

The whole plant exists in a seed. Plant is the main base of whole living world . So it can be say that seed is the most important structure. In angiosperm, after the fertilization , egg cell changed into embryo,  ovary changed into fruit and ovule change into seed .

Morphologically, ripened ovule is known as seed . In other words, seed is amature, integumented megasporangium.

Seeds are characteristic of Spermatophytes (Gymnosperms and Angiosperms). Typical mature seed is having three main parts :

The seed is attached to the fruit wall or pericarp by means of a stalk called funicle or funiculus . The point of attachment of funiculus to the body of mature seed is called hilum. A small opening or pore called micropyle is present just near the hilum, which is the way of entry of water into the seed. As most of the ovules in angiosperms are inverted or anatropous, so a ridge called raphe is present.

2. Embryo : Embryo is the most important part of the seed , which represents minior tiny future plant. Embryo develops from fertilized egg [zygote].

In some seeds (e.g. legumes), reserve food is s tored in cotyledons , whereas in others (e.g . cereals), there is special nutritive tissue called endosperm. The seeds having endosperm are called endospermic or albuminous seed, e.g ., Cereals, Castor , etc . , whereas seeds in which endosperm is fully consumed by embryo and noendoserm is left, are called non-endospermic or ex -albuminous seeds , e .g., Gram , Pea, Sem, Cucumber , Tamarind , etc.  here serve food materials in seeds may be carbohydrate (e .g., Wheat, Rice ) or proteins ( legumes) or fats ( Castor, Peanut, Sunflower ), etc.

Some time, some part of nucellus remains unused which is present in the form of thin layer around the endosperm is called perisperm . e.g. Betelnut , Black pepper, Castor .

3. Endosperm : It is the nutritive tissue which may present or absent in the seeds. The angiospermic seed classified into two categories on the basis of presence or absence of endosperm in seeds -

Capsella and most of  dicotyledons. But Castor seed is endospermic.

2. Endospermic or Albuminous seed : This type of seeds, food is stored in endosperm . Such seeds are called endospermic seed OR Albuminous seed. The endospermic tissue in these seeds utilize during the germination of seed and their cotyledons are thin and membranous e.g. Most of Monocot seeds e.g. Wheat, Rice , and Maize etc.

Bean seed is kidney shaped having a concave side and a convex side. The concave side is slightly darker and posses a white elongated scar is called hilum, which marks the point of attachment of the seed with the funiculus. A small pore lies adjacent to the hilum, called m ic rop y le, which performs the function of absorbing water during germination. There is a short ridge on the other side of hilum. It is called ra phe.

The Bean seed has two see d c o ats . The outer seed coat is called test a. It is hard, thick, s mooth and variously coloured. It develops from outer integument of ovule. The inner coat is white, membranous and thin. It is called tegmen. It is difficult to separate tegmen from testa. The seed coats can easily be removed if the seeds are soaked in water for a few hours. 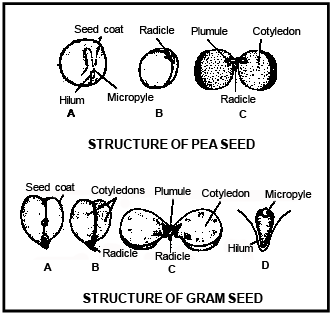 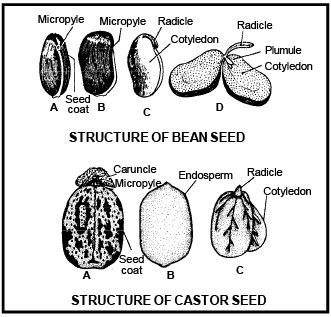 Each seed encloses an embryo which can be examined after removing the seed coats. The bulk of embryo consists of two large, white and kidney-shaped cotyledons (or seed leaves). They store re serv e food material in the form of carbohydrates and protei ns to provide nourishment to embryo at the time of seed germination and growth of young seedling. The cotyledons are attached laterally to the curved embryonal axis at the cotyledonary node. The micropylar end of embryonal axis is rod-shaped and slightly bulged. It is called radicle (or the embryonic root). The other side of embryonal axis lies in between the two cotyledons. It is called plumule (or the shoot tip). The shoot tip remains protected by two small, folded leaves. The portion of embryo axis between the plumule and cotyledonary node is called epi coty l. The portion of axis between the radicle and cotyledonary node is c alled hyp ocotyl.

STRUCTURE OF MAIZE GRAIN [SEED]A grain of Ma ize (Z ea m ays ) is infect a dry one-seeded indehisc ent frui t of c ary ops is type in which pe ri ca rp (or fruit wall) is fused with the seed coat. The covering of grain enc loses tw o ma jor p art s-en dos pe rm and an embryo. As seen in longitudinal section, the major portion of grain is occupied by a large starchy e ndosperm.It i s sur ro unded by a sp ecial one-cel l ed t hick layer, called al euro n e l ay er. T he cel ls o f ale urone l ayer are filled with proteineous grains which play an important  role at the time of germination.The embryo consists of an upper shield-shaped sc u tellum which is actually a cotyledon. The scutellum is closely pressed against the endosperm and helps in the translocation of nutrients from endosperm to the growing embryo at the time of germination and seed growth. The epidermal tissue of scutellum lying in direct contact with the endosperm is both secretory and absorptive in function. It secretes certain hormones into the endosperm which synthesize enzymes. These enzymes are responsible for the decomposition of stored nutrients and convert them into soluble state. The soluble nutrients are then absorbed by ep ithe lial l ayer of scutellum and transferred to the g row i ng em b ryo .

The scutellum is attached laterally to the embryonal axis. One end of the embryonal axis points towards the p oi nt ed e nd of the grain. It is called rad ic le. The radicle is covered by a protective sheath called coleorhiza.The other end of embryonal axis, which faces towards the broader end of the grain, is called plumule. The plumule is s urrounded by a conical protective shea th, called coleoptile. The coleoptile is capable in growth and covers the growing shoot tip till it passes through the soil during germination.

II. G ER MI N AT ION O F S EE D :The process by which the dormant embryo wakes up [becomes active] and begins to grow is known as germination of seed. T he embr yo of seed grows in to a spo rophyte plan t. The radicle produces primary root. The plumule develops short and latter on cotyledons degenerates.Types of seed Germination : Germination is basically of two types, depending upon behaviour of cotyledons but viviparous germination also found :-

2. Hypogeal germination : Here due to growth in epicotyl plumule comes out of the ground and cotyledons remain underground. This is called hypogeal germination. This type of germination occurs in most of the monocytyledons and few dicotyledons, e.g., Maize, Rice, Wheat, Coconut, Gram, Pea, Pe anut and Mango , etc. 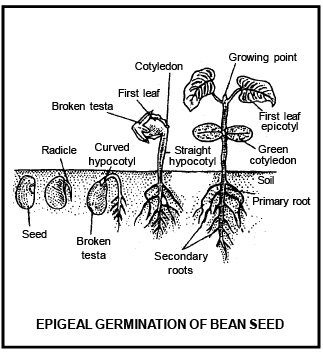 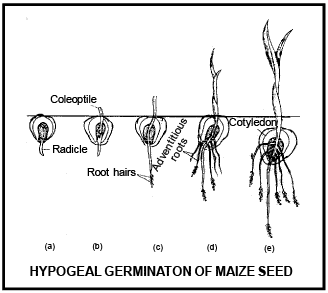 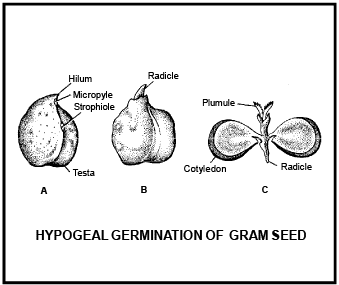 3. Vivipary : It is a special type of seed g ermination which is characteristic of Mangrove vegetation, found in muddy, saline conditions , e.g., Rhizophora, Avicennia, Ceriops, Breguira, Sonneratia, etc. Here there is no resting period of embryo and germination occurs inside the fruit, while it is attached to the parent plant, i.e., "in-situ germination". 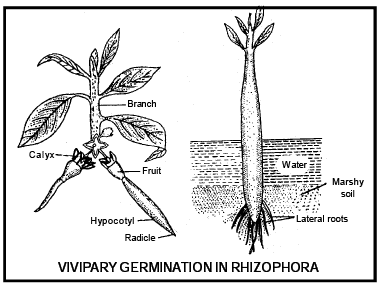 The seedling is separated in the mud with the help of lateral roots developing from basal end of radicle. This is called viviparous g ermination or vivip ary.