The document Reproductive System of Earthworm Notes - Class 11 is a part of Class 11 category.
All you need of Class 11 at this link: Class 11

In which segment male or female is present in earthworms ?
Ref: https://edurev.in/question/648577/In-which-segment-male-or-female-is-present-in-eart

Earthworms are hermaphrodites but they cannot fertilize their own eggs because of their relative position of male and female genital aperture and they are protrandous (i.e. male sex mature earlier than female gametes). So, cross-fertilization takes place. 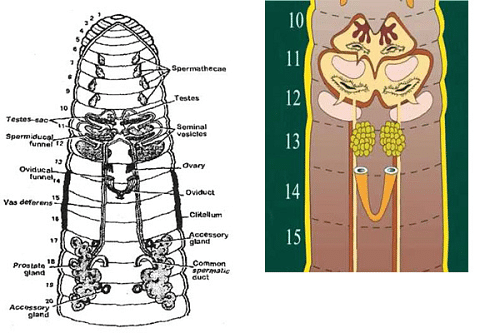 They consist of following parts:

The spermatozoa of one worm are transferred to another during a process called copulation.
OR, the process of transformation of sperms of one worm to another worm for the cross-fertilization is called copulation.
Copulation takes place during rainy season (from July to October) at night or early in the morning (dawn in the morning before sunrise).
During copulation two earthworms come closer and are ventrally attached in opposite direction in such a way that the male genital pore of one worm lie opposite to the spermathecal pore of other.
Both worms remain united together by the secretion of accessory glands and also by mutual penetration of setae in each other’s body.
Sperm and prostatic fluid of each worm are exchanged and released or stored in spermathecae through spermathecal pore.
Copulation lasts for about an hour.
Then the worm separate and later (after some day) they lay their eggs in cocoon.

The girdle soon harden on exposure to the air, into a tough but elastic tube which is called cocoon or egg capsule.
Then the worm starts to wriggle behind so that the girdle slipped forward. As the girdle pass over the female genital pore, it receives ova and when it passes over spermathecal, it receives sperm through spermathecal pores.
Finally, the girdle is thrown off from the anterior end and soon the elasticity of its wall closes up two ends to form a cocoon or ootheca.
Several cocoon are formed after each copulation because the spermatozoa in spermathecae do not pass out all at one time.
The cocoon are barrel shaped, light yellow in color and measuring about 2-2.5µm in length and 2.5-2µm in diameter.

Fertilization takes place inside the cocoon, where each ovum is fertilized by sperm.
As a rule, there is only one embryo develops (only one fertilized egg proceeds to develop new individual and rest degenerate). So the cocoon contains many fertilized eggs but only one earthworm can release from cocoon.

The development is direct i.e. no larval stage. The young worm when fully grown, crawls out of the cocoon in about 2-3 weeks which resembles the adult except in size and absence of clitellum.