The document Resistance and Resistivity Physics Notes | EduRev is a part of the Physics Course Basic Physics for IIT JAM.
All you need of Physics at this link: Physics

For a given shape, the resistance depends on the material of which the object is composed. Different materials offer different resistance to the flow of charge. We define the resistivity ρ of a substance so that the resistance R of an object is directly proportional to ρ. Resistivity ρ is an intrinsic property of a material, independent of its shape or size. The resistance R of a uniform cylinder of length L, of cross-sectional area A, and made of a material with resistivity ρ, is
R = ρL/A
Gives representative values of ρ. The materials listed in the table are separated into categories of conductors, semiconductors, and insulators, based on broad groupings of resistivities. Conductors have the smallest resistivities, and insulators have the largest; semiconductors have intermediate resistivities. Conductors have varying but large free charge densities, whereas most charges in insulators are bound to atoms and are not free to move. Semiconductors are intermediate, having far fewer free charges than conductors, but having properties that make the number of free charges depend strongly on the type and amount of impurities in the semiconductor. These unique properties of semiconductors are put to use in modern electronics, as will be explored in later chapters. 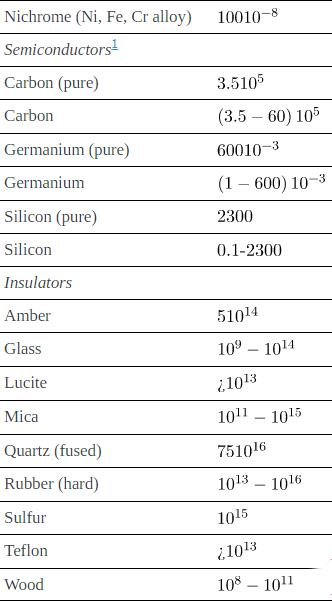 Calculating Resistor Diameter: A Headlight Filament
A car headlight filament is made of tungsten and has a cold resistance of 0.350Ω. If the filament is a cylinder 4.00 cm long (it may be coiled to save space), what is its diameter?
Strategy
We can rearrange the equation R=ρL/A to find the cross-sectional area A of the filament from the given information. Then its diameter can be found by assuming it has a circular cross-section.
Solution
The cross-sectional area, found by rearranging the expression for the resistance of a cylinder given in R = ρL/A, is
A = ρL/R
Substituting the given values, and taking ρ from, yields

The area of a circle is related to its diameter D by
A = πD2/4.
Solving for the diameter D, and substituting the value found for A, gives 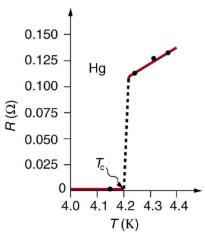 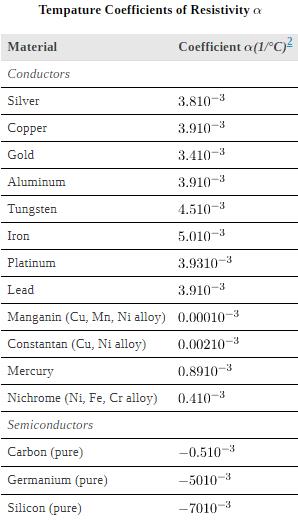 Note also that α is negative for the semiconductors listed in, meaning that their resistivity decreases with increasing temperature. They become better conductors at higher temperature, because increased thermal agitation increases the number of free charges available to carry current. This property of decreasing ρ with temperature is also related to the type and amount of impurities present in the semiconductors.
The resistance of an object also depends on temperature, since RO is directly proportional to ρ. For a cylinder we know R= ρL/A, and so, if L and A do not change greatly with temperature,  R will have the same temperature dependence as  ρ. (Examination of the coefficients of linear expansion shows them to be about two orders of magnitude less than typical temperature coefficients of resistivity, and so the effect of temperature on L and A is about two orders of magnitude less than on ρ.) Thus,

Conceptual Questions
In which of the three semiconducting materials listed in do impurities supply free charges? (Hint: Examine the range of resistivity for each and determine whether the pure semiconductor has the higher or lower conductivity.)
Does the resistance of an object depend on the path current takes through it? Consider, for example, a rectangular bar—is its resistance the same along its length as across its width?
Does current taking two different paths through the same object encounter different resistance?

20C, how long should it be?
2.810-2 m
Find the ratio of the diameter of aluminum to copper wire, if they have the same resistance per unit length (as they might in household wiring).
What current flows through a 2.54-cm-diameter rod of pure silicon that is 20.0 cm long, when 1.00103 V
is applied to it? (Such a rod may be used to make nuclear-particle detectors, for example.)
1.1010-3 A
(a) To what temperature must you raise a copper wire, originally at
20.0C
to double its resistance, neglecting any changes in dimensions? (b) Does this happen in household wiring under ordinary circumstances?
A resistor made of Nichrome wire is used in an application where its resistance cannot change more than 1.00% from its value at 20.0C. Over what temperature range can it be used?
-5C to 45C
Of what material is a resistor made if its resistance is 40.0% greater at 100C than at 20.0C?
An electronic device designed to operate at any temperature in the range from -10.0C to 55.0C contains pure carbon resistors. By what factor does their resistance increase over this range?
1.03
(a) Of what material is a wire made, if it is 25.0 m long with a 0.100 mm diameter and has a resistance of 77.7Ω at 20.0C? (b) What is its resistance at 150C?
Assuming a constant temperature coefficient of resistivity, what is the maximum percent decrease in the resistance of a constantan wire starting at 20.0C?
0.06%
A wire is drawn through a die, stretching it to four times its original length. By what factor does its resistance increase?
A copper wire has a resistance of 0.500Ω at 20.0C, and an iron wire has a resistance of 0.525Ω at the same temperature. At what temperature are their resistances equal?
-17C
(a) Digital medical thermometers determine temperature by measuring the resistance of a semiconductor device called a thermistor (which has α = -0.600/C) when it is at the same temperature as the patient. What is a patient’s temperature if the thermistor’s resistance at that temperature is 82.0% of its value at 37.0C (normal body temperature)? (b) The negative value.
for α may not be maintained for very low temperatures. Discuss why and whether this is the case here. (Hint: Resistance can’t become negative.)
Integrated Concepts
(a) Redo taking into account the thermal expansion of the tungsten filament. You may assume a thermal expansion coefficient of 1210-6/C. (b) By what percentage does your answer differ from that in the example?
(a) 4.7Ω (total)
(b) 3.0% decrease
Unreasonable Results
(a) To what temperature must you raise a resistor made of constantan to double its resistance, assuming a constant temperature coefficient of resistivity? (b) To cut it in half? (c) What is unreasonable about these results? (d) Which assumptions are unreasonable, or which premises are inconsistent?
Footnotes
1 Values depend strongly on amounts and types of impurities
2 Values at 20°C.