We have seen above that in absence of any gradients (or motive forces) a thermodynamic system continues to remain in a state of equilibrium. Obviously, if a disturbance (i.e., mechanical, thermal or chemical potential gradient) is impressed upon such a system it will transit from its initial state of equilibrium. However, as it moves away from its initial state the originally applied gradients will diminish progressively in time, and ultimately when they are reduced to infinitesimal levels the system will attain a new equilibrium state. A question arises here as to the nature of the process of change: if the initially impressed disturbances are reversed in direction (not magnitude) can the system return to its first equilibrium state back through the same intermediate states as it went through during the first phase of change? If that happens we depict the process as reversible, if not, then the process is termed irreversible.  It is necessary to understand the concept of reversibility of thermodynamic process more deeply as it is an idealized form of process of change and without that consideration it is not possible to represent or understand real thermodynamic processes, which are generally irreversible in nature.

What makes a thermodynamic process reversible? To answer the question let us again take the example of the simple gas-in-piston-and-cylinder system as shown in figure 1.5. 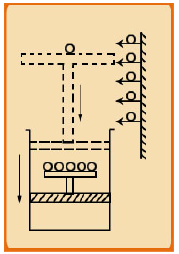 The system initially contains a pure gas whose pressure equals that exerted externally (due to piston weight), and its temperature is the same as that of the environment. Thus it is at equilibrium (say state ‘A’) as there are no mechanical, thermal or chemical concentration gradients in the system. Now a ball of a known weight is transferred on to the piston, whereupon the external pressure exceeds the gas pressure and the piston moves down to attain a new lower position at which point the gas has been compressed and its pressure once again equals that applied externally. At the same time if any differentials in temperature (within or across the system boundary) and internal concentration distribution of the gas molecules result due to the applied mechanical imbalance, heat and mass transfer will take place simultaneously until these gradients are also annulled and the system eventually comes to rest at a new equilibrium point (say, ‘B’). We say that the system has undergone a process due to which its state has changed from A to B. Note that this process can be continued as long as desires by sequentially transferring more and more balls individually onto the piston and impelling the system to change in steps till say the end point state ‘X’. The question that one may pose: is the process A-X reversible?  That is, if one reversed all the initial steps of sequentially moving each ball off the piston so as to reach from state ‘X’ back to ‘A’ would all the interim states of the system as defined by temperature, pressure and volume at any point be identical to those obtained during the process of going from A to X?

To answer this question we need to understand the process occurring in the system a little more deeply. Consider first that a mass m o is suddenly moved onto the piston from a shelf (at the same level). The piston assembly accelerates downwards, reaching its maximum velocity at the point where the downward force on the piston just balanced by the pressure exerted by the gas in the cylinder. However, the initial momentum of the plunging piston would carry it to a somewhat lower level, at which point it reverses direction. If the piston were held in this position of maximum depression brought about by transfer of the mass m 0 , the decrease in its potentialenergy would very nearly equal the work done on the gas during the downward movement. However, if unrestrained, the piston assembly would oscillate, with progressively decreasing amplitude, and would eventually come to rest at a new equilibrium position at a level below its initial position.

The oscillation of the piston assembly cease because it is opposed by the viscosity of the gas, leading to a gradual conversion of the work initially done by the piston into heat, which in turn is converted to internal energy of the gas.

All processes carried out in finite time with real substances are accompanied in some degree by dissipative effects of one kind or another. However, one may conceive of processes that are free of dissipative effects. For the compression process depicted in Fig. 1.4, such effects issue from sudden addition of a finite mass to the piston. The resulting imbalance of forces acting on the piston causes its acceleration, and leads to its subsequent oscillation. The sudden addition of smaller mass increments may reduce but does not eliminate this dissipative effect. Even the addition of an infinitesimal mass leads to piston oscillations of infinitesimal amplitude and a consequent dissipative effect. However, one may conceive of an ideal process in which small mass increments are added one after another at a rate such that the piston movement downwards is continuous, with minute oscillation only at the end of the entire process.

This idealized case derives if one imagines of the masses added to the piston as being infinitesimally small. In such a situation the piston moves down at a uniform but infinitesimally slow rate. Since the disturbance each time is infinitesimal, the system is always infinitesimally displaced from the equilibrium state both internally as well with respect to external surroundings. Such a process which occurs very slowly and with infinitesimal driving forces is called a quasistatic process. To freeze ideas let us assume that the gas in the system follows the ideal gas law. Thus the pressure, temperature and volume at any point during the process are related by eqn. 1.12 (or 1.13). Now imagine that the process of gradual compression is reversed by removing each infinitesimal mass from the piston just as they were added during the forward process. Since during the expansion process also the system will always be differentially removed from equilibrium state at each point, the pressure, temperature and volume will also be governed by the relation 1.12. Since the latter is an equilibrium relationship and hence a unique one, each interim state of the system would exactly converge during both forward and backward progress of system states.  Under such a condition the process of compression is said to be thermodynamically reversible. Both the system and its surroundings are ultimately restored to their initial conditions. In summary, therefore, if both the system and its surroundings can be restored to their respective initial states by reversing the direction of the process, then the process is said to be reversible. If a process does not fulfill this criterion it is called an irreversible process.

It need be emphasized that a reversible process need be a quasi-static process, and that the origin of irreversibility lie in the existence of dissipative forces in real systems, such as viscosity, mechanical friction. These forces degrade useful work irreversibly into heat which is not reconvertible by simply reversing the direction of the process, since during a reverse process a fraction of useful work will again be lost in the form heat in overcoming the dissipative forces. Thus, in the above example system if there were no viscous or frictional forces opposing the motion of the piston the processes of compression and expansion would be reversible, provided of course all changes occur under infinitesimal gradients of force. The argument in the last sentence may be extended to state that if changes are brought about by finite gradients (in this case finite difference in force across the piston, associated with addition of finite mass to the piston), the process would necessarily be irreversible. This is because finite gradients will force the system to traverse through non-equlibrium interim states, during which the pressure, temperature and volume will not be constrained by a unique relationship such as eqn. 1.12, which holds for equilibrium states. Indeed, it would not be possible to define the non-equilibrium states in terms of a single temperature or pressure, as there would be internal gradients of these variables during processes induced by finite force imbalances across the system boundary. These very same considerations would apply for the reverse process of expansion as well, if it occurs under finite mechanical gradients. So in general during such processes it would not be possible to ascribe unique intensive properties to interim states during a change, and hence the forward and reverse “paths” would not coincide as they would if the process occurs under quasi-static conditions.

An additional point that obtains from the above considerations is that only under reversible conditions can one calculate the thermodynamic work by integrating eqn. 1.6, since at all points during the process the variables P, V and T are always uniquely related by the eqn. 1.12. Clearly if the process were occurring under irreversible conditions no such relation would hold and hence the calculation of the thermodynamic work would not be possible through a simple integration of eqn. 1.6.

The foregoing discussion has used the example of a single-phase closed-system, where compression and expansion processes are induced by gradients of mechanical force across the system boundary. There are, however, many processes which are occur due to potential gradients other than mechanical forces. For example, heat flow is induced by temperature differences, electromotive force gradients lead to flow of electricity, and chemical reactions take place as there is a difference between the chemical potential of reactants and products. In general, it may be shown that all such processes brought about by potential gradients of various kinds would tend to reversibility if the gradients are themselves infinitesimal. For example, heat transfer across the boundary of a thermodynamic system would be reversible if the difference across it is of a differential amount ‘dT’, and so on.