In electronics, a signal is an electric current or electromagnetic field used to convey data from one place to another. The simplest form of signal is a direct current (DC) that is switched on and off; this is the principle by which the early telegraph worked. More complex signals consist of an alternating-current (AC) or electromagnetic carrier that contains one or more data streams.

Modulation is the addition of information (or the signal) to an electronic or optical signal carrier. Modulation can be applied to direct current (mainly by turning it on and off), to alternating current, and to optical signals. One can think of blanket waving as a form of modulation used in smoke signal transmission (the carrier being a steady stream of smoke). Morse code, invented for telegraphy and still used in amateur radio, uses a binary (two-state)digital code similar to the code used by modern computers. For most of radio and telecommunication today, the carrier is alternating current (AC) in a given range of frequencies. Common modulation methods include:

Some important classifications of signals

For periodic signals, the power P can be computed using a simpler form based on the periodicity of the signal as

where T here is the period of the signal and t0 is an arbitrary time instant that is chosen to simply the computation of the integration (to reduce the functions you have to integrate over one period).

Classification of Signals into Power and Energy Signals

Comments:1. The square root of the average power

of a power signal is what is usually defined as the RMS value of that signal.2. Your book says that if a signal approaches zero as t approaches then the signal is an energy signal. This is in most cases true but not always as you can verify in part (d) in the following example.3. All periodic signals are power signals (but not all non–periodic signals are energy signals).4. Any signal f that has limited amplitude (| f | < ∞ ) and is time limited (f = 0 for | t | > t0 for some t0 > 0) is an energy signal as in part (g) in the following example.

Exercise 1: determine if the following signals are Energy signals, Power signals, or neither, and evaluate E and P for each signal.

This is a periodic signal, so it must be a power signal. Let us prove it. Notice that the evaluation of the last line in the above equation is infinite because of the first term. The second term has a value between –2 to 2 so it has no effect in the overall value of the energy. 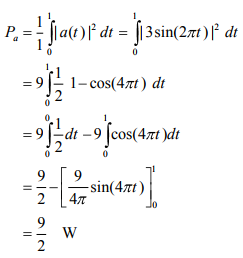 So, the energy of that signal is infinite and its average power is finite (9/2). This means that it is a power signal as expected. Notice that the average power of this signal is as expected (square of the amplitude divided by 2)

Let us first find the total energy of the signal.

The average power of the signal is 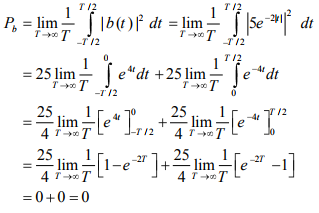 So, the signal b(t) is definitely an energy signal. So, the energy of that signal is infinite and its average power is finite (9/2). This means that it is a power signal as expected. Notice that the average power of this signal is as expected (the square of the amplitude divided by 2) Let us first find the total energy of the signal

So, this signal is NOT an energy signal. However, it is also NOT a power signal since its average power as shown below is zero.

The average power of the signal is Using Le‘hopital‘s rule, we see that the power of the signal is zero. That is

So, not all signals that approach zero as time approaches positive and negative infinite is an energy signal. They may not be power signals either.