(1) The vast array of species of micro-organisms, algae, fungi, plants and animals occurring on the earth either in the terrestrial or aquatic habitats and the ecological complexes of which they are a part.(2) Diversity ranges from macromolecules to biomes.(3) Biodiversity on earth exists in three levels of organization:(i) Genetic diversity(ii) Species diversity(4) Genetic diversity(i) It is related to the variations of genes within species.(ii) The variations may be in different variants of same genes (alleles), in entire genes or in chromosomal structures.(ii) Greater the genetic diversity among organisms of a species, more sustenance it has against environmental perturbations.(iii) Genetically uniform populations are highly prone to diseases.(5) Species diversity(i) it is related to the variety of species within a region.(ii) Species richness refers to the number of species per unit area.(iii) Species Evenness refers to the relative abundance with which each species is represented in an area.Biodiversity in India(1) Out of the twelve mega biodiversity counties, India is one.(2) India has 10 biogeographical regions, 89 national parks, 500 wild life sanctuaries, 14 biosphere reserves, 6 westlands and 35 world heritage sites.(3) There are about 45,000 species of plants and about 90,000-1,00,000 species of animals. 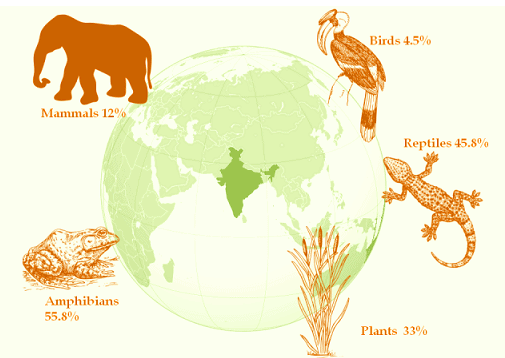 Patterns of Biodiversity(1) Biodiversity changes with change in latitude or altitude.(2) It is minimum at the poles and maximum near or at equator. Similarly, as one moves down from higher to lower altitudes, biodiversity is increased.Loss of bio-diversity:(1) Caused by three factors - Population, Urbanisation and Industrialisation.(2) The colonisation of tropical Pacific Islands by human has led to the extinction of more than 2000 species of native birds.(3) Loss of bio-diversity in a region leads to:(i) decrease in plant production.(ii) less resistance to environmental disturbances such as droughts.(iii) increase in variability in ecosystem processes like plant productivity, water use, pest and disease cycles etc.Biodiversity ConservationIn situ conservation(1) The most appropriate method to maintain species of wild animals and plants in their natural habitats. This approach includes conservation and protection of the total ecosystems and its biodiversity through a network of protected areas.(2) The common natural habitats (protected areas) that have been set for in-situ conservation of wild animals and plants include:(i) National parks(ii) Wild life sanctuaries(iii) Biosphere reserves(iv) Several wetlands, mangroves and coral reefs.(v) Sacred grooves and lakes.(3) Hot spot of biodiversity are those regions of rich biodiversity which have been declared sensitive due to direct or indirect interference of human activities.(4) There are 25 terrestrial hot spots in the world including two from India.Ex situ conservation (1) Threatened animals and plants are taken out from their natural habitat and placed in special setting where they can be protected and given special care.(2) Ex situ conservation includes the following:(i) Sacred plants and home gardens(ii) Seed banks, field gene banks, cryopreservation.(iii) Botanical gardens, Arborata, Zoological gardens, Aquaria.Convention on Biodiversity:(1) “The earth Summit” held in Rio de Jeneiro in 1992 called upon all nations to take appropriate measures for conservation of biodiversity and sustainable utilization of its benefits.(2) Second international Conference on Sustainable development held in 2002 in Johannesburg, South Africa, 190 countries pledged their commitment to achieve by 2010 a significant reduction in the current rate of biodiversity loss at global, regional and local level.