The document NEET Notes | EduRev is a part of the NEET Course NEET Revision Notes.
All you need of NEET at this link: NEET

Exceptions to the Octet Rule:

(ii) Carbon-oxygen bond lengths in carboxylate ion are equal due to resonance.

(i) Formation of gaseous cations

(iii) Packing of ions of opposite charges to form ionic solids

Use the following chart to find the shape.

Fajan's Rule:
It accounts for the covalent character in ionic compounds.
Covalency is favoured by

• σ-Bond : When covalent bond is formed by overlapping of atomic orbitals along the same axis it is called s - bond. Such type of bond is symmetrical about the line joining the two nuclei e.g.

π - Bond: This type of bond is formed by the sidewise or lateral overlapping of two half filled atomic orbitals.

The strength of a bond depends upon the extent of overlapping of half-filled atomic orbitals. The extent of overlapping is between two atoms is always greater when there is end to end overlapping of orbitals than, when there is sidewise overlapping of oritals. Hence s-bond is always stronger than p-bond.The average distance between the nuclei of the two bonded atoms in a molecule is called bond length and the energy required to break one mole of bonds of particular type in gaseous state is called Bond energy or Bond strength. The same amount of energy is released information of one mol of particular bond. sp2 hybridization: In this case one s and two p orbitals mix together to form three sp2 hybrid orbitals and are oriented in a trigonal planar geometry. The remaining p orbital if required form side ways overlapping with the other unhybridized p orbital of other C atom and leads to formation of p2C = CH2 bond as in Hsp hybridization: In this case, one s and one p orbital mix together to form two sp hybrid orbitals and are oriented in a linear shape. 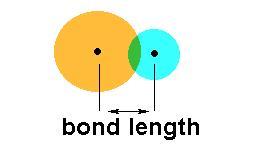 Bond Angel:Bond angel is the angle between two adjacent bonds at an atom in a molecule made up of three or more atoms. Bond angles mainly depend on the following three factors: