Properties of hormones(a) These are secreted by endocrine gland (biogenic in origin).(b) Their secretions is released directly into blood (except local hormones e.g. gastrin).(c) These are carried to distantly locate specific organs, called target organ.(d) These have specific physiological action (excitatory or inhibatory). These co-ordinate different physical, mental and metabolic activities and maintain homeostasis.(e) The hormones have low molecular weight e.g. ADH has a molecular weight of 600–2000 daltons.(f) These act in very low concentration e.g. around 10–10 molar.(g) Hormones are non antigenic.(h) These are mostly short-lived. So have a no camulative effect.(i) Some hormones are quick acting e.g. adrenalin, while some acting slowly e.g. ostrogen of ovary.(j) Some hormones secreted in inactive form called Prohormone e.g. Pro-insulin.(k) Hormones are specific. They are carriers of specific information to their specific target organ. Only those target cell respond to a particular hormone for which they have receptors.Origin of different endocrine glands Pituitary Gland (Hypophysis)(1) Pituitory is known as hypophysis cerebri, its name pituitary was given by vesalius.(2) Muller’s gland of amphioxus and subneural gland of hardmania is homologous to pituitary of vertebrates. Parts and component(1) Adenohypophysis (Anterior lobe)(i) Pars distalis(ii) Pars tuberalis              (iii) Pars intermedia(2) Neurohypophysis (Posterior lobe)(i) Pars nervosa        (ii) Infundibulum              Hypothalamus   (i) Position and Structure: Hypothalamus is the floor of diencephalon. It is formed of masses of grey matter, called hypothalmic nuclei, containing neurosecretory cells. It is connected with anterior pituitary lobe by blood capillaries of hypophyseal portal system and with the posterior pituitary lobe by axons of its neurons, both passing through the pituitary stalk.(ii) Hormones of hypothalamus: Neurosecretory cells of hypothalamus secrete neurohormones called releasing factors (RF) or inhibiting factors (IF). These neurohormones are carried by hypophyseal portal system to adenohypophysis (primary target organ) and stimulate or inhibit the release of trophic hormones from adenohypophysis. These neurohormones are proteinous in nature and formed of 3 – 20 amino acids.Neurohormones of Adenohypophysis 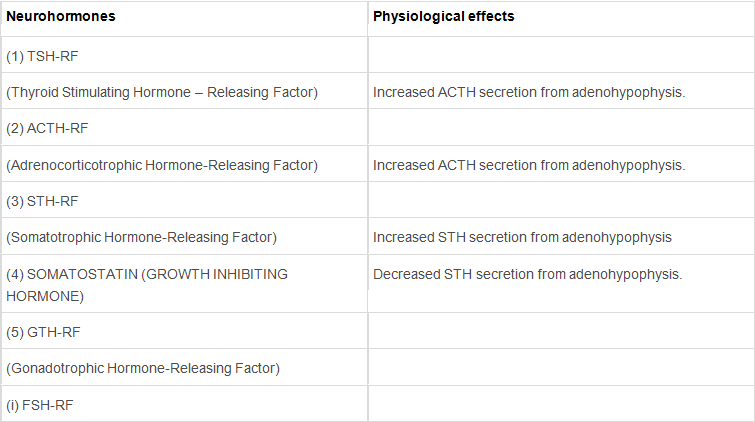 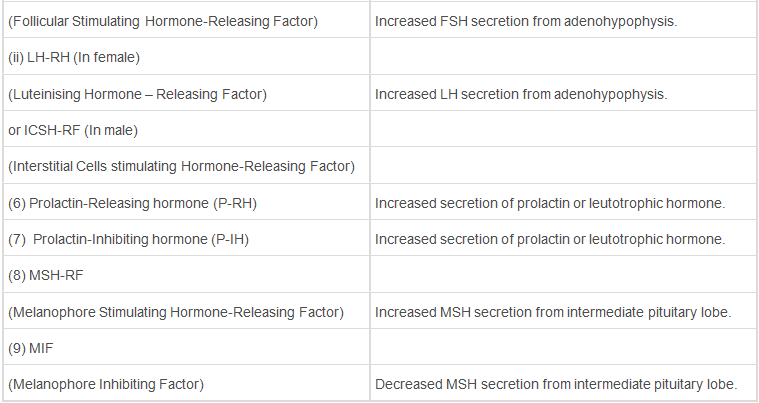 Thyroid gland(1) The name "thyroid" was introduced by Thomas Wharton (1656).(2) It is derived from Greek "Thyreos" a shield.(3) Location: This is the largest endocrine gland of our body. It is located in our neck upon the ventral aspect of larynx (sound box or Adam's apple) and a few anterior most tracheal rings. It is a dark brown and H-shaped bilobed gland.(4) Hormones of thyroid:Thyroid gland secretes two iodinated hormones.(a) Thyroxine: It is an iodine containing (6% iodine) amine hormone which is derived from tyrosine amino acid. Chemically thyroxine is tetraidothyronine though also found as tri-iodothyronine. Secretion of thyroxine is inversely proportional to the blood level of thyroxine (feedback mechanism).(b) Thyrocalcitonin (TCT): It is a long peptide hormone secreted by parafollicular by cells of thyroid gland (C-cells). It secretion is regulated by increased plasma level of calcium by feedback mechanism.(5) Irregularities of thyroid gland(a) Hypothyroidism: (Decreased section of thyroxine from thyroid gland).(b) Hypersecretion of thyroid hormones (Hyperthyroidism or thyrotoxicosis): This may also be a genetic defect, but usually it is provided by chronic infections (influenza, rheumatism, tonsilitis, tuberculosis, measles, whooping cough, etc.) pregnancy, intake of large doses of iodine, over-eating, etc. It results into a considerable increase in glucose and oxygen consumption by cells and the rate of oxidative metabolism in the mitochondria.Parathyroid gland (1) Hormones of parathyroid: Active hormone secreted by parathyroids is parathormone (PTH), also called Collip's Hormone (Phillips collip, 1925).(2) Irregularities of parathormones(a) Hypoparathyroidism (Hyposecretion of parathormone)(b) Hyperparathyroidism (Hypersecretion of parathormone)Pancreas(1) Hormones of pancreas and their role:(a) Insulin: Insulin regulates how the body uses and stores glucose and fat.Difference between diabetes mellitus and diabetes insipedus

(b) Glucagon: This is secreted by the alpha cells of islets of Langerhans. Its function is to elevate glucose level in blood when glucose is deficient.(c) Somatostatin and Pancreatic polypeptide: Modern physiologists have postulated that the d and F (PP) cells of pancreas respectively secrete somatostatin (SS) and pancreatic polypeptide (PP). Somatostatin resembles the growth hormone inhibitory hormone (GHIH) secreted by hypothalamus.Thymus gland(1) Function of thymus glands(a) Thymus is haemopoietic, as well as, an endocrine gland.(b) The major function of thymus is to secrete thymosin hormone, thymic humoral factor (THF), thymic factor (TF), thymopoietin.(c) Thymus is essential in neonatal (newly born) infant and postnatal child for normal development of lymphoid organs and cellular immunity.Gonads (1) The gonads are the sex glands, the testes and the ovary.(i) TestesThe testis form part of the male reproductive system, and is the gland where sperm and testosterone are produced.Functions of Testes(a) It stimulates the male reproductive system to grow to full size and become functional.(b) It stimulates the formation of sperms (spermatogenesis) in the seminiferous tubules.(c) It also determines the male sexual behaviour sex urge, aggressive behaviour.  (d) Under its effect protein anabolism increases.(ii) Ovary:The ovary is a ductless reproductive gland in which the female reproductive cells are produced.List of hormones their chemical nature and functions