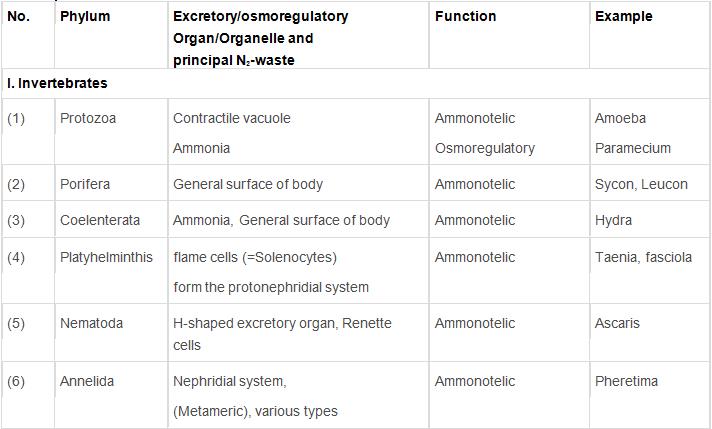 Excretory system of manMammalian (human) urinary system consists of a pair of kidneys, a pair of ureter, a urinary bladder and a urethra.(i) Kidneys: The kidneys are dark-red, bean-shaped organs about 11 cm long, 5 cm wide and 3 cm thick, each weight about 150 gm in an adult male and about 135 gm in adult female. Differences between cortical and Juxtamedullary nephrons

(ii) Ureters: From the hilum of each kidney emerges a whitish tube the ureter. The ureters are about 28 cm long. Their wall consists of transitional epithelium surrounded by a layer of muscle fibres. Openings of the two ureters in the bladder are separate, but closely placed. These are oblique, so that the urine cannot regurgitate into the ureters when the bladder contracts. Peristalsis of ureters also cheeks regurgitation of urine.(iii) Urinary bladder and Urethra: The urinary bladder is pear-shaped which is made up of smooth and involuntary muscles. The muscles are also known as detrusor muscles (muscles that has the action of expelling a substance). The lower part or neck of the bladder leads into the urethra.Differences between male and female urethra

Physiology of ExcretionMajor nitrogenous excretory substance in frog, rabbit and human is urea, i.e. these are ureotelic animals. The excretory physiology in these animals may be considered under two phases, viz urea synthesis and formation and excretion of urine. Urine constituents in man (in %)

Differences between Rennin and Renin

(i) Waste products of protein metabolism(a) Amino acids: These are end products of protein digestion absorbed into the blood from small intestine. Certain invertebrates, like some molluscs (eg Unio, Limnae, etc.) and some echinoderms (eg Asterias) excrete excess amino acids as such. This is called aminotelic excretion or aminotelism.(b) Ammonia: In most animals, excess amino acids are deaminated, i.e. degraded into their keto and ammonia groups. The keto groups are used in catabolism for producing ATP, whereas ammonia is excreted as such or in other forms.(c) Urea: This is less toxic and less soluble in water than ammonia. Hence, it can stay for some time in the body.(d) Uric acid: Animals living in dry (arid) conditions, such as land gastropods, most insects, land reptiles (snakes and lizards), birds etc have to conserve water in their bodies.(f) Guanine: Spiders typically excrete their ammonia in the form of guanine. Some guanine is also formed in amphibians, reptiles, birds and earthworms. It is insoluble in water. Hence, no water is required for its excretion.Differences between ammonotelism, ureotelism and uricotelism 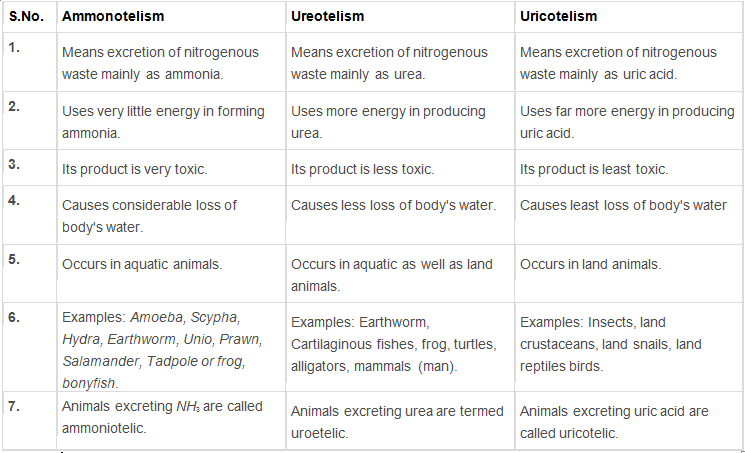