TYPES OF ORESOres may be divided into four groups

Metallurgy:It is the process of extracting a metal from its ores. The following operations are carried out for obtaining the metal in the pure form.

CONCENTRATIONPhysical MethodGravity separation: The powdered ores is agitated with water or washed with a running stream of water. The heavy ore particles of sand, clay etc. are washed away.Froth Floatation Process: The finely divided ore is introduced into water containing small quantity of oil (e.g. Pine Oil). The mixture is agitated violently with air a froth is formed which carries away along with it the metallic particles on account of the surface tension forces. The froth is transferred to another bath where gangue-free ore settles down. 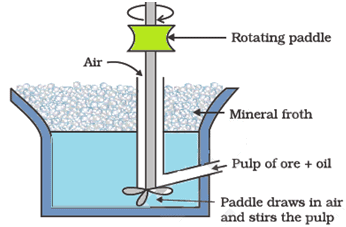 Electro Magnetic Separator: A magnetic separator consists of a belt moving over two rollers, one of which is magnetic. The powdered ore is dropped on the belt at the other end. Magnetic portion of the ore is attracted by the magnetic roller and falls near to the roller while the non-magnetic impurity falls farther off CHEMICAL METHODSCalcination: Carbonate or hydrated oxide ores are subjected to the action of heat in order of expel water from hydrated oxide and carbon dioxide from a carbonate.Examples:

Roasting: Sulphide ores either are subjected to the action of heat and air at temperatures below their melting points in order to bring about chemical changes in them.Examples:

Leaching: It involves the treatment of the ore with a suitable reagent as to make it soluble while impurities remain insoluble. The ore is recovered from the solution by suitable chemical method.    Al2O3 + 2NaOH → 2 NaAlO2 + H2OREDUCTION OF FREE METALSmelting: Reduction of a metal from its ore by a process involving meltingSeveral reducing agents such as sodium, magnesium and aluminium are used for reduction.The calcinated or roasted ore is mixed with carbon (coal or coke) and heated in a reverberatory or a blast furnace.Carbon and carbon monoxide produced by incomplete combustion of carbon reduce the oxide to the metal.

REFININGThe metals obtained by the application of above reduction methods from the concentration ores are usually impure. The impure metal is thus subjected to some purifying process known as refining in order to remove undesired impurities. Various process for this are The addition of cryolite (Na3AlF6) and fluorspar (CaF2) makes alumina a good conductor of electricity and lowers its Fusion temperature from 2323 to 1140 K. the reaction taking place during electrolysis. Hydrometallurgy (solvent extraction)Solvent extraction is the latest separation technique and has become popular because of its elegance, simplicity and speed. The method is based on preferential solubility principles.Solvent or liquid-liquid extraction is based on the principle that a solute can distribute itself in a certain ratio between two immiscible solvents, one of which is usually water and the other an organic solvent such as benzene, carbon tetrachloride or chloroform. In certain cases, the solute can be more or less completely transferred into the organic phase.EXTRACTION OF IRONImportant Ores of Iron:Hematite Fe2O3 (red oxide of iron)Limonite Fe2O3×3H2O (hydrated oxide of iron)Magnetite Fe3O4 (magnetic oxide of iron) EXTRACTION OF COPPEROres of Copper: REFINING OF METALSZone refining (Fractional crystallization): This method is employed for preparing extremely pure metals. This method is based upon the principle that when a molten solution of the impure metal is allowed to cool, the pure metal crystalises out while the impurities remain in the melt.

Electro-refining: In this method, the impure metal is converted into a block which forms the anode while cathode is a rod or plate of pure metal. These electrodes are suspended in an electrolyte which is the solution of a soluble salt of the metal usually a double salt of the metal. When electric current is passed, metal ions from the electrolyte are deposited at the cathode in the form of pure metal while an equivalent amount of metal dissolves from the anode and goes into the electrolyte solution as metal ion. The soluble impurities present in the crude metal anode go into the solution while the insoluble impurities settle down below the anode as anode mud.

Cupellation and Poling are used for refining of metals, cupellation is contain impurities of other metals with traces of lead are removed from silver by heating impure silver with a blast of air in a cupel (an oval shaped pan made up of bone ash) in which lead is oxidised to lead oxide (PbO) which being volatile escapes leaving behind pure silver. Poling is used for refining of such metals which contain impurities of its own oxide. In this process, the molten impure metal is stored with green wooden poles. At the high temperature of the molten metal, wood liberates methane which reduces the oxide of the metal to free metal.