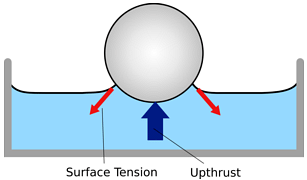 Surface tension is the property of a liquid by virtue of which its free surface behaves like a stretched membrane and supports, comparatively heavier objects placed over it. It is measured in terms of force of surface tension.

Force of surface tension: It is defined as the amount of force acting per unit length on either side of an imaginary line drawn over the liquid surface.(a) T = Force/length = F/l(b) T = Surface energy/Surface area = W/AUnits: S.I – Nm-1C.G.S- dyn cm-1

Surface energy: Potential energy per unit area of the surface is called surface energy.(a) Expansion under isothermal condition: To do work against forces of surface tension:-W= T × A    (Here A is the total increase in surface area)To supply energy for maintaining the temperature of the film:-E = T + H(b) Expansion under adiabatic conditions:E = TForce of surface tension is numerically equal to the surface energy under adiabatic conditions.DROPS AND BUBBLES(a) Drop: Area of surface film of a spherical drop of radius R is given by, A = 4πR2(b) Bubble: The surface area of the surface films of a bubble of radius R is, A = 2×4πR2 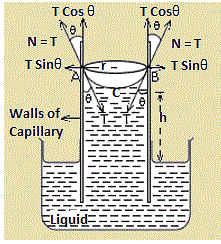 Capillarity is the phenomenon, by virtue of which the level of liquid in a capillary tube is different from that outside it, is called capillarity.Weight of liquid, W = Vρg = πr2[h+(r/3)]ρg    (Here r is the radius meniscus)If weight of meniscus is taken into account, the force of surface tension will be,T = [r(h+(r/3)) ρg]/2 cosθFor fine capillary, force of surface tension, T = rhρg/2 cosθSo height, h = 2T cosθ/ rρgThis signifies, height of liquid risen (or depressed) in a capillary tube varies inversely as the radius of tube. Smaller the diameter of capillary tube, greater is the rise of liquid in it.

Tube of insufficient lengthRh = 2T/ρgAs, T, ρ and g are all constant, Rh = ConstantSmaller the value of h, greater will be the value of R. But liquid will never flow.

Effect of densityDensity of liquid also affects its surface tension. Surface tension of a liquid is given by,T = A (ρ - ρ')nHere, ρ is the density of liquid, ρ' is the density of saturated vapors of liquid and A is the constant depending on the nature of liquid.Pressure difference across a liquid surface(a) Plane surface: There is no difference of pressure on the two sides of the film.(b) Convex surface: Pressure below the surface film must be greater than that just above it.(c) Concave surface: Pressure on the upper side is greater than that just below it.General formula for excess pressurePexcess =T[1/R1 + 1/R2]