Types of Bones and their Description 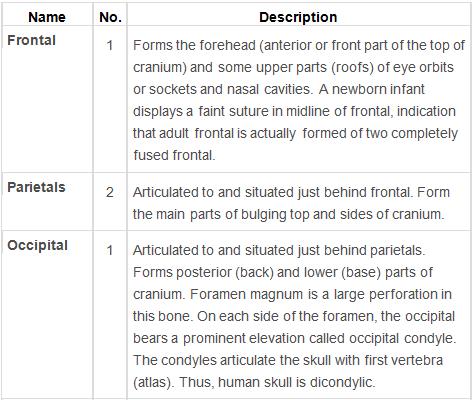 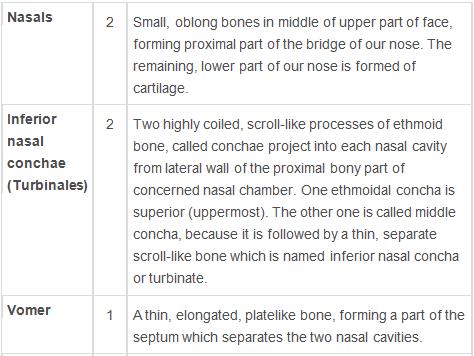 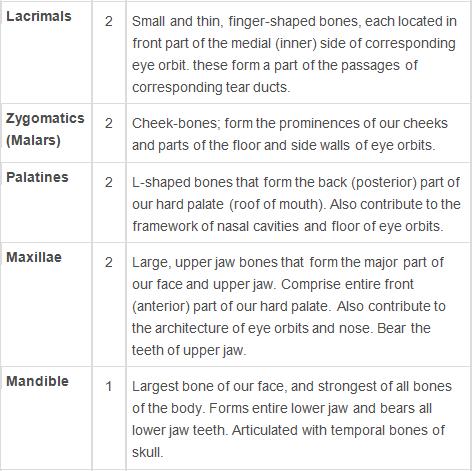 Important Tips(1) Exoccipital and sphenethmoid bones are cartilaginous, sphenethmoid is unpaired bone.(2) Pterygoid is the Y-shaped bone.(3) Zygomatic arch is found in upper jaw and formed by maxilla, squamosal and jugal.(4) The bones common to face and cranium are frontal.(5) Turbinal bones are present in the nasal passage.(6) Dermatocranium of skull comprises of membranous bone.(7) Turbinals bones are present in the nasal passage and increase the sensory surface of olfactory chambers.(8) Tympanic bulla enclosing the tympanus in mammal.(9) Coronoid process is a part of lower jaw in mammalian skull.(10) Lacrimal bone is situated infront of the eye orbit close to the frontal bone.(11) Mastoid bone is found in auditory region.(12) Frontoparietal is the membranous bone in frog.(13) Anterior cornua of the hyoid apparatus of frog articulate with auditory capsule.(14) Hyoid apparatus of frog is situated in the floor of pharynx.(15) Sella turcica is found in base-sphenoid bone. It is a depression in skull which lodges the pituitary body.(16) Amphibian & mammalia has dicondylic skull and reptiles, birds has monocondylic skull.(17) Alar process is a part of hyoid apparatus.(18) The hyoid apparatus of frog is entirely cartilaginous except posterior cornua.(19) Septum axillary in the paired bone in frog.(20) Pterygoid and palatines are paired bones on ventral side of skull of frog.(21) Hammer shaped bone in skull of frog is squamosal.(22) Pterygoid is membranous bone in frog skull.(23) Frog has no basisphenoid bone.(24) Vomer is paired dorsal bone in frog skull.

Difference between Thoracic and Lumbar vertebra

Difference between Male and Female pelvis

From excitation to contraction to relaxation, following occurs within a skeletal muscle:(1) An electrical signal (action potential) travels down a nerve cell. This in turn causes to release a chemical message (neurotransmitter). This chemical message is released into a small gap between the nerve cell and muscle cell. This gap is called synapse.(2) The neurotransmitter then crosses the gap. It binds to a protein (receptor) on the muscle-cell membrane which causes an action potential in the muscle cell.(3) The action potential spreads along the muscle cell.(4) The action potential enters the cell through T-tubule.(5) The action potential opens gate in the muscle's calcium store.(6) Calcium ions flow into the cytoplasm.(7) Calcium ions bind to troponin-tropomyosin molecules. These are located in the grooves of the actin filaments.(8) The sites on actin where myosin can form crossbridges are covered by the rod-like tropomyosin molecule.(9) On binding calcium ions, troponin changes shape. It then slides tropomyosin out of the groove, exposing the actin-myosin binding sites.(10) Myosin interacts with actin by cycling crossbridges. The muscle thereby creates force, and shortens.(11) After the action potential has passed, the calcium gates close automatically.(12) Calcium pumps remove calcium from the cytoplasm. These pumps are located on the sarcoplasmic reticulum.(13) As the calcium gets pumped back into the sarcoplasmic reticulum, calcium ions come off the troponin.(14) The troponin returns to its normal shape.(15) Troponin allows tropomyosin to cover the actin-myosin binding sites on the actin filament.(16) As no binding sites are available now, hence no crossbridges can form, and the muscle relaxes.

Note:-(1) The activities of muscle contraction and relaxation require energy.(2) Muscles use energy in the form of ATP. The energy from ATP is used to reset the myosin crossbridge head and release the actin filament.(3) In order to make ATP, the muscles do the following:(a) Breaks down creatine phosphate.(b) add phosphate to ADP to create ATP.(c) Carry out anaerobic respiration, by which glucose is broken down to lactic acid and ATP is formed.(d) Carry out aerobic respiration. Due to which glucose, glycogen, fats and amino acids are broken down in the presence of oxygen to produce ATP.