(1) Macronutrients (Macroelements or major elements): Nutrients which are required by plants in larger amounts (Generally present in the plant tissues in concentrations of 1 to 10 mg per gram of dry matter).(2) The macronutrients include carbon, hydrogen, oxygen, nitrogen, phosphorous, sulphur, potassium, calcium, magnesium.(3) Micronutrients (Microelements or minor elements or trace elements): Nutrients which are required by plants in very small amounts, i.e., in traces (equal to or less than 0.1 mg per gram dry matter).(4) The micronutrients include iron, manganese, copper, molybdenum, zinc, boron and chlorine. Recent research has shown that some elements, such as cobalt, vanadium and nickel, may be essential for certain plants.(5) The usual concentration of essential elements in higher plants according to D.W. Rains (1976) based on the data of Stout are as follows: 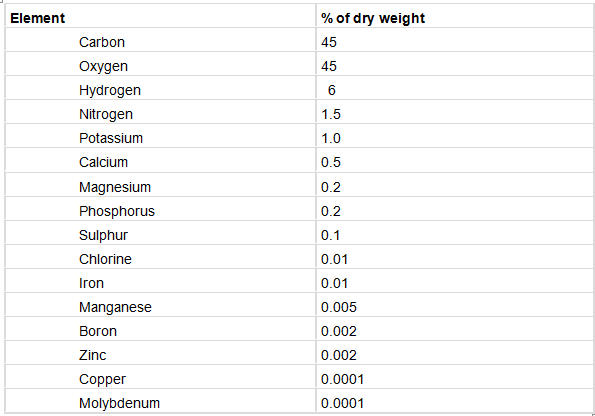 Major Role of NutrientsVarious elements perform the following major role in the plants:(1) Construction of the plant body: The elements particularly C, H and O construct the plant body by entering into the constitution of cell wall and protoplasm. They are, therefore, referred to as frame work elements. Besides, these (C, H and O) N, P and S also enter in the constitution of protoplasm. They are described as protoplasmic elements.(2) Maintenance of osmotic pressure: Various minerals present in the cell sap in organic or inorganic form maintain the osmotic pressure of the cell.(3) Maintenance of permeability of cytomembranes: The minerals, particularly Ca++, K+ and Na+ maintain the permeability of cytomembranes.(4) Influence the pH of the cell sap: Different cations and anions influence on the pH of the cell sap.(5) Catalysis of biochemical reaction: Several elements particularly Fe, Ca, Mg, Mn, Zn, Cu, Cl act as metallic catalyst in biochemical reactions.(6) Toxic effects: Minerals like Cu, As, etc. impart toxic effect on the protoplasm under specific conditions.(7) Balancing function: Some minerals or their salts act against the harmful effect of the other nutrients, thus balancing each other.Specific Role of MacronutrientsThe role of different elements is described below:(1) Carbon, hydrogen and oxygen: These three elements though cannot be categorized as mineral elements, are indispensible for plant growth. These are also called 'framework elements'. 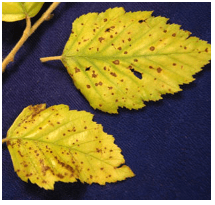 (2) Nitrogen: Nitrogen is an essential constituent of proteins, nucleic acids, vitamins and many other organic molecules as chlorophyll. Nitrogen is also present in various hormones, coenzymes and ATP etc.(i) Deficiency symptoms: The symptoms of nitrogen deficiency are as follows:(a) Impaired growth(b) Yellowing of leaves due to loss of chlorophyll, i.e., chlorosis.(c) Development of anthocyanin pigmentation in veins, sometimes in petioles and stems.(d) Delayed or complete suppression of flowering and fruiting.(3) Phosphorus 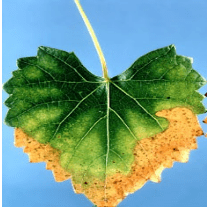 (a) Phosphorous is present abundantly in the growing and storage organs such as fruits and seeds. It promotes healthy root growth and fruit ripening by helping translocation of carbohydrates.(i) Deficiency symptoms(a) Leaves become dark green or purplish.(b) Sometimes development of anthocyanin pigmentation occurs in veins which may become necrotic (Necrosis is defined as localised death of cells).(c) Premature fall of leaves.(4) Sulphur(i) Functions(a) Sulphur is a constituent of amino-acids like cystine, cysteine and methionine; vitamins like biotin and thiamine, and coenzyme A.(ii) Deficiency symptoms(b) Leaf tips and margins roll downwards and inwards e.g., tobacco, tea and tomato.(c) Premature leaf fall.(d) Delayed flowering and fruiting.(5) Potassium(i) Functions(a) It differs from all other macronutrients in not being a constituent of any metabolically important compound.(b) It is the only monovalent cation essential for the plants.(c) It acts as an activator of several enzymes including DNA polymerase.(ii) Deficiency symptoms(a) Mottled chlorosis followed by the development of necrotic areas at the tips and margins of the leaves.(b) K+ deficiency inhibits proteins synthesis and photosynthesis. At the same time, it increases the rate of respiration.(c) The internodes become shorter and root system is adversely affected.(6) Calcium 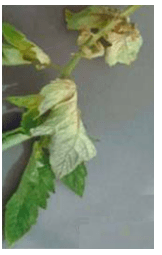 (i) Functions(a) It is necessary for formation of middle lamella of plants where it occurs as calcium pectate.(b) It is necessary for the growth of apical meristem and root hair formation.(c) It acts as activator of several enzymes, e.g., ATPase, succinic dehydrogenase, adenylate kinase, etc.(ii) Deficiency symptoms(a) Ultimate death of meristems which are found in shoot, leaf and root tips.(b) Chlorosis along the margins of young leaves, later on they become necrotic.(c) Distortion in leaf shape.(7) Magnesium 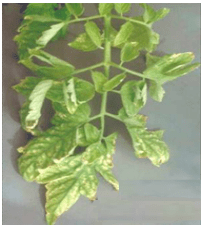 (i) Functions(a) It is an important constituent of chlorophyll.(b) It is present in the middle lamella in the form of magnesium pectate.(c) It plays an important role in the metabolism of carbohydrates, lipids and phosphorus.(ii) Deficiency symptoms(a) Interveinal chlorosis followed by anthocyanin pigmentation, eventually necrotic spots appears on the leaves. As magnesium is easily transported within the plant body, the deficiency symptoms first appear in the mature leaves followed by the younger leaves at a later stage.(b) Stems become hard and woody, and turn yellowish green.(c) Depression of internal phloem and extensive development of chlorenchyma.Specific Role of Micronutrients(1) Iron 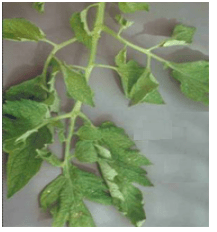 (i) Functions(a) It acts as activator of enzymes of respiration (malic dehydrogenase and oxalosuccinic decarboxylase) and nitrogen metabolism (nitrite reductase).(b) It is essential for the synthesis of chlorophyll.(c) It is required in photosynthesis during photolysis of water.(ii) Deficiency symptoms:(a) Chlorosis (interveinal) and necrosis of leaves.(b) Chloroplasts lose chlorophyll, turn yellow green, vacuolated and finally perish.(c) Root system is poorly developed.(d) Formation of grains is badly affected.(3) Copper(i) Functions  (a) It activates many enzymes and is a component of phenolases, ascorbic acid oxidase, tyrosinase, cytochrome oxidase.(b) Copper is a constituent of plastocyanin, hence plays a role in photo-phosphorylation.(c) It also maintains carbohydrate nitrogen balance.(ii) Deficiency symptoms(a) Both vegetative and reproductive growth are reduced.(b) The most common symptoms of copper deficiency include a disease of fruit trees called 'exanthema' in which trees start yielding gums on bark and 'reclamation of crop plants', found in cereals and legumes.(c) It also causes necrosis of the tip of the young leaves (e.g., Citrus). The disease is called 'die back'.(4) Molybdenum(i) Functions(a) Its most important function is in nitrogen fixation because it is an activator of nitrate reductase.(b) It is required for the synthesis of ascorbic acid.(c) It acts as activator of some dehydrogenases and phosphatases.(ii) Deficiency symptoms(a) Mottled chlorosis is caused in the older leaves as in nitrogen deficiency, but unlike nitrogen-deficient plants, the cotyledons stay healthy and green.(b) It is also known to inhibit flowering, if they develop, they fall before fruit setting.(c) It leads to drop in concentration of ascorbic acid.(5) Zinc(i) Functions(a) It is required for the synthesis of tryptophan which is a precursor of indole acetic acid-an auxin.(b) It is a constituent of enzymes like carbonic anhydrase, hexokinase, alcohol dehydroge-nase, lactic dehydrogenase and carboxypeptidase.(c) It is required for metabolism of phosphorus and carbohydrates.(6) Boron(i) Functions(a) It facilitates the translocation of sugars.(b) It is involved in the formation of pectin.(c) It is also required for flowering, fruiting, and photosynthesis and nitrogen metabolism.(7) Chlorine(i) Functions(a) It is required for photolysis of water during photosynthesis in photosystem-II.(b) In tobacco, it increases water volume inside the cell and also regulates carbohydrate metabolism.(c) With Na+ and K+, chlorine helps in determining solute concentration and anion cation balance in the cells.