Self refers to the totality of an individuals conscious experiences, ideas thoughts and feelings with regard to her self or him self.

Self refers to the totality of an individual’s conscious experiences, ideas, thoughts and feelings with regard to himself or herself.

• Self-efficacy is the extent to which a person believes they themselves control their life outcomes or the outcomes are controlled by luck or fate or other situational factors.

• Self-regulation refers to the ability to organize and monitor one’s own behaviour.

Shifting nature of boundary between self and other (individual self and social self).Does not clear dichotomies.Collectivistic culture: Self is generally not separated from one’s own group; rather both remain in a state of harmonious co-existence.

Boundary is relatively fixed.Holds clear dichotomies between self and other, man and nature, subjective and objective.Individualistic Culture: Self and the group exist as two different entities with clearly defined boundaries; individual members of the group maintain their individuality.

• Personality refers to unique and relatively stable qualities that characterized an individual’s behaviour across different situation over a period of time.

(i) Proposed a typology of personality based on fluid or humour.(ii) Classified people into four types (i.e., sanguine, phlegmatic, melancholic and choleric); characterised by specific behavioural features.

(i) Classifies people into the categories of vata, pitta and kapha on the basis of three humoural elements called tridosha.(ii) Each refers to a type of temperament, called prakriti (basic nature) of a person.

3. Typology of personality based on the trigunas, i.e. , sattva, rajas, and tamas.

Grouped people into two types, widely recognized.(i) Introverts: People who prefer to be alone, tend to avoid others, withdraw themselves in the face of emotional conflicts, and are shy.(ii) Extraverts: Sociable, outgoing, drawn to occupations that allow dealing directly with people, and react to stress by trying to lose themselves among people and social activity.

Tried to identify psycho-social risk factors and discovered types.(i) Type-A (susceptible to hypertension and coronary heart disease): Highly motivated, impatience, feel short of time, be in a great hurry, and feel like being always burdened with work. Such people find it difficult to slow down and relax,(ii) Type-B The absence of Type-A traits.Moris continued this research and identified:(iii) Type-C (prone to cancer): Co-operative, unassertive patient, suppress negative emotion, show compliance to authority.(iv) Type-D (prone to depression).Personality typologies are usually too simplistic as human behaviour is highly complex and variable. Assigning people to a particular personality type is difficult. People do not fit into such simple categorization schemes so neatly.

A trait is considered as a relatively enduring attribute or quality on which one individual differ another. They are:Relatively Stable over Time— Generally consistent across situations.— Their strengths and combination vary across individuals leading to individual differences in personality.

(i) Individuals possess a number of traits—dynamic in nature and determine behaviour.(ii) Analysed words people use to describe themselves—provided a basic for understanding human personality—and categorized them into—— Cardinal Traits: highly generalized disposition, indicates the goal around . which a person’s entire life revolves, e.g., Hitler’s Nazism.— Central Traits: less pervasive in effect, but still quite generalized disposition. e.g., sincere.— Secondary trai least generalized characteristics of a person, e.g., likes mangoes.(iii) The way an individual reacts to a situation depends on his/her traits.(iv) People sharing the same traits might express them in different ways.

(i) Identified primary traits from descriptive adjectives found in language.(ii) Applied factor analysis, a statistical technique to discover the common structure on which people differ from each other.— Source or Primary Traits (16): stable, building blocks of personality— described in terms of opposing tendencies.— Surface Traits: result out of the interaction of source traits.(iii) Developed Sixteen Personality Factor (16PF) Questionnaire for the assessment of personality.

(i) Reduced personality into, two broad dimensions which are biologically and genetically based and subsume a number of specific traits.— Neuroticism (anxious, moody, touchy, restless) us. Emotional stability (calm, even tempered, reliable)—the degree to which people have control over their feelings.— Extraversion (active, gregarious, impulsive, thrill seeking) vs. Introversion (passive, quiet, caution, reserved)—the degree to which people are socially outgoing or socially withdrawn.(ii) Later proposed a third dimension, Psychoticism (hostile, electric, and antisocial) vs. Sociability, considered to interact with the other two dimensions.(iii) Developed Eysenck Personality Questionnaires to study dimensions of personality. 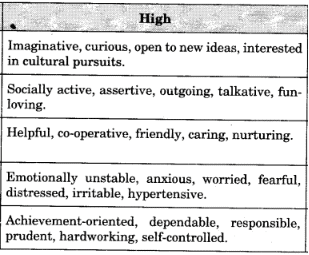 A Levels of Conciousness

(i) A reservoir of instinctive or animal drives—stores all ideas and .wishes that arise from sexual desires.(ii) Cannot be expressed openly and therefore are repressed or concealed from conscious awareness.(iii) Constant struggle to find a socially acceptable way to express unconscious awareness.(iv) Unsuccessful resolution of conflicts results in abnormal behaviour Approaches to the Unconscious

Psycho-analysis is a therapeutic procedure, the basic goal which is to bring repressed unconscious material to consciousness, thereby helping people to live in a more self-aware and integrated manner.

B Structure of Personality

(i) Repression: Anxiety provoking behaviours or thoughts are totally dismissed by the unconscious. ‘(ii) Projection: People attributes their own traits to others.(iii) Denial: A person totally refuses to accept reality.(iv) Reaction Formation: A person defends against anxiety by adopting behaviours opposite to his/her true feelings.(v) Rationalisation: A person tries to make unreasonable feelings or behaviour seem reasonable and acceptable.

• Oedipus Complex (Male)Love for mother, hostility towards the father, and fear of punishment or castration by the father.Accepts his father’s relationship with his mother and models his own behaviour after his father.

• Electra Complex (Female)Attaches her love to the father and tries to symbolically marry him and raise a family.Identifies with her mother and copies her behaviour as a means of getting (or sharing in) her father’s affection.