Langmular Isotherm:If A, B & AB represents the adsorbed, absorbent and the absorbed – adsorbent complex then, 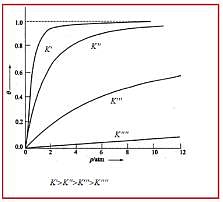 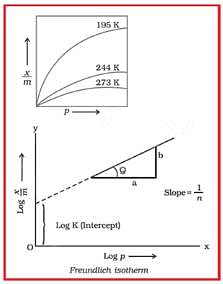 ColloidsDispersed Phase:The phase which is dispersed or scattered through the dispersion medium is called Dispersed phase or discontinuous phase.

Dispersion Medium:The phase in which the scattering is done is called the dispersion medium or continuous medium.

Methods of preparation of colloidsChemical Methods:

Micelle: Aggregates formed when the surfactant molecules in the water air interface become so packed in the monolayer that no more molecules can be accumulated with ease they accumulate in the bulk of the solution.At a given temperature and concentration, a micelle of a surfactant of monodispersed i.e., they contain same number of molecules usually between 25 to 100.Critical concentration for micelle formation decreases as the molecular weight of hydrocarbon chain of surfactant grows because in this case true solubility diminishes and the tendency of surfactant molecules to associate increases.