The document Rings, Ideals, Quotient Rings - Ring Theory Mathematics Notes | EduRev is a part of the Mathematics Course Algebra for IIT JAM Mathematics.
All you need of Mathematics at this link: Mathematics

In this course all rings A are commutative, that is, and have an identity element 1 (easily seen to be unique)

Multiplication will be denoted by juxtaposition, and simple facts used without comment, such as

Call a subset S of a ring A a subring if

Condition (ii) is easily seen to be equivalent to

the ring of Gaussian integers is a subring of C

with addition and multiplication mod n .

(Alternatively Zn may be deﬁned to be the quotient ring Z/nZ , deﬁned below)

the ring of polynomials over R .

Call a mapping f : A → B (where A and B are rings) a ring homomorphism if

in which case the following are easily checked:

An isomorphism is a bijective homomorphism, say f : A → B , in which case we write

It is easy to check that

A nonempty subset I of a ring A is called an ideal, written

In particular I is an additive subgroup of A , so we can form the quotient group the group of cosets of I ,

— only tricky bit is ﬁrst checking multiplication is well-deﬁned:

We call A/I a quotient ring.

is clearly a surjective ring homomorphism, called the natural map, whose kernel is

Thus all ideals are kernels of ring homomorphisms.

The converse is easy to check, so

The following important result is easy to verify: 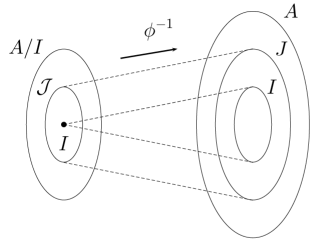 Theorem, by observing that the mapping f : Z → Zn where

f (z) = remainder after dividing z by n is a ring homomorphism with image Zn and kernel nZ.