A typical ball bearing is shown the Fig.14.2.1. The figure shown on the right side, with nomenclature, is the schematic representation of the actual bearing. 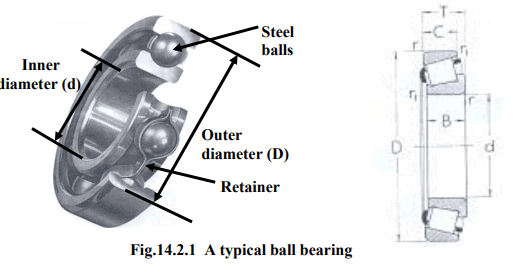 The bearing shown in the figure is called Single row deep groove ball bearing. It is used to carry radial load but it can also take up considerable amount of axial load. The retainer keeps the steel balls in position and the groove below the steel balls is the inner ring and over it is the outer ring. The outer ring, called outer race, is normally placed inside a bearing housing which is fixed, while the inner race holds the rotating shaft. Therefore, a seat of diameter d and width B is provided on the shaft to press fit the bearing. The arrangement for housing a bearing is shown through a schematic diagram, Fig.14.2.2. 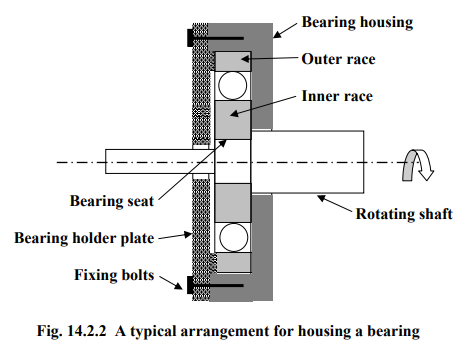 The figure Fig.14.2.3 is a Single row Angular Contact Ball Bearing. It is mostly used for radial loads and heavy axial loads.

Double Row Angular Contact Bearing, shown in Fig.14.2.4, has two rows of balls. Axial displacement of the shaft can be kept very small even for axial loads of varying magnitude. 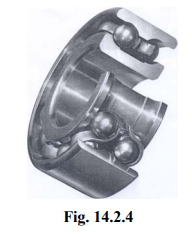 This Fig.14.2.5 shows a Single thrust ball bearing. It is mostly used for unidirectional axial load. 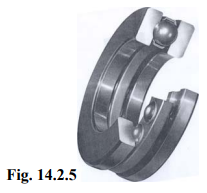 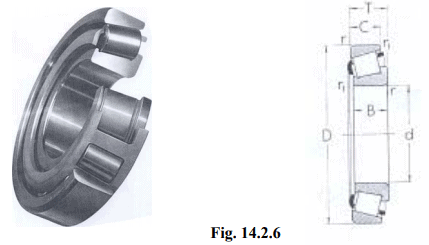 A spherical roller bearing, shown in the Fig.14.2.7, has self aligning property. It is mainly used for heavy axial loads. However, considerable amount of loads in either direction can also be applied. 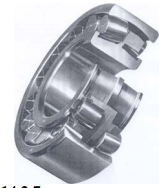 For heavy radial load and high speed use, cylindrical roller bearings, shown in the Fig.14.2.8, are used. Within certain limit, relative axial displacement of the shaft and the bearing housing is permitted for this type of bearings. 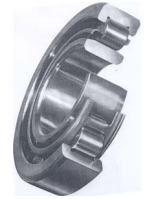 Some of the important terminologies which are required for selection of rolling contact bearing are given below.

Rating life: Rating life is defined as the life of a group of apparently identical ball or roller bearings, in number of revolutions or hours, rotating at a given speed, so that 90% of the bearings will complete or exceed before any indication of failure occur. Suppose we consider 100 apparently identical bearings. All the 100 bearings are put onto a shaft rotating at a given speed while it is also acted upon by a load. After some time, one after another, failure of bearings will be observed. When in this process, the tenth bearing fails, then the number of revolutions or hours lapsed is recorded. These figures recorded give the rating life of the bearings or simply L10 life (10 % failure). Similarly, L50 means, 50 % of the bearings are operational. It is known as median life. Fig.14.2.3 defines the life of rolling contact bearings. 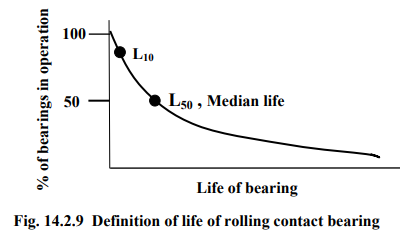 If two groups of identical bearings are tested under loads P1 and P2 for respective lives of L1 and L2 , then,

L : life in millions of revolution or life in hours

a : constant which is 3 for ball bearings and 10/3 for roller bearings

It is that load which a group of apparently identical bearings can withstand for a rating life of one million revolutions.

Where, C is the basic or dynamic load rating

Therefore, for a given load and a given life the value of C represents the load carrying capacity of the bearing for one million revolutions. This value of C, for the purpose of bearing selection, should be lower than that given in the manufacturer’s catalogue. Normally the basic or the dynamic load rating as prescribed in the manufacturer’s catalogue is a conservative value, therefore the chances of failure of bearing is very less.

The values of X and Y are found from the chart whose typical format and few representative values are given below. 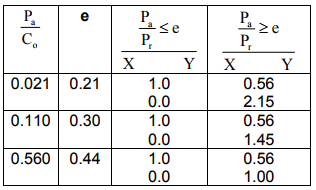 The factor, Co is  obtained from the bearing catalogue

Depending on the shaft diameter and magnitude of radial and axial load a suitable type of bearing is to be chosen from the manufacturer’s catalogue, either a ball bearing or a roller bearing. The equivalent radial load is to be determined from equation (14.2.3). If it is a tapered bearing then manufacturer’s catalogue is to be consulted for the equation given for equivalent radial load. The value of dynamic load rating C is calculated for the given bearing life and equivalent radial load. From the known value of C, a suitable bearing of size that conforms to the shaft is to be chosen. However, some augmentation in the shaft size may be required after a proper bearing is chosen.