Free atoms do not rotate or vibrate. For an oscillatory or a rotational motion of a pendulum, one end has to be tied or fixed to some point.  In molecules such a fixed point is the center of mass.  The atoms in a molecule are held together by chemical bonds.  The rotational and vibrational energies are usually much smaller than the energies required to break chemical bonds. The rotational energies correspond to the microwave region of electromagnetic radiation (3x1010 to 3x1012 Hz; energy range around 10 to100 J/mol) and the vibrational energies are in the infrared region (3x1012 to 3x1014 Hz; energy range around 10kJ/mol) of the electromagnetic radiation.  For rigid rotors (no vibration during rotation) and harmonic oscillators (wherein there are equal displacements of atoms on either side of the center of mass) there are simple formulae characterizing the molecular energy levels.  In real life, molecules rotate and vibrate simultaneously and high speed rotations affect vibrations and vice versa. However, in our introductory view of spectroscopy we will simplify the picture as much as possible.  We will first take up rotational spectroscopy of diatomic molecules.

The center of mass is defined by equating the moments on both segments of the molecular axis.

The moment of inertia is defined by

Substituting the above equation in (13.3), we get

Where μ, the reduced mass is given by

The rotation of a diatomic is equivalent to a “rotation” of a mass μ at a distance of r from the origin C. The kinetic energy of this rotational motion is K.E. =  L2/2I   where L is the angular momentum,  Iω where ω is the angular (rotational) velocity in radians/sec.  The operator for L2 is the same as the operator L2 for the angular momentum of hydrogen atom and the solutions of the operator equations L2 Υlm  =  l (l + 1) Ylm, where Ylm are the spherical harmonics which have been studied in lecture 3.

The quantized rotational energy levels for this diatomic are

The energy differences between two rotational levels is usually expressed in cm-1.  The wave number corresponding to a given ∆E  is given by

The energy  levels in cm-1 are therefore,

The rotational energy levels of a diatomic molecule are shown in Fig. 13.2. 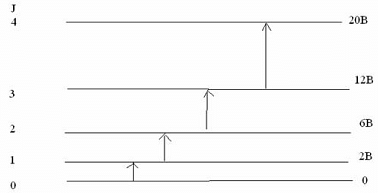 Fig. 13.2   Rotational energy levels of a rigid diatomic molecule and the allowed  transitions.

The selection rule for a rotational transition is,

In addition to this requirement, the molecule has to possess a dipole moment.  As a dipolar molecule rotates, the rotating dipole constitutes the transition dipole operator μ. Molecules such as HCl and CO will show rotational spectra while H2, Cl2 and CO2 will not.  The rotational spectrum will appear as follows

The rotational levels are degenerate.  Just as there are three p orbitals for l = 1, for J = 1, there are 3 degenerate rotational states.  The degeneracy for a given value of J is 2J + 1.  The Boltzmann factor gets modified due to this degeneracy as follows

The implication of this is that the rotational population of the J = 1 level is often more than the population of the J = 0 levels since their degeneracies are 3 and 1 r espectively. W hen molecules rotate with great speeds, they cannot be treated as rigid any more. There are distortions due to centrifugal and other forces.  The modification of rotational energies by considering the centrifugal distortion alone is

Where the centrifugal distortion constant D is given by

The only new term in Eq (13.13) is the force constant k which will be discussed when we study molecular vibrations.

Linear molecules such as OCS and HC≡CCl  have spectra similar to diatomics.  In diatomics as well as linear triatomics,  IA = IB; IC = 0.   IA, IB and IC are the three moments of inertia of molecules along three independent axes of rotation.  Just as any translation can be decomposed into three independent components along three axes such as x, y and z, any rotation can be decomposed into rotations along three axes A, B, and C.  The way to choose these axes is to have the simplest values of IA, IB and IC. Since triatomics are heavier than the constituent diatomics, their moments of inertia are larger and the values of rotational constants, B, are smaller, in the range of 1 cm-1.  The value of IA or IB determined from the B value gives the total length of the triatomic.  To determine the two bond lengths in the linear triatomic, we need to determine the moment of inertia IA' of an isotope of the triatomic.  From two values of IA and IA' , we can determine the two bond lengths.

The rotational spectra of asymmetric molecules for whom IA ≠ IB ≠ IC can be quite complicated. For symmetric tops, two moments of inertia are  equal ie.,

The rotational energies of a symmetric top are given by

The moments of intertia are related to B and A as

As the energy depends on K2, energies for states with + K and – K are doubly degenerate. Thus there will be J + 1 levels and (2J + 1) states for each values of J.

The selection rules for the symmetric top are,

It can be easily shown that

By using rotational or microwave spectroscopy, very accurate values of bond lengths can be obtained. For example, in HCN, the C-H length is 0.106317 ± 0.000005 nm and the CN bond length is 0.115535 ± 0.000006 nm.  The principle of the microwave oven involves heating the molecules of water through high speed rotations induced by microwaves. The glass container containing water however remains cold since it does not contain rotating dipoles.

Vibrations and Rotations of a diatomic

You have noticed in your earlier studies that simple pendulums or stretched strings exhibit simple harmonic motion about their equilibrium positions.  Molecules also exhibit oscillatory motions.  A diatomic oscillates about its equilibrium geometry.  The quantized vibration energies  Eυ of a harmonic oscillator are 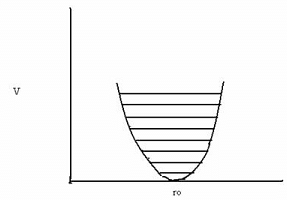 On either sides of the equilibrium bond length r0, the PE rises as a symmetric quadratic function (a parabola).  The vibrational wavefunctions can be obtained by solving the Schrodinger equation.  The Hamiltonian operator (for energy) now consists of a kinetic energy term and a potential energy term V as shown in Fig. 13.4 and the solutions for energy, Ev have already been given in Eq.(13.20).  The selection rules for the harmonic oscillator are:

We will see  several equally spaced lines (spacing hν) corresponding to the transitions 0→1, 1→2,  2→3 and so on.  The first transition will be the most intense as the state with v = 0 is the most populated. In actual diatomics, the potential is anharmonic.  A good description of an anharmonic oscillator is given by the Morse function.

Here xe, is called the anharmonicity constant whose value is near 0.01.  It can be easily deduced from the above formula that the vibrational energy levels for large υ start bunching together. 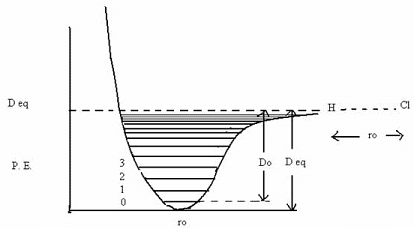 Fig. 13. 5.   The Morse potential and the energy levels therein.  Note the difference between the dissociation energy Do and the depth Deq.  All molecules have a minimum of the zero point energy of hν/2 corresponding to the ν = 0 state.  This is a consequence of the uncertainty principle!

The energy level diagram and the spectrum corresponding to the diagram are shown in Fig.  (13.6).

If the potentials energy functions for all the motions can be assumed to be harmonic, then the 3N-6 modes can be categorized into 3N-6 normal modes. Consider the example of water.  There are three atoms and 3N-6 = 3 normal modes.  In terms of the potential energy functions for vibrations, there are three functions: one each corresponding to each O-H bond and one corresponding to the H-O-H bending.  In terms of the individual bond vibrations, the vibrational motion can appear quite complex. The total potential energy P.E. may be written as: 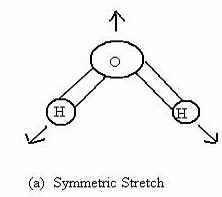 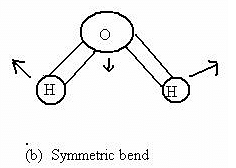 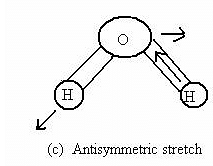 Different molecules can be easily identified by their normal mode frequencies.  In addition to these modes, overtones (2ν1, 3ν2, etc.),  combination bonds (ν1 + ν2, 2ν1 + ν2, ν1 +ν2 +ν3 …),  and difference bands (ν1 - ν2,  ν1 +ν2 - ν3) can be observed.  Since a large number of rotational and vibrational levels are closely spaced they provide a rich base for setting up lasers when the upper levels are populated.  As in the case of diatomics, rotational lines are richly dispersed in vibrational spectra of polyatomics.  The concept of normal modes can be extended to solids and liquids too.  Since in a solid, there are a very large number of atoms (of the order of Avogadro number), there are 3N-6 normal modes.  These are characterized as phonons, which correspond to collective motions of atoms in a solid.

IR spectroscopy has grown into an extremely versatile analytical tool.  Most organic and inorganic groups (such as CH3, -C=C, M-C≡0) have characteristic frequencies and these frequencies provides finger prints, using which the groups in newly synthesized molecules can be identified.  Although we can not “see” molecules, through various spectral methods, we can identify atoms, groups, bond lengths, relative locations (cis/trans, endo/exo) and so on.  The IR frequencies of a few common groups are given in Table 13.2.

Table 13.2  Characteristic frequencies (in cm-1) of some molecular groups.

In special conformations, the group frequencies can deviate from the values in the table significantly.